With some housing business to take care of in Fort Collins, and my sister-in-law's birthday, we needed to be up in the Fort for the weekend. But, J and our car were already up there, so the choices were either to have her come back to pick me up; rent a car; find a rideshare; or ride the (darn) bike (RTDB).

Luckily, the temps were in the 50s for a decent December day. Unluckily, wind gusts were in the 20s/30s. I did get blown off the road for a brief moment when I wasn't crouched enough in the correct position, but other than that it was fairly manageable.

I've ridden this route 5 or 6 times for various reasons (including meeting J at a flea market, and riding to the Great American Beer Festival), and I'm now forming some more informed opinions (and vehement disagreement with Google Maps) on the "best" route. Some people have asked about this route, so that's the purpose of this post.

The worst part of the route is what I call the "Death Triangle" formed by the major freeways just north of Denver: 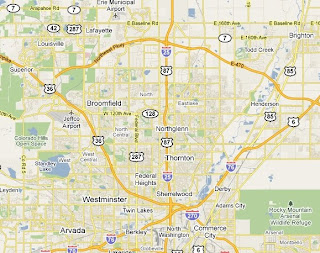 There is no real good way through here. I've tried the West side (relative to I-25) through Arvada/Broomfield/Westminster; the East side through Thornton; as well as some of both, crossing over in Thornton/Northglenn. There is no really good route, as it is a big time suck of stop lights and dangerous traffic.

Interestingly, the default Google Map Bicycling route suggests taking Huron St., which has a narrow shoulder and many stoplights and isn't any better than routes on the East, before suggesting Co Rd 3, which is a washboarded dirt road. (If you're looking for a Roubaix-style adventure, that one's for you). In short, the Google map option is a poor one.

In general, I suggest the following for the experienced distance rider who is looking for an efficient route:
* Use the extensive bike paths when you're south of the Death Triangle, where you can get to downtown Denver or Aurora. They're twisty and a bit longer, but both faster (lack of stoplights) and much safer.
* To get through the Death Triangle, I suggest staying East of I-25 and using Grant and Washington street. These roads are crowded, shoulderless, and unsafe, but so are most alternatives. I prefer these roads, however, because much of it is 3 lanes, so there is more room for cars to give you the whole lane if necessary; there are sidewalks or occasional parallel streets for the most part if traffic is really bad; the worst parts of the road are rolling hills, which I content are safer, because you have increased visibility going uphill and better speed matching going downhill.
* The quickest, most straightforward route to continue North is staying on the Frontage road. It is less scenic and has the drawback of being near the freeway, but it is easier to cruise, has a decent shoulder, and you don't have to look at a map to find out where the Weld County dirt roads are/aren't.
* If you want better scenery, I'd stay East of I-25 closer to Denver, and West near Dacono or further North. But be sure to stay sufficiently West to avoid dirt roads.
* Alternatively, Hwy 85 has been suggested to the East due to a wider shoulder, but certainly adds miles if you want to get between Denver and Fort Collins.
* Finally, if you're from out of town and just kind of want to ride across this part of the state but don't really -need- to go to between the towns by direct route, ride to Estes first and then take Peak-to-Peak highway towards Golden instead!

Anyway, those are my observations. Please share any that you may have if you ride this route. The most important observation is that the top suggestion for bicycling from Google maps is highly sub-optimal (Huron Street isn't that good unless you use the sidewalk only), and the biggest piece missing from a good bike route is a 4-5 mile N-S section south of I-470, so your concerns for timing should take into consideration of trying to avoid rush hour or lighting/visibility issues near Denver, as well as the slowed pace.
Posted by mike_hinterberg at 2:38 PM