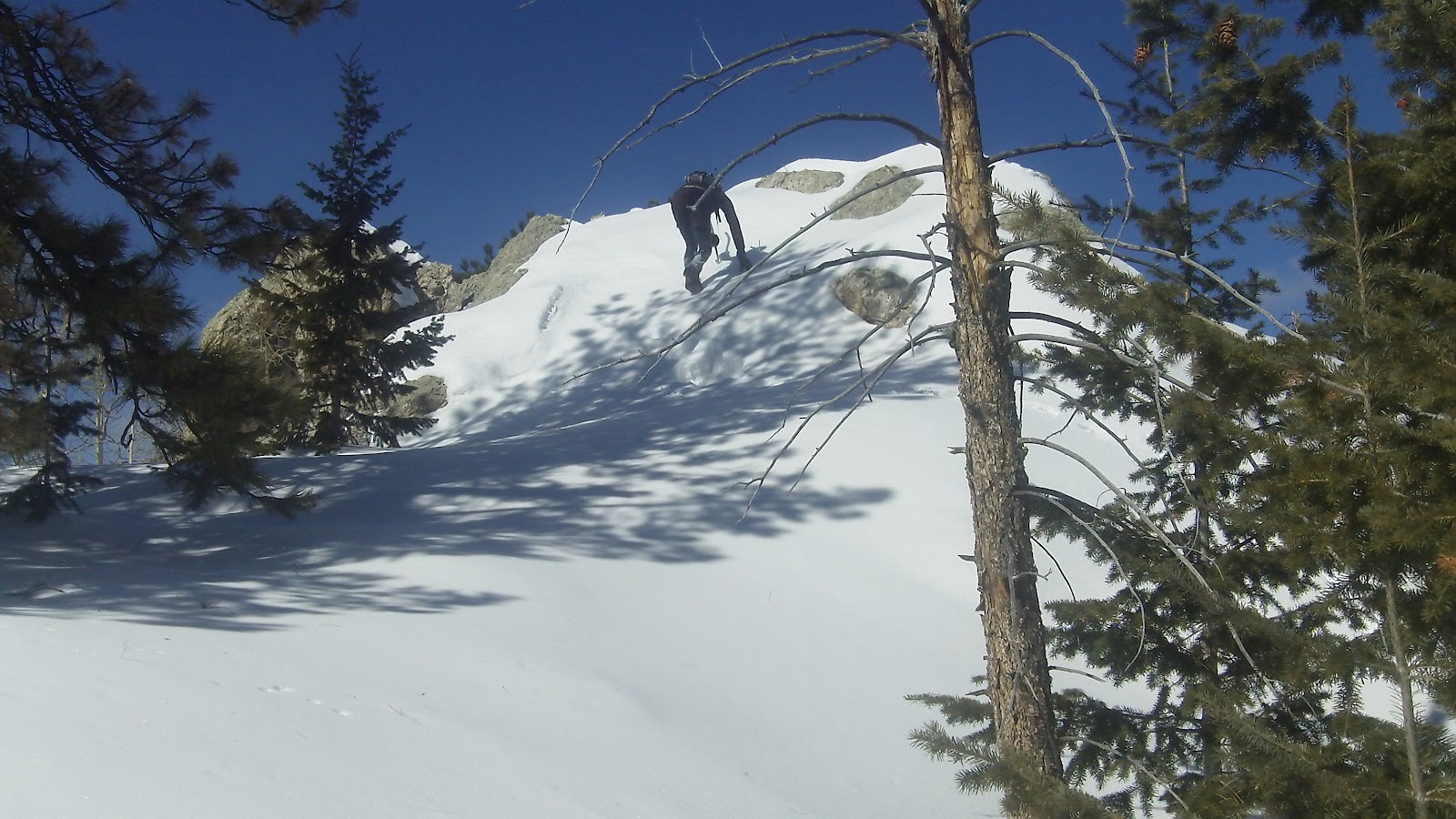 
Nick hatched another plan to bag some local Larimer County peaks on Sunday. While a longer route would clearly be manageable in the summer, it was dubious in winter, since any time estimates had to be derived not from the standard multiplication by the bushwhack factor (BWF), but instead by the dreaded postholing bushwhack factor (PBWF), in addition to the recent plague of the wind factor (MFWF). So it was unlikely that we would get many miles of running, but it was still more interesting than piling on road miles, again, and an alpine start (well, drive) from Nick's house would guarantee being done by noon. So I didn't want to miss out.

First up was a 700' climb in just over a mile, up the backside of Rist Canyon Road. This was just a warmup to get into the foothills...but first, let me give Rist Canyon Rd its due.
Rist Canyon
Rist Canyon is (in)famous around town for many reasons. Mostly, it's a popular cycling (if not motorcycling) road in decent weather; in fact, there's an annual road race. Not surprisingly, it's a popular training route -- to the consternation of local non-cycling residents, whose angry newspaper letters are also an annual occurrence. (Trying to be a peacemaker, my opinion remains Drivers, don't overdrive your viewing distance and Cyclists, single up and stay to the right). Training groups include not only the championship CSU cycling team, but also legends like the hiking boot man, who may or may not have been a pro cyclist.
Anyway, Rist Canyon showed up in popular bike route searches when we moved here in 2006, so the first weekend we were here, I was anxious to ride my aluminum steed along the classic Buckhorn-Rist loop, which ends up being a convenient 100k from my house. Ignorantly, I did the loop clockwise, which is essentially the wrong way, by ascending the nice straightaway and descending the switchbacks. I overshot the first switchback dramatically and was thankful for being safe -- and thus was introduced to the more serious cycling to be found in Colorado.
By descending the backside, which has nice views and a convenient runout to bleed off speed before the Stove Prairie intersection, it's easy to hit 50+ mph on the bike -- and I'm a lightweight, cautious descender. Others are able to crack 60. But I was even more surprised to learn of another subculture that was able to hit 70+ mph...
On a freaking skateboard!
Videos of this used to be available publicly online, and there was talk of organized and disorganized skating up there, but it seems skateboards draw public ire even more than spandex does, so they have to keep it underground. Keep on rollin', guys!
...
So that's Rist Canyon. Of course, people rarely get out to explore around the area, so I was intrigued to do so.
First up, along public Co Rd 41 heading South from the summit of Rist Canyon Road, is an open summit with a communication tower: 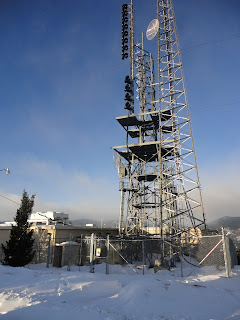 Followed by the summit of Buckhorn itself: 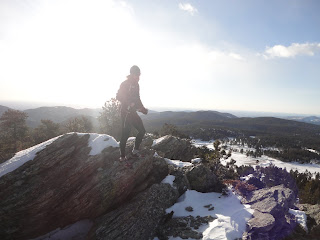 This was easy enough, with rewarding views -- the worst part was perhaps the ice on Co Rd 41.
Next up was Pt' 8415 and Mt. Ethel. Being located in heavy tree cover and shade, the snow was deeper -- often crotch-deep, which, although it's a relative measurement, serves the purpose (generally, and rarely, only superseded by "armpit deep") and the going was slow. But this summit was more photogenic and interesting, with a summit pole and random beer bottle on top. Since the summit, only slightly lower than neighboring Ethel, ended up being sufficiently interesting yet unnamed, Nick and I agreed to "Leila Peak", with Jessica's late, great-aunt Leila being a sister to her great-aunt Ethel. (Also, her late husband Clyde worked the railroad in the hills of Western Nebraska into Colorado). 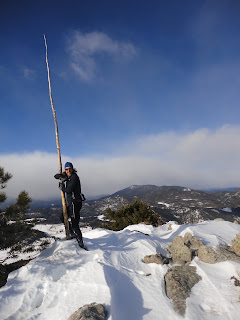 Also at the summit was, unfortunately, constant wind, so we didn't linger too long. The route to Ethel was clearly visible, but was to involve significant travel through the forest. And, the quickest (or, at least shortest) descent was a direct downclimb: 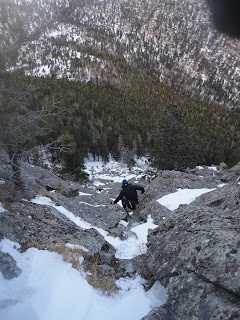 Being in the shade and the wind was a bad deal with light gloves on, as my fingers froze while I still needed them for group. We were both anxious to be out of the wind and into the trees...only to deal with more breakable crust on top of deep snow.
More slogging, and eventually we made it to an unnamed subpeak connected to the Ethel Ridge, but still had another descent and climb up Ethel proper. I think we generally nailed the orienteering for the day up until this point, but we could have tacked more to the left and avoided some unnecessary elevation, at the expense of having been in the deeper snow in the trees. So, it was an extra-credit sub-summit.
More slogging over to Ethel, and we knew it would be the last summit of the day. 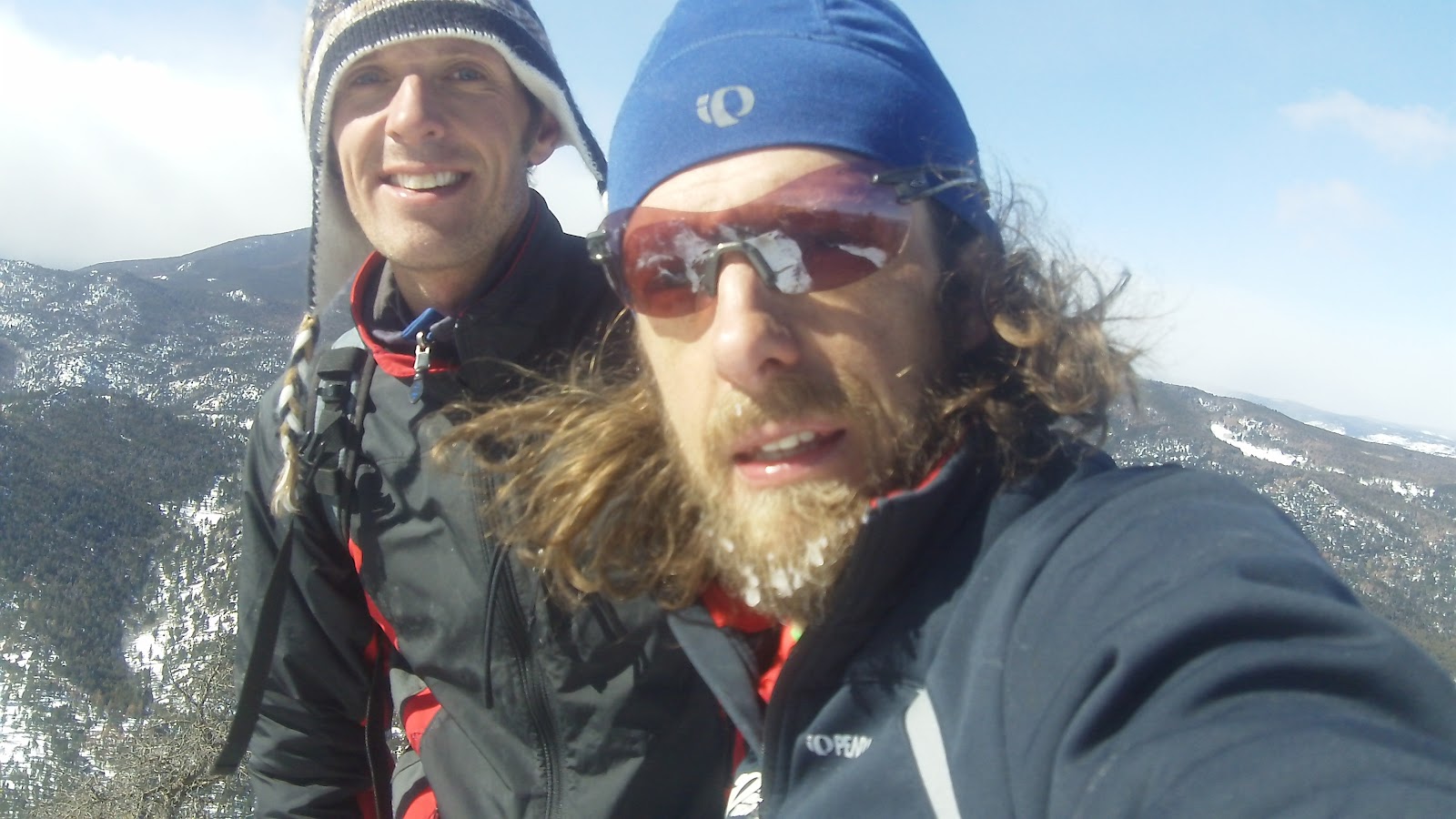 We did not find a rumored summit register, but it could very well have been buried in snow. All that remained was a final descent to Stove Prairie Road -- but it was also the longest stretch of tree cover and deep snow yet, occasionally slowed down further by some icy boulder downclimbing.
Finally, we popped out directly on Stove Prairie Road, and were ironically appreciative to be able to run on the road again, just about a mile from the car, although I didn't have feeling in either foot. At the intersection, we met local runners Wes and Debbie, who were friendly and have been running in the Stove Prairie area for years. They told us that Old Flowers Rd. was an icy mess, so I guess we didn't miss out on that.
All told, not many miles, but a fun day in the hills. Specificity for WS100 training? Not so much, but Nick's interest in peak-bagging gave me a secret idea about how to beat him at WS100 (you heard it here first) by distracting him...with another "special" summit list in June.
Posted by mike_hinterberg at 9:33 AM 1 comment: 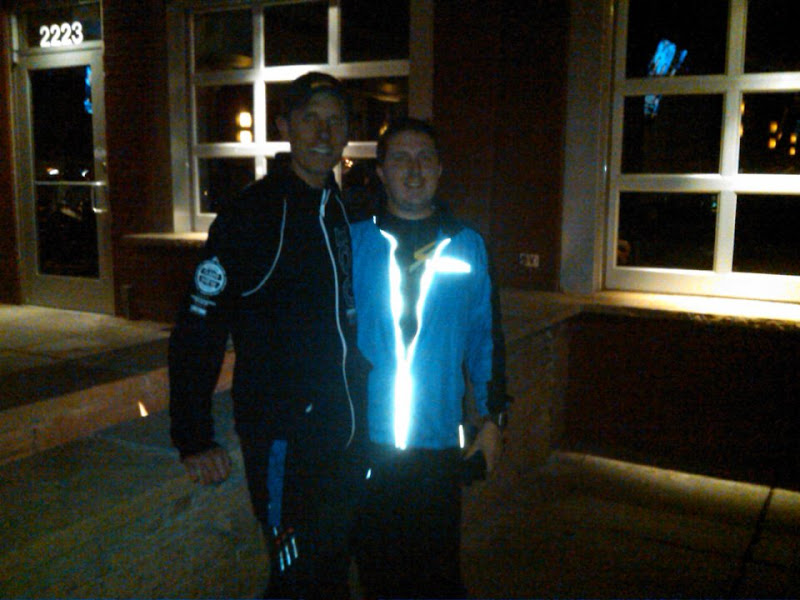 My own introduction into seeing marathon running as "normal" is mostly based on two influences. The second influential event was when J and friends trained for and successfully walked the San Diego RnR marathon in 2003. Seeing them finish, and have fun in a large crowd; and then seeing and meeting Neil, who ran it and had fun (then subsequently encouraged me to train to run a half marathon), got me set to run for the next 8+ years. If nothing else, I didn't want to be left out!

But before all that was EdGe. My senior year in Madison, I lived in a house near Lake Monona with 4 other people. We all had a great time together, and one of those roommates was Corina -- the only girl, but tough enough to withstand our shenanigans and keep our place respectable. Corina was dating Ed, who was studying up in the frozen tundra of Houghton, Michigan. He was a nice enough guy with a great sense of humour, but had one odd quirk:

He enjoyed running marathons. This meant, occasionally when visiting, he would go out for mind-boggling long runs, perhaps even at weird times of day (like the early morning). Who does that?! I thought marathons were an African thing that would kill a "normal" person. But this was the first time in my life I had ever heard of somebody doing something like that for fun.

Over the years and distances, we've been happy to hear how Corina and Ed and their growing family are doing. By now, he's been doing marathons in multiple states, and checked off Colorado on his list....by doing the Leadville marathon. He's moved up to doing 50 milers, and first became an Ironman last year. He can't be stopped, despite a hectic international travel schedule and raising a family. One of these days, we'll actually get to run in the same race!

So I was happy to meet him in Denver for the Wednesday night Highland Tap and Burger run. I hadn't done this run before, and we were a bit early, wondering where everyone was. But by 6:15, dozens had gathered, and we were off for some sort of loop of unknown duration around the city. 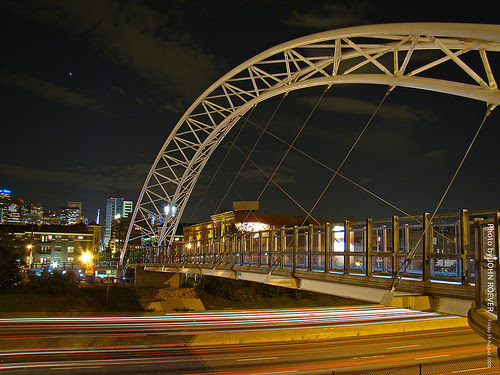 It was nice to catch up with Ed, and to run over the iconic Highlands bridge for the first time. Our loop ended up being 4M (online, there is mention of a 5k and 5M run, but I think the routes are occasionally altered). We headed back and met Ed's brother-in-law Kyle, and enjoyed some decent (and free!) garlic bread and pasta, combined with Avery beer specials, although the best deal is the always-$3 HTB House Ale (O'Dell's Levity).
Posted by mike_hinterberg at 3:45 PM No comments: 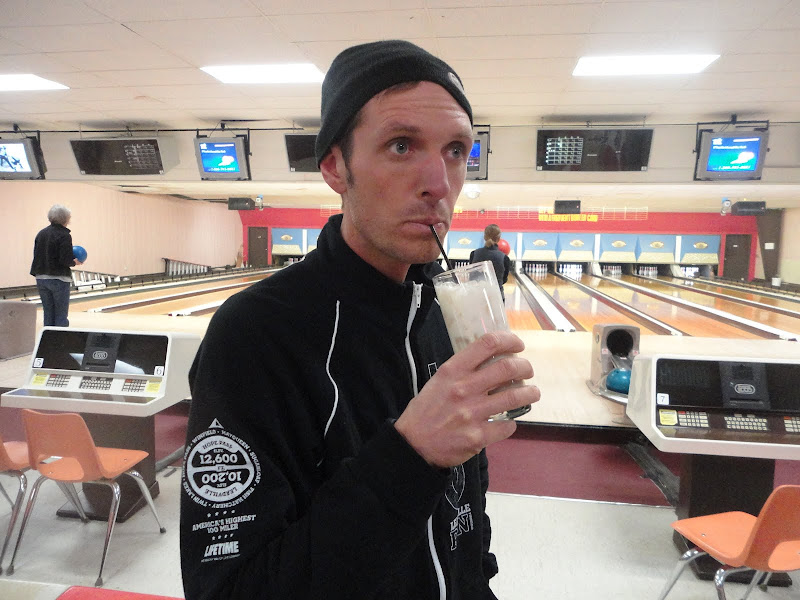 "Bowling with Altitude" in Leadville.
Classically old-school. Not a bad place to get a large order of fries for $2, too.
Posted by mike_hinterberg at 7:42 PM 5 comments:

After a time (or perhaps age), resort skiing loses its luster. Several friends I've talked to this year either didn't buy passes for the first time in years, or aren't as excited to go when thinking about the long drive in I-70 weekend traffic to crowded slopes, lift lines, and exorbitant prices.

Enter Loveland Ski area. For our first visit, on Super Bowl Sunday (one of the best days to ski all year), we were treated to close (and free) parking in just over an hour and a half of drive time, with no lift lines and a sunny, windless day. Combine this with more practice on the tele skis, and both my heels and mind were free enough to enjoy resort skiing once more. 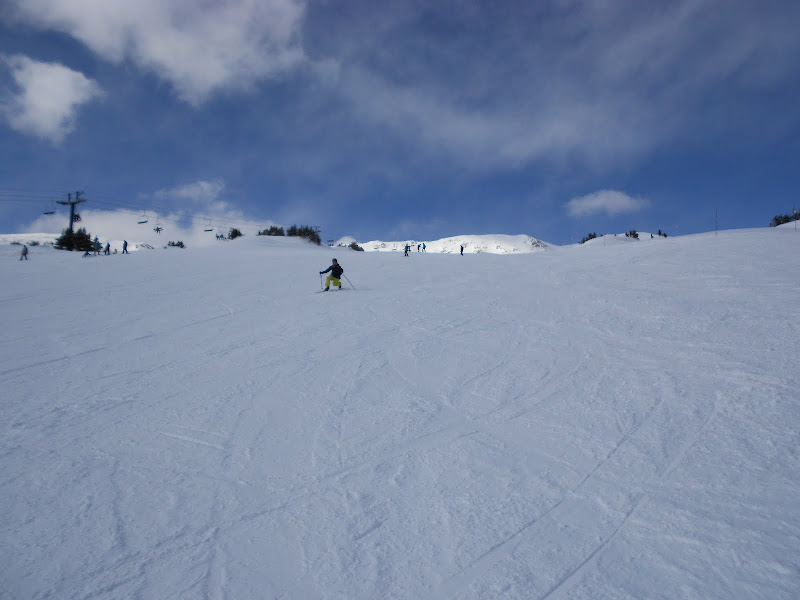 Although we got less snow than Denver and the surrounding foothills, we still had a sizable enough February snowfall to make it a winter wonderland in town.

Nighttime snow is perfect for cooling my muffins, so I can eat them faster after taking them out of the oven: 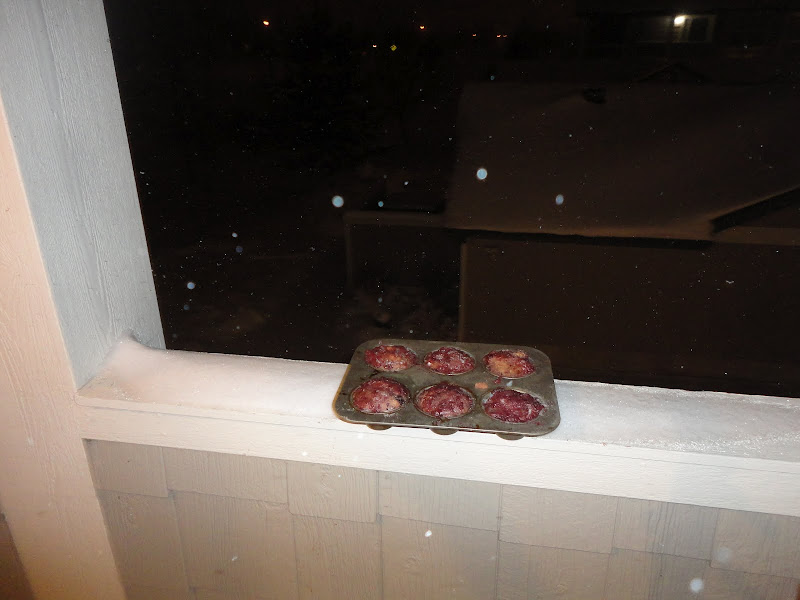 Of course, snow in town on a weekend doesn't mean everyone shacks up and watches TV; rather, everyone heads out to play.

First up was a sunrise run with Nick and Sarah up Redstone Canyon. We tracked some additional footprints in the snow, eventually catching up to Marie: 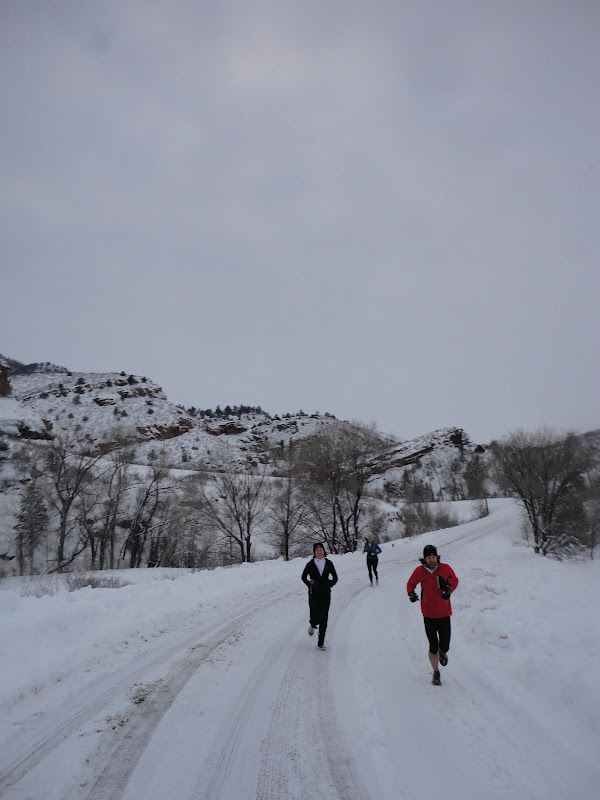 I had a great time chatting with them under the lightly falling snow, and the miles went by quickly.

Back in town, I met J, Bogdan, and Irina at Pineridge. Jax was cleared out of XC ski rentals, so Bogdan and Irina went with snowshoes. Either one was a great choice in knee-deep snow: 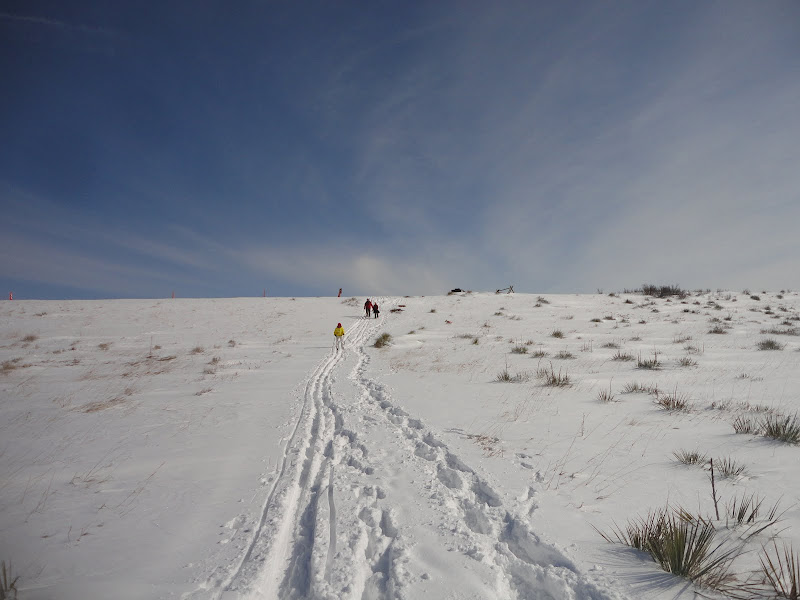 Among other folks out at play was this guy, with his sleeping young daughter in a sled. And, nothing says sleeping toddler like a skull and crossbones flag, of course: 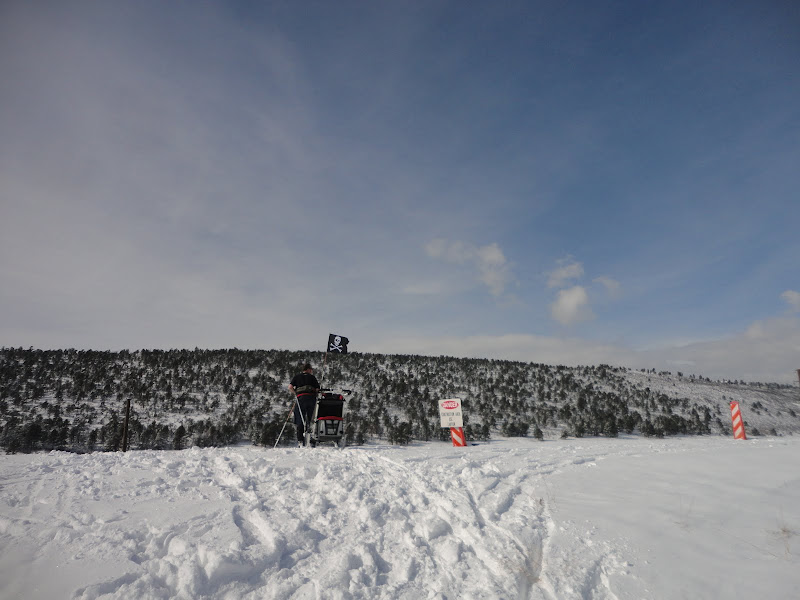 I love the rare opportunities to ski very close to town: the feel of the terrain really changes, and new possibilities open up in the snow.
This guy built his own jump to hop the fence near the dogpark...and he nailed it: 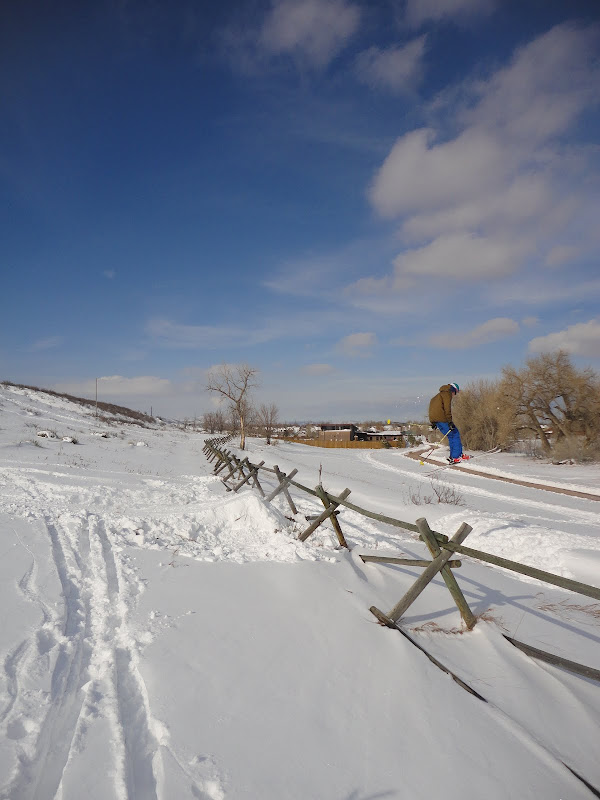 Every other rock-free hill in town was dotted with kids on sleds.
What a beautiful day!
Posted by mike_hinterberg at 5:52 PM 2 comments:

We'll be focused on causes "for the cure" (Don't sue me, I'm using a small "f", small "c" ) based on real science and less politics) instead. This appears to be a common sentiment.

And, by giving to other organizations instead of Komen, it will be nice not to support ludicrously obesogenic products with pink ribbons on them. Less obesity = less cancer deaths.

Update: Komen reversed its controversial funding decisions, but it appears the PR damage was already done....
Posted by mike_hinterberg at 7:44 AM 3 comments: