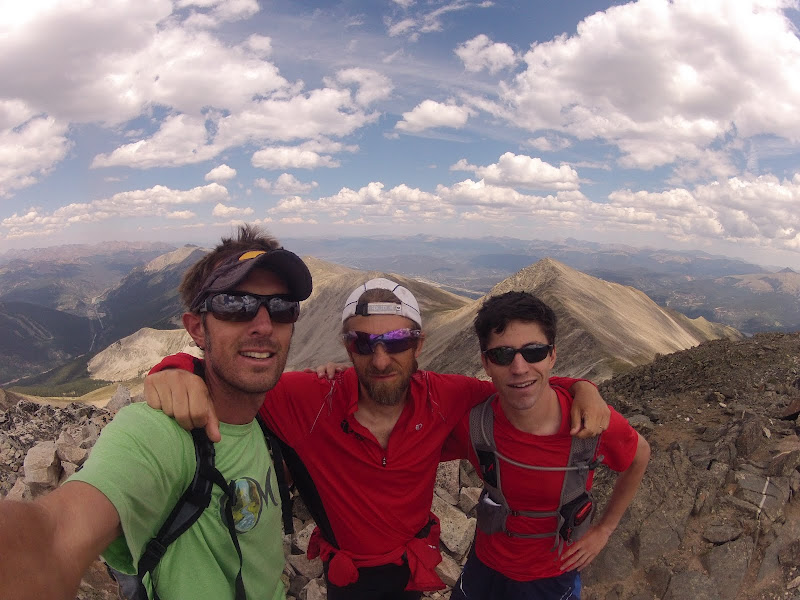 After Brandon's Saturday night Leadville Run, and another great day of weather in the mountains, Nick and I, along with Andy Gisler, decided to take advantage of another mellow running/hiking opportunity before wrapping up the weekend.
First, though, we watched a replay of the women's Olympic Marathon race, drank some coffee, and hung out a bit, before finally ambling out to the mountains just before noon. But what a leisurely Sunday!

On tap was a ridge run Centennial 13er combo of Atlantic and Pacific ("Coast-to-Coast") combined with Crystal Peak. In just over 8.5 miles, we'd have a short run/hike into the lovely Mayflower Gulch, and then a straightforward Class 2 hike up to the Crystal-Atlantic saddle, before hitting C-P-A. I've enjoyed visiting the gulch previously in winter. The weather was cooperating, and we were all game for jogging and power hiking after the previous day's near-40 miles at elevation.

At least, I thought I was.

After just over 10 minutes on the trail, we bushwhacked across the creek, finding relatively easy passage through the willows and into the trees, onto the shoulder of Mayflower Hill. Skirting below it, we continued onto larger talus fields and then sidehilled below Pacific's summit, eventually getting below the Pacific-Crystal saddle. We headed up the saddle, which had one false summit lump and some impressive notchy views from the top: 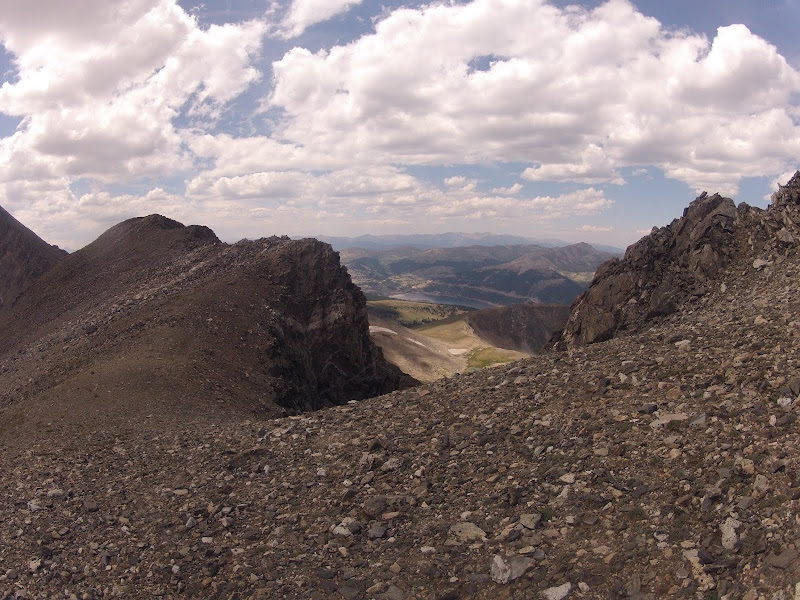 And then headed up to the Crystal summit.

Somewhere along the way, though, the previous day..2 days...week's training caught up with me. Standing with both feet on a large rock, I felt it wobble, only to look down and see that it was completely stationary. My legs were not too achey, but were shaking on the rocks, and my head was swimming a bit. Not sure if one was causing the other. I ate some extra food, not feeling hungry or otherwise low on calories, but it didn't make it better. I could still move fine, just slowly. By the time I caught up at the Crystal summit, I told the guys that I was going to head down while they continued. I hated having to bail -- especially on a particular route I was excited to do -- and watched enviously as they headed up towards the cool looking notch on the top of Pacific Peak. But I knew I reached my limit for the week. If I were solo, I could have gone slower and/or taken a nap, but with group dynamics I had crossed the line from being slow to being a potential liability if I pushed anything harder (since I knew the route down was easy and would only get easier).

After a bit, though, it was actually kind of cool to watch 2 red dots proceed upward on the mountain, and track their progress. I took my time heading down off of Crystal as I kept watching their progress to Pacific. Soon enough, they disappeared around the other side.

I headed down deliberately off of Crystal, and a bit lower off of the talus and onto the tundra. Some wildflowers were still showing, and I began to feel better, enough to jog along the tundra towards the rockier saddle of Mayflower Hill. I got closer to another group that had descended off of Pacific, but I was below them near the Mayflower Saddle, so I headed up towards them. In hindsight, the quickest way is to stay low along the Pacific Creek drainage and only really climb below the Mayflower-Pacific saddle and Pacific-Crystal saddle -- essentially what Roach suggests in the 13er book.

Taking my time along the tundra and boulder fields, I was able to appreciate small details that I normally don't, such as some of the striped and smoother rocks along the creek, impressive larger pieces of quartz, and some igneous rocks as well. Along the boulders, I had to be careful, especially at face level(!), for spiders that cast a single tripwire between rocks; once the line was disturbed, the bulbous spiders dropped quickly to the ground and scurried away.

I was feeling better by the time I re-climbed the Mayflower Saddle, and I had a clear view of Atlantic. Scanning the ridge, I finally made out 2 dots just coming off of the summit, with another pair just about off of the ridge. I was happy to know of their success and being able to estimate their arrival time, so to make lemonade out of my otherwise single-summit, I made the extra effort to head up to the summit of Mayflower Hill. And, man, the 13ers are getting crowded too -- why not enjoy an uncrowded 12er? 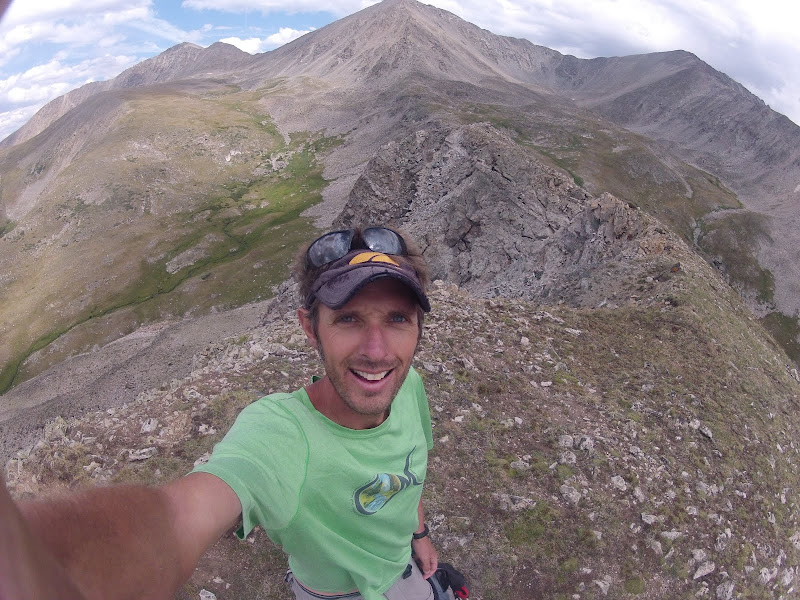 The Hill has a faint trail on top, and a few candidate cairns vying for true summit status. I enjoyed the views from the top, knowing that I could either retreat the way I came, or ride the ridge as long as possible towards the highway. I chose the latter, and had a nice easy jog across tundra. Before dropping to treeline, I stayed high on some balder patches of grass, wanting to drop into the forest as late as possible. I feared a bit of a slog in the last 3/4 mile or so, but it turned out to be a pleasant surprise of occasionaly game trails, logging road, well-spaced trees, and otherwise clean forest floor that was relatively free of detritus. That is, it was possible to zig-zag and jog down through the trees, headed toward the highway and parking lot. I wouldn't be able to retrace these steps on an ascent, but I'd definitely recommend considering it for a return route.

I was still early enough to chat with a guy in the parking lot about various hikes, and get some beers ready for the other guys. In short order, everyone was back. I need to return for some Coast-to-Coast action another time, but was happy to have enjoyed the views from Crystal and Mayflower.
Posted by mike_hinterberg at 8:29 PM 1 comment: 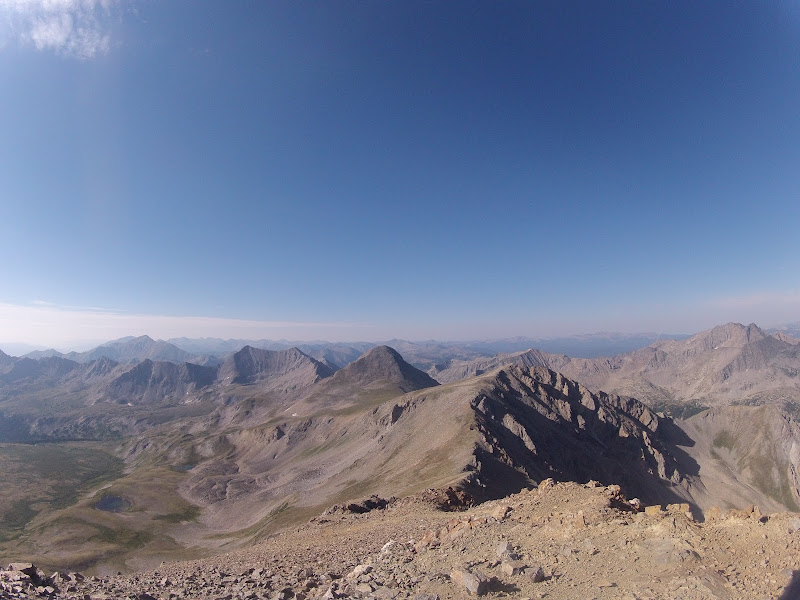 Nick has already had a writeup for a week, but in any case, wanted to make sure there was interesting beta on a great route on the Sawatch.

The Missouri-Belford-Oxford trio of Sawatch 14ers is a fairly common combination of 14ers, with the peaks being relatively close together and often either done in a one-day push or by backpackers who enjoy a few days in the gorgeous Missouri Gulch. It's still a lot of vertical in terms of 14er hiking, especially considering the re-climb of Belford that is necessary to avoid significant bushwhacking, but all 3 mountains have accessible Class 2 trails.

Furthermore, for those who haven't set sight on these peaks, Gerry Roach's famous book points out that which is also suggested by topo maps: accessibility of other centennial 13er peaks, Emerald and Iowa. Thus, a 5-mountain combo, which charts at about 16.5 miles, also makes for a nice day. I've been intrigued by this route for a few summers, ever since reading it on the toilet or waiting for an appointment or wherever I typically scan Roach's book for a quick 5-10 minute glance, but there are only so many good alpine weekends and opportunities in a year.

Since some of us were headed up to Leadville for the weekend, and the weather was looking quite favourable, I pitched the idea to the Nick's (Pedatella and Clark), despite a plan to run 21 miles at night in Leadville; which, at a social pace and after a one-way shuttle, I claimed would be "free" miles that were not at risk of being un-run. Luckily, they were game for this plan.

Then I worried about pace, but there was usual talk of taking it easy, feeling a little slow, having run a 50k the previous weekend (them) or an atypically high number of miles during the week (me), etc. Everyone was kinda telling the truth, but I still dogged behind a bit...although I was the only one with a camera and taking pictures!

Anyway, we got started from Missouri Gulch just before 7am, and hit Missouri, Iowa, and Emerald first. Missouri was the most interesting of the 14ers, with more of a fun ridge than the other 2, while Emerald was the sexiest looking, in my opinion. 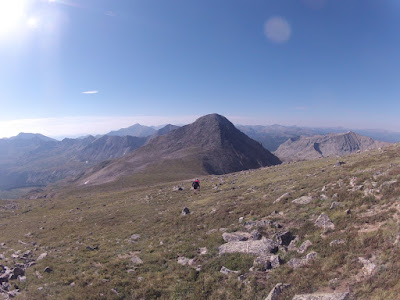 Next up was the only real route decision-making: heading over to Elkhead Pass. Roach's book basically suggested re-summiting Iowa. Pedatella and I discussed dropping all the way down the basin, by the lakes (I also thought about getting some water here), with the tradeoff of extra climb/descent being done at easier terrain at lower elevation. As it turned out, we just followed Clark on a direct, loose talus sidehilling slog. Other reports make note of this less-enjoyable route. It gets the job done -- and Clark was moving really well in that area -- but was certainly the least fun part of it. Coupled with running low on water later (nothing available up high), I might suggest considering the low route.

But we made it to Elkhead Pass, and soon were on our way up Belford. Without much haste, we bounced down the saddle and then up to Oxford, which had a couple of small false summits, but was otherwise a quick and straightforward scurry. Reversing our tracks, we were back up on Belford, still enjoying perfect weather. One more decision remained, but ended up unanimous, as we forewent the standard switchbacking descend down Belford in favour of "ascending" one more (named-but-uranked) peak, Peck's Peak, which is really a final bump on the North Ridge.
Besides the satisfaction of another peak, this gave us a fun extra mile ridge run, and we got to see some mountain goats we otherwise would have missed: 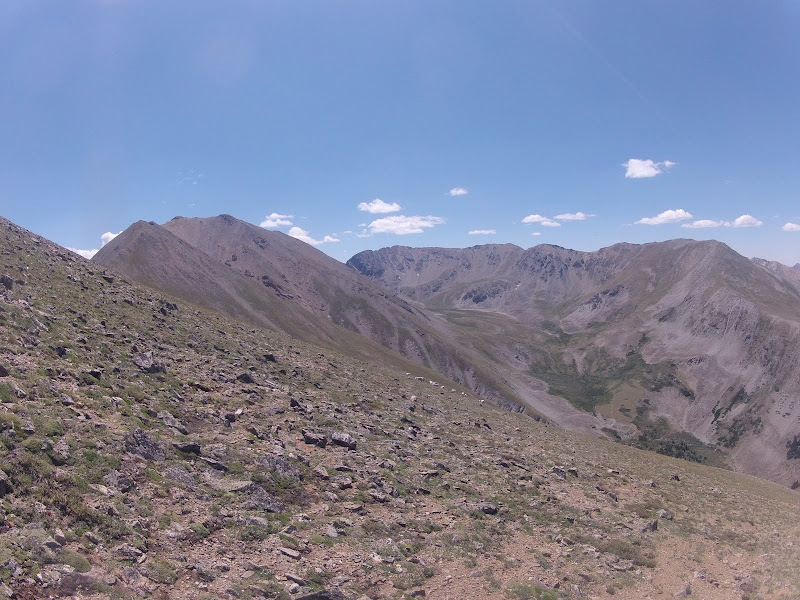 I poked around the farther end of the ridge a bit before descending straight down, whereas the other guys took off from the summit. Their terrain was more rocky tundra, whereas further down the ridge it was enough scree to ski a couple turns at a time (before being broken up by tufts of tundra). Other than filling up the shoes with rocks, it was more enjoyable of a descent than I anticipated.

Otherwise, my fixation was on water, as I ran out. I had only taken 2 bottles up (as had the others) as I had word that there was ample water in the gulch, but that was only in the lower parts where people were camped, so I had pushed it for the last hour, and I wanted to play with my Steripen anyway, which I had been carrying all day...and failed, again, with annoying blinking red lights. Ah well. So I wasted time doing that and finally met the other guys at the trailhead.

Anyway, it was a fun morning up high and certainly a classic route to consider to get your money's worth from the trailhead.
Posted by mike_hinterberg at 8:47 PM 3 comments: