When in Doubt, Go West 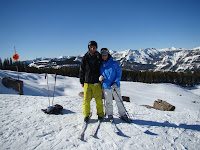 In California, they like to brag about being able to ski and surf in the same day. I never did that -- mostly because we decided to move to Colorado when I finally learned to ski. But how about skiing and headstands in the Sand Dunes on the same day?

J and I like to try out at least one new ski area each year, and we had our eye on Wolf Creek. Why not? It often gets the most snow in Colorado, coming in regular multi-foot dumps. But, it doesn't have a base village or the amenities of the mega-resorts. Even better.

Oh, the other problem is that it's a 7.5 hour drive. But, hey, we have all weekend, right? (Note: *This* is where I 'use my miles.' While I'll happily applaud anyone who simply doesn't drive much at all, I just want to make sure my driving is purposeful and not 'silly' -- that is, if I'm in the car, it's because I'm stoked about where I'm going; but it's not a necessity of day-to-day life). We had been there once before, in summer, also on a 'normal' 2-day weekend, in which we camped, visited Creede, Lake City, Mesa Verde National Park, the hot springs in Pagosa, and Durango; waited for me to ride a century in Durango; then took the long way home through Paonia.

Suffice it to say, the San Juans are awesome, so we want to pack as much in when we get out there.

This time, we made stayed at the "First Inn" in Pagosa, which also lets us buy discounted lift tickets. Wonderfully simple rooms and breakfast, a hot tub, and great management! "Lou," in fact, is a local and part-time prospector; or is he a part-time manager and full-time prospector? After filling up on waffles and cinammon buns on Saturday morning, we headed up to the hill, where we had a primo parking spot: 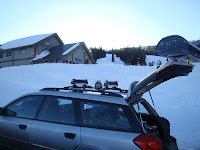 That's right, you could see the base lift from our car! The runs themselves weren't that long -- but neither were the lift lines. It was a perfect bluebird day -- bluebird weekend, in fact -- and we enjoyed our first turns of the season. Also, I had my BC skis in the car, and since it was nearby....why not? I took my BC skis on a resort for the first time ever. I never wanted to burn a full day on them, in case I was disappointed, but I had nothing to lose. As I got them out, a local guy said he had similar skis, and wanted to try his out, too, but was wondering if the waxless scales on the bottom would affect the ride too much. Only one way to find out!

Great decision, as I had a fun time on mild blues and greens, and fell a few times, as I practiced dropping a knee.

When the day was over, it was time for a soak in the hot springs. Last time, of course, it was summer, and we watched a lightning storm roll in. This time, we tried to avoid freezing our feet and slipping on ice as we headed into the first available pool, afraid to move as our hair froze on our heads. Eventually, I scoped out a path to the hottest pools, and we made our way over there. I threw in a couple dips in the river for good measure.

Next up was Pagosa Brewing company, which is actually up the hill outside of the downtown hot springs area. An outdoor fireplace gave a cozy feel to the entrance, and the restaurant itself was a bit small. It reminded me of Eske's in Taos, which was also small and cozy, but Pagosa beats Eske's with a bit better beer selection, and way better food: I would't have been able to say I had truly lived until that day in which I had a wild Pacific salmon gyro. Yum!

The next day was also perfectly clear and calm, and we decided to hit up the free ski/snowshoe trails at the base of the resort. Again, we were amazed by the ease of parking and friendliness -- this resort would be incredibly easy for skinning up in the morning from the base and earning your turns. Instead, we stuck to the bottom and enjoyed the sunshine. 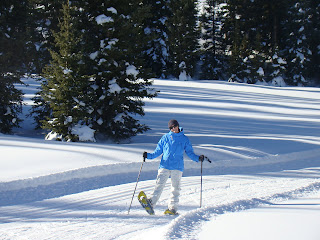 It was time for the long ride back. Another brewpub was on tap in Alamosa, so we saved our hunger...but it's closed on Sunday's in winter! Drat! Instead, we found a decent Mexican restaurant to fill our bellies, and we headed east, back home, the weekend over...

Or was it? We were in Ft. Garland, it was a nice day out, and Jess hadn't been to the Sand Dunes. We planned on a separate trip there, camping, etc. some other weekend, but it was only an extra 15-20 minutes each way out of our way...why not just spend on hour or so playing on the dunes, taking a nap in the sun? 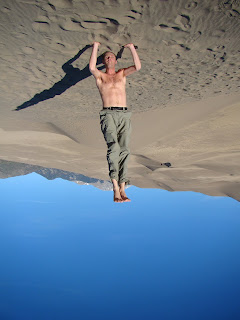 As hoped, Jess's brief taste of the sand dunes made her want to go back again...with a sled next time!
Posted by mike_hinterberg at 10:39 PM No comments: 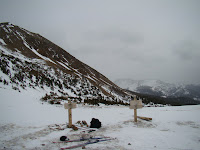 
I was thankful to be off of work on a Monday, in honor of MLK Jr. Day, which I celebrated by blasting U2's "Sunday, Bloody Sunday" on the radio while speeding through the snow-free and lightly-traffic'ed Poudre Canyon, on my way up to Cameron Pass.

Thunder Pass was the destination for the day, which is down the Upper Michigan Lakes trail for a bit, and past/above American Lakes. I've been intrigued by this trail for a few years, and was looking forward to trying something new, but hadn't gone yet for a few reasons:
1. Michigan Ditch starts out flat, kinda boring (though with *fantastic* scenery) in the beginning, and is usually mobbed by families and gapers on weekends.
2. Snowmobiles share much of the early route.
3. Avy danger can be high above the lakes, though my sources suggested enough low-angle options to mitigate the risk
4. You need a State Parks pass or entry fee...OK, it's a very fair $3, but if it's crowded, it would just be another reason to go somewhere else, albeit a weak one.

So, being a weekday, it seemed like a good chance to check out a new trail this year, and avoid the weekend crowds. Plus, the warmer temps and lack of new snow in the last week or so has finally allowed this year's unstable snowpack to settle a bit, so the region was generally "Moderate" danger.

This turned out to be a great decision.

Admittedly, I'm a sucker for mountain passes. I started with mt. passes on the road bike, but you can't beat the views from many of the backcountry passes, especially along the Divide. Some of my favourite parts of RMNP, so far, have been uncrowded and unspoiled "backdoor" entrances to the park: Mummy Pass, Storm Pass, and now Thunder Pass.

So I began the flat approach on Michigan Ditch. Jess and I had started this a few years back, but we had gone on a day of low visibility and actually had to break trail. Today, though, the snow was packed into a cross-country freeway, and I was able to enjoy the early views: 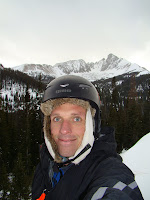 A bit after the cabins, I encountered a couple of Poudre Wilderness Nordic Ranger volunteers, who told me the snow was great and packed down, and just be sure not to get confused by the meandering snowmobile tracks. Good advice, as I made extra sure to get my bearings in several open areas with diverging paths (also, watch for the occasional orange blaze on the trees_.

After a couple of miles, I entered a large clearing with lots of tracks. This is a good spot to turn around for a family snowshoe trip, or even play around with some sking, as the trail now begins to get steeper as it tacks to the west. As mentioned, the snow was essentially groomed by snowmobiles. I had to herring-bone and zig-zag a few steeper stretches, but otherwise standard cross-country skis would have managed just fine.

After 2 or 2.5 hours, I reached another large clearing, and some amazing views. I am bad at mountain names from a distance, but was happy to recognize the east side of Static Peak, as well as the unmistakable Crags. I wondered how close I was to American Lakes...until it occurred to me that they were directly underneath me (and several feet of snow), which was the clearing. I made better time than I thought, and Thunder Pass was an obvious, gentle saddle below Lulu Mountain. There was no trail to speak of, but I enjoyed picking my own trail, as there was enough snow to ski to the top. I took a slope measurement for fun and practice, and I was able to stay on ~25 degree slopes. The snow was a bit hard and slabby, but seemed solid, and you could see occasional trees and rocks anchoring the snow, as well as flatter countours that prevent large, steep areas from holding a lot of energy. (That's about the extent of my reading and basic awareness class -- I don't have the skills to assess a pit on a 35-degree slope in order to get fresh tracks after a big dump, so for now I'll just avoid stuff like that altogether!)

Skiing up to the pass was straightforward, and I wasn't disappointed with a face-full of mountains upon mountains in RMNP (as well as blustery wind!): 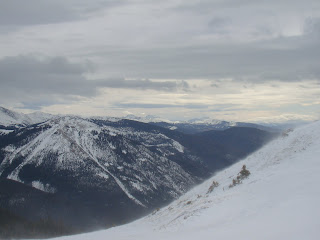 I sat down for a lunch break, and enjoyed the views outside RMNP, too: 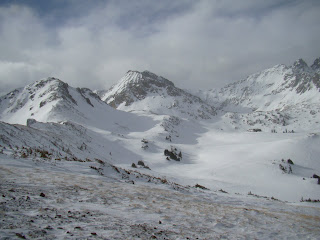 I knew the downhill would be quick, so I had plenty of time. I took a leisurely lunch, and fought the urge to climb Lulu, which would have been a straightforward hike with just a bit of scrambling at the top. But I hadn't planned it, and I hadn't planned for it (I would have brought extra boots, e.g.) so it'll have to wait.

I headed back down, and essentially made my first respectable BC turns -- ever -- without falling. Soon, I was back on the packed snowmobile trail, which was also a fun descent. If I hadn't stopped for more pictures, the entire 5-6 mile descent would have taken just an hour.

All told, the difference between RMNP and North Park is just an arbitrary line on the map. The world just on the other side of that line is quite beautiful, too!
Posted by mike_hinterberg at 9:42 PM No comments: