After the peak of Fall colour had passed, so did a quick cold front that brought a touch of snow, ice, and cold temperatures to Colorado.  This was enough of a reminder to get out and enjoy the remaining foliage display before it ended for the year.  Luckily, Sunday served up a sunny and crisp, windless day perfect for a leisurely hike.

So I went through my usual internal debates of balancing hike options, ruling out repeats and longer drives and such, before settling on a mellow, relatively close exploration of the Sugarloaf Mountain area above Boulder.  Despite being a very short hike of about 2 miles roundtrip, I thought there might be some golden aspen visible along the Switzerland Trail and the views to the west.  It would also put us on top of a conspicuous-looking conical nub on the Boulder skyline that's always intrigued me.

Sugarloaf Mountain, treeless and taunting near the right side of the Boulder skyline view
(photo from switzerlandtrail.blogspot.com)

And I was hoping for a bit more exploration, depending on the reality on the ground, of the surrounding area, with an eye toward Bald Mountain.

But, first things first: we drove up Boulder Canyon, and made the right turn onto Sugarloaf Rd a mile after the tunnel.  Then, after a mile up Sugarloaf Mtn. Rd, we parked at the Switzerland Trail junction.

The drive takes you nearly to the top of Sugarloaf, with only a quick 500 feet or so remaining.  And the leaves were clearly past their peak.

However, we were just at the right elevation and time to be in for a completely different treat: the tops of all the trees were completely frosted.  Between the colours of the leaves and underbrush, the clean blue sky, and the crystalline treetops, the scenery of this otherwise simple hike was otherworldly. 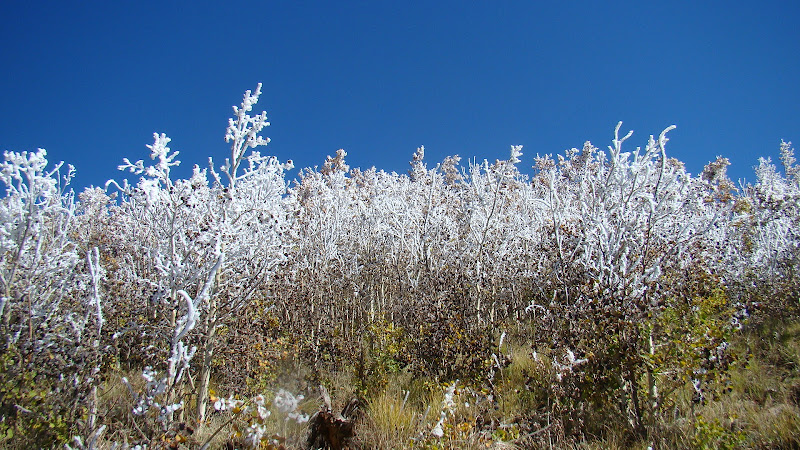 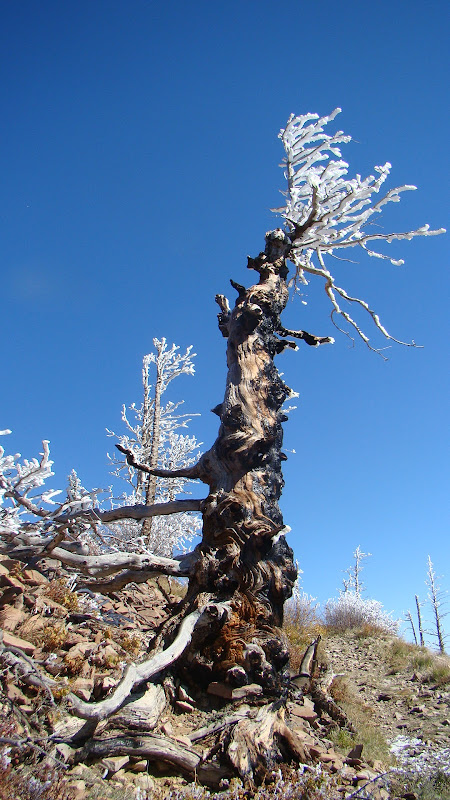 Even more precious then the Fall colours, we enjoyed a display that was as ephemeral as it was ethereal, melting and dropping quickly from the trees.  In a matter of hours, it would all be gone.

Otherwise, this is a simple hike, perfect for everyone from small children to the able, older set.  And, in fact, that's who we saw on the way: a man and his toddler daughter in a backpack; and a lively 75-year-old woman celebrating the morning with a mixture of about a dozen kids and grandkids.

As it was even with a good deal of picture-taking, we were on top by ourselves in only 25 minutes or so. 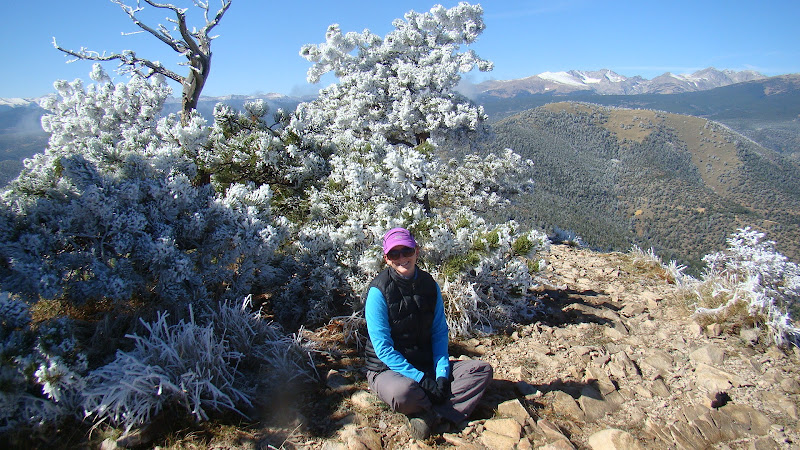 So what next?  I had my eye on Bald Mountain, shown behind/West of Jessica in the previous picture.  The scant information I had on it was an approach from the West (opposite) side.  That seemed like a bit of a stretch for an easy 3 hours, and I didn't want to get back in the car to drive for another short hike, so I was hoping it would look doable from the East, so that we could hike down Sugarloaf and head straight up Bald Mountain as well, which looked to be about 2 miles West of us.

Luckily, it looked like the trees were sparse enough on the south ridge to warrant a look-see.  With wifely buy-off into some (hopefully light) bushwhacking, we headed West.

A few quick notes: this one, at 9147' in the Burnt Mountain quadrangle, is different than the more popular, even easier, even closer-to-Boulder 7160' Bald Mountain.  Both of these are different than the other 2 Bald Mountains in Boulder County alone.  In total, Colorado has 94 peaks with "Bald" in the name; and, in fact, almost exactly a year ago, I enjoyed the triple bald loop near Red Feather, while J has previously joined me to hike "Old Baldy," which is Boulder County's highest bald-themed peak.
I'm not sayin' I have a bald fetish!
But I'm not sayin' I don't.


Anyway, from the parking area, we used combination of a short hiking trail, and the North side of the Switzerland Road a bit, before venturing off trail.  (Ideally, given the hunting season, we would have been wearing brighter clothing).  Soon enough, we lucked upon an actual FS trail, and shortly thereafter, a few gentlemen that looked like they had been camped there for a bit waved us 'Hello' and quieted the barking dog.  The trail continued up the hill, not always obviously visible, and past an old mine pit filled with some debris.  This was a lower ridge before the final summit ridge, so we descended just a bit before climbing again in earnest, again on the remants of an old trail and then through thinner tree cover.  Soon enough, we were on the summit of Bald Mountain, which had even more stellar views to the West, and a small grove of frosted aspen. 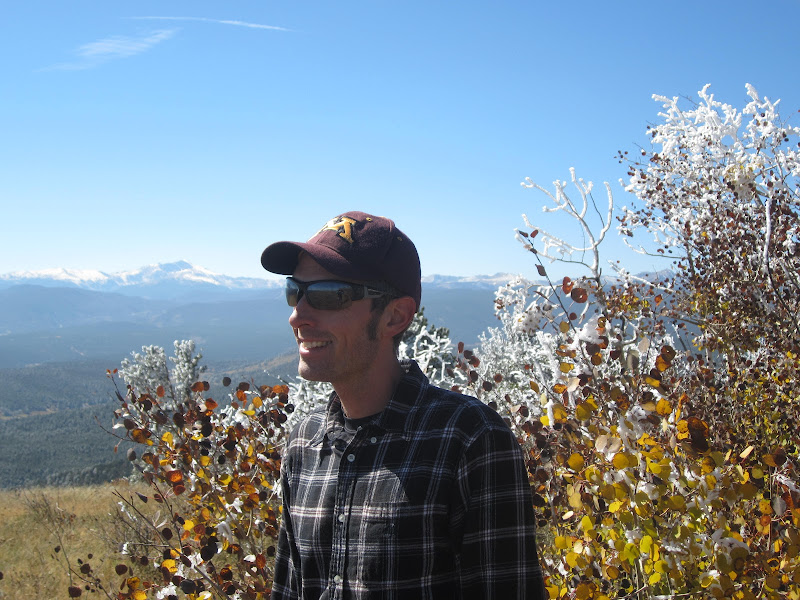 The best part of this double-summit hike was viewing both mountains from afar, both in terms of enjoying the view, and also easy dead-reckoning navigation.  Now, from Bald Mountain, Sugarloaf looked easy enough to leap right over... 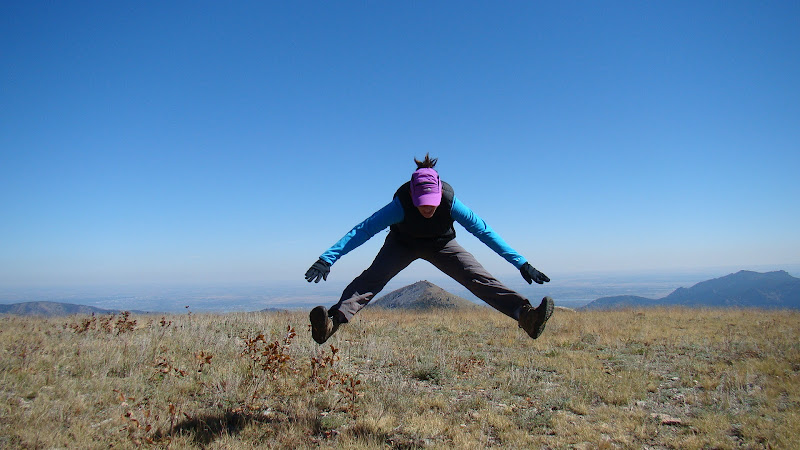 After enjoying the summit views to ourselves, and having found a great route up, we got lazy in
details and headed pretty much down the fall line.  It became apparent that we picked the thickest part of the tree cover to descend, so it took us about half an hour to get through it, probably the same or longer than it took to get up.  J was in good spirits but still said, "This is getting old," making me smile at the secret bushwhacking mantra. 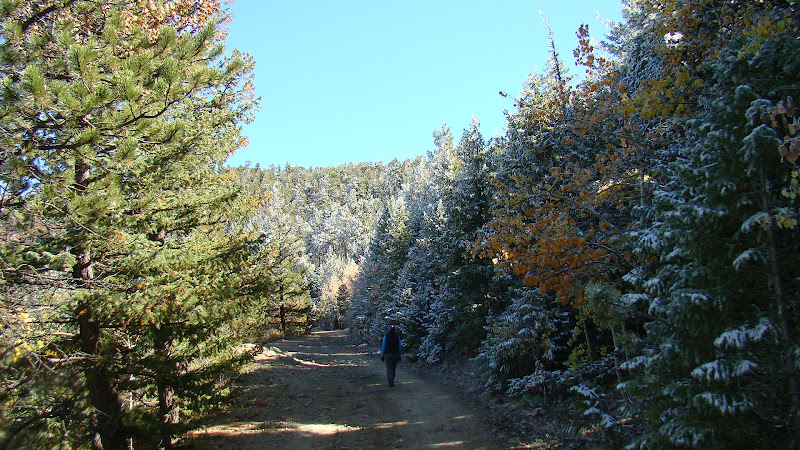 While these are generally overlooked lesser peaks, we ended up being very pleasantly surprised with just a little bit of fun exploration on a gorgeous day.

Posted by mike_hinterberg at 9:25 PM 3 comments: