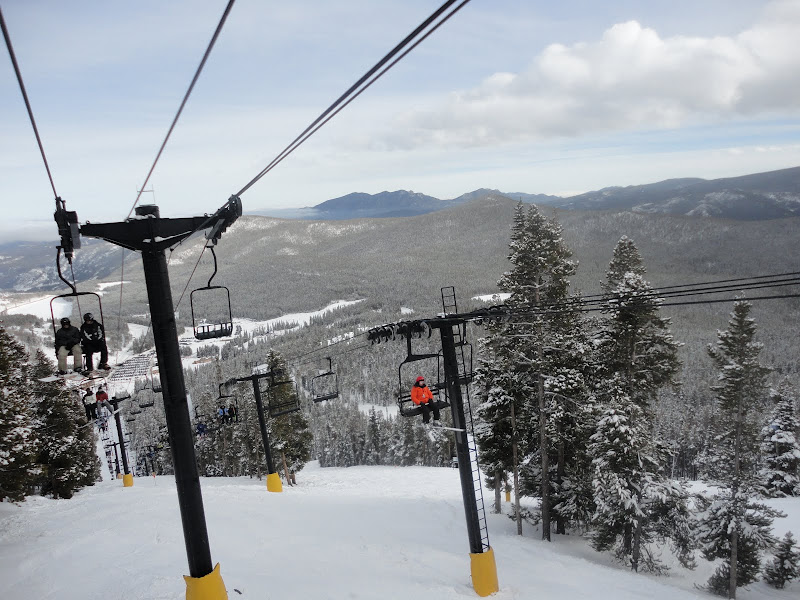 I bought my first ski season pass since moving to Colorado -- at $150 for students, the Eldora Pass seems like a bargain. It's not as big as the other resorts, but much closer, being about 40 minutes or so from Boulder, and has bus service from Boulder. I haven't bused there yet, but I've gotten half a dozen weekday ski sessions in so far.

The Bad:
* Runs are short compared to Summit County, etc.
* Lifts are slow
* In combination, it takes twice as long (~11 minutes) to get up the mountain as it does to get down (~4-5 minutes) on anything that doesn't have bumps on it

On the other hand,
The Good:
* Runs are still much better than midwest garbage heaps
* Parking is free and very close
* My drive down the canyon is dialed in, unlike the I-70 weekend parking lot
* Lift lines outside of holidays/weekends are almost non-existent
* Nordic area, included in the season pass, is pretty good

So what I've been doing is bringing both my alpine skis and waxless backcountry skis. I'll do a few hours of downhill, where I can literally ski onto a lift chair without losing momentum. I'll do 8-10 runs in 1.5-2 hours before switching to the BC skis.

On the BC skis, I've been able to play on the greens a little bit and work on my tele "technique." My lack of plastic boots and wider skis and, frankly, lack of technique, has held me back a bit, but it's still a fun transition.

Then I'll head to the Nordic area for a few hours. Outside of the first 1 mile of trails or so, it's never been too busy, and many folks will nod and say "Hello." Good folks out there.

I've been on every open trail on the mountain so far, so here are my thoughts:
Favourite Downhill:
* Upper Ambush is bumpy but doesn't get much traffic, and enough sun that the snow has stayed soft.
* Corona is a fun black cruiser.
* Jolly Jug Glades: Didn't discover it until recently since it's on Challenger, but the trees are nicely spaced.

I hiked over to Westridge once, didn't find the cleared run so ended up in steep glades with bad visibility, some soft snow but also rocks poking out. Heard some guys, found them drinking Bud Light and they guided me back on a traverse to the lift. I was in over my head on that one.

Favourite Nordic:
* Antelope Creek Loop: This just opened recently, great views and a relatively screaming downhill return (on XC skis) from the creek. I also poked around on the mountain above the creek and found some awesome powder, but had no idea where I was. Eventually found myself on Rollins Pass Road, followed that around for a bit and then turned around. Then saw "Private Property" signs on the way back, whoops, need to scout out on a map more.
* Zarlego Loop: Even if you didn't do Antelope, Zarlego and Jenny Creek is still great. Not many people go that way for some reason and stick really close to the base.
* Sawmill to Woodcutter: Fun swooping curves
* Mountain hut trail: Narrow and consistent hilly grade. Great views on top. Wasn't sure about going downhill on packed snow, but had to try it once -- just barely enough room to snowplow. Shared with snowshoers so careful on the downhill. Luckily, only encountered one skier, who took off her skis and walked because of the narrowness/steepness.

Anyway, it's a great alternative, and a great place for nordic skiing. The Jenny Creek trail, in fact, is free, so it's still worth checking out if you don't have or want a pass.
Posted by mike_hinterberg at 7:14 PM