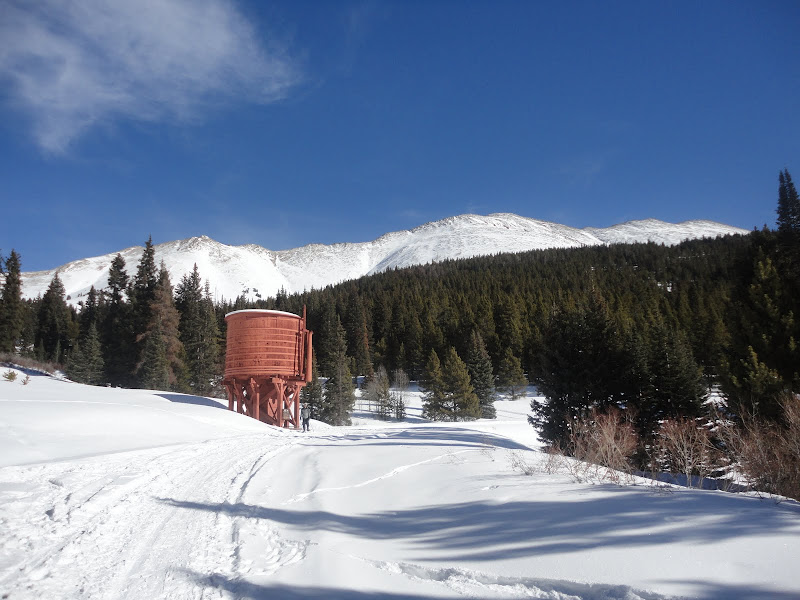 Stayed up in Summit County with J, Neil, and DJ for Xmas weekend. After a nice sunny day of downhill at Copper (if you're going to ski on a weekend, I really like Xmas and Super Bowl Sunday!), we did a leisurely snowshoe/ski loop up above Breckenridge.

For one thing, Summit County/Dillon Ranger District has a fabulous selection of free trail beta online. Looking for something moderate in the ~3 hour ranger, Baker's Tank seemed to fit the bill.

Baker's Tank is a restoration of a 125+ year-old water tank used to reply steam engines traveling along a railroad line over "Breckenridge Pass", later and currently named "Boreas Pass", between Como and Breckenridge, which was originally "Breckinridge" before being re-spelled during the Civil War. This railway was abandoned in 1937, and repurposed as a road. That is, Boreas Pass Road used to be a railway over Boreas Pass, which used to be Breckenridge Pass, which used to be spelled Breckinridge (the town, at least)...and did anybody ask the Utes about all this? I digress.

Anyway, Boreas Pass road itself is a scenic route worthy of a summer mountain/cross-bike ride, or winter excursion. Along with some parallel single-track, there are some great loop options as well. The trailhead is 3.5 miles east up Boreas Pass Rd (CR-10), from the (currently) southernmost stoplight in the town of Breckenridge. I've driven past this road dozens of times, but didn't register it, as we ended up passing it by a few miles. The road is switchbacked but graded well enough to be passable by passenger cars if it hasn't snowed very recently, and there was ample parking a the top.

We took the Baker's tank trail (Trail #40) as it steadily climbed through the trees, eventually winding through hardwoods and then descending slightly to the tank. This really opened up the views towards Hoosier Pass, Quandary, and Breckenridge Ski Area. We then descended along the sunny, gradual Boreas Pass Rd. itself. 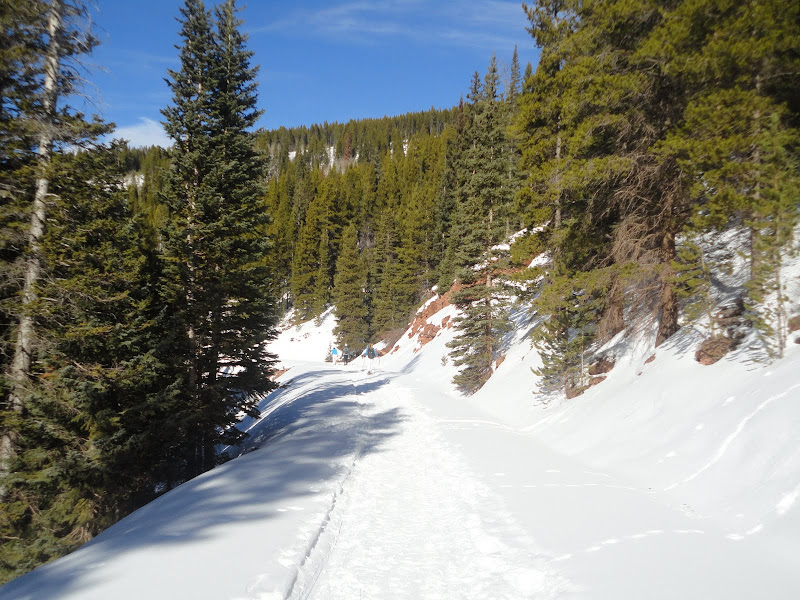 This area has some great views and options, either making a loop, sticking to the trees on a windy day, or a scenic out-and-back on the road itself. Supposedly, the road allows snowmobile traffic, but we encountered none -- just mostly-friendly dogs (including an owner-less but also cask-less Burnese mountain dog roaming the slopes), though this includes a fair number of dog messes in close proximity to the trailhead, as it's also a popular locals spot. In general, though, this area would also be a great option for a trail run with light traction (Yak trax or microspikes) or even a winter mountain bike ride, depending on your tastes.

And, it's warmer and less windy than Hoosier Pass!
Posted by mike_hinterberg at 6:47 PM