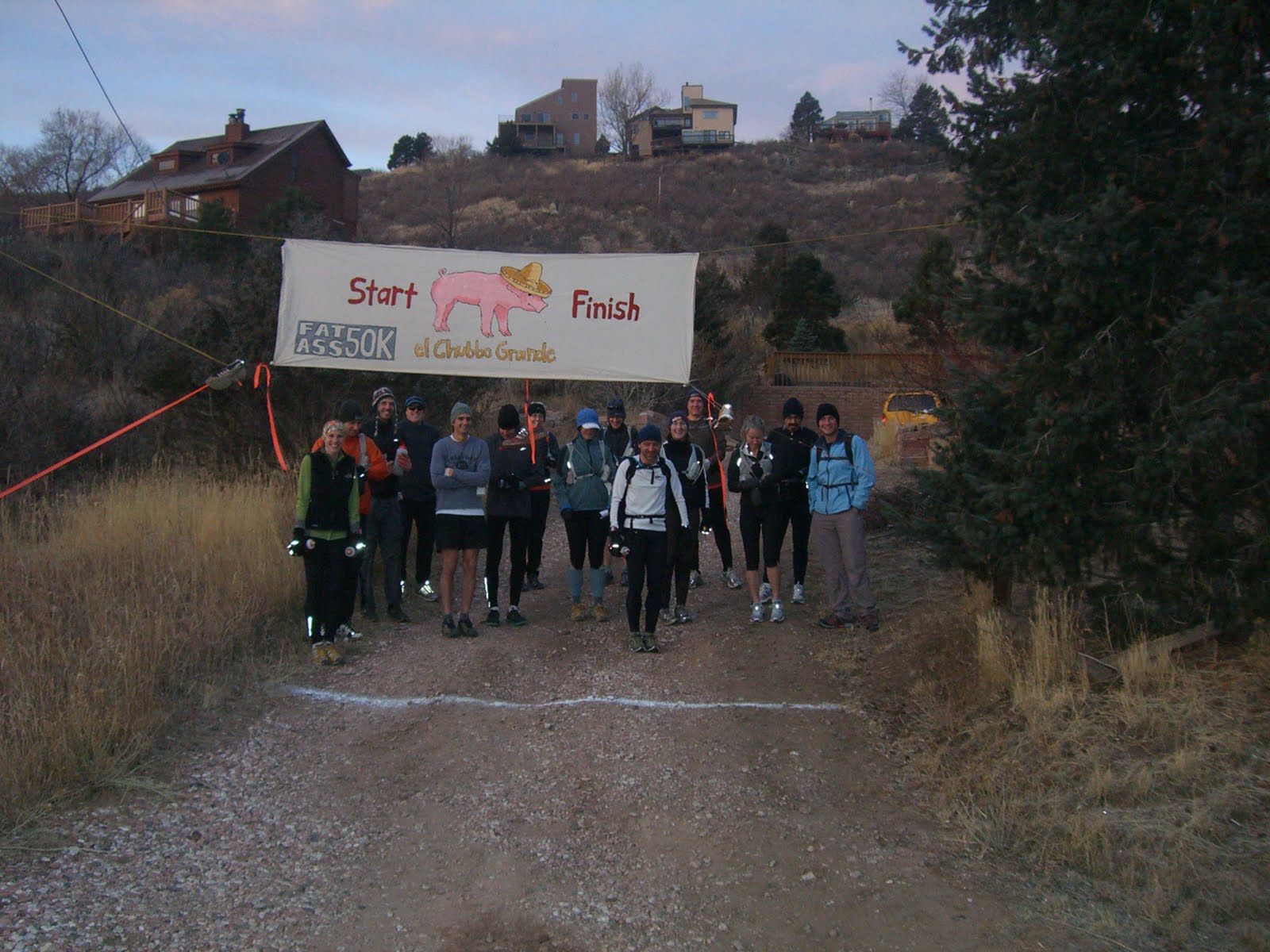 
Awesome day on the trails in Ft. Collins, courtesy of Nick Clark.

Nick had been talking all year about creating a Fort Collins version of a Fat Ass self-supported winter run. He came through with flying colours (and flying pigs) with the inaugural "El Chubbo Grande", in which he sketched out a 50k route, along with a marathon and some lesser distance. Unfortunately, for all this work, Nick was unable to run due to circumstances out of his control, but he remained the consummate host and put on quite a show of Fort Collins best trails.

The ran began with staggered starts from Chez Clark in the morning. More than 50 folks showed up for running and/or socializing afterward. In his best Barkley impression, Nick drew an unimaginative course which essentially added every hill in Horsetooth Mountain Park and Lory State Park, before looping back and repeating the same in a slightly different conflagaration. Seriously, though, the nearly 8000 feet of gain included prominent scrambling summits of Horsetooth and Arthur's Rock, which are both postcard-worthy perches which many folks are satisfied to obtain even once in a year or in a lifetime.

I was happy to join Alex for a fabulous 7-hour jaunt. We had a chance to catch up since Lean Horse, and he was prepared enough to have trail knowledge as well as bring a camera: 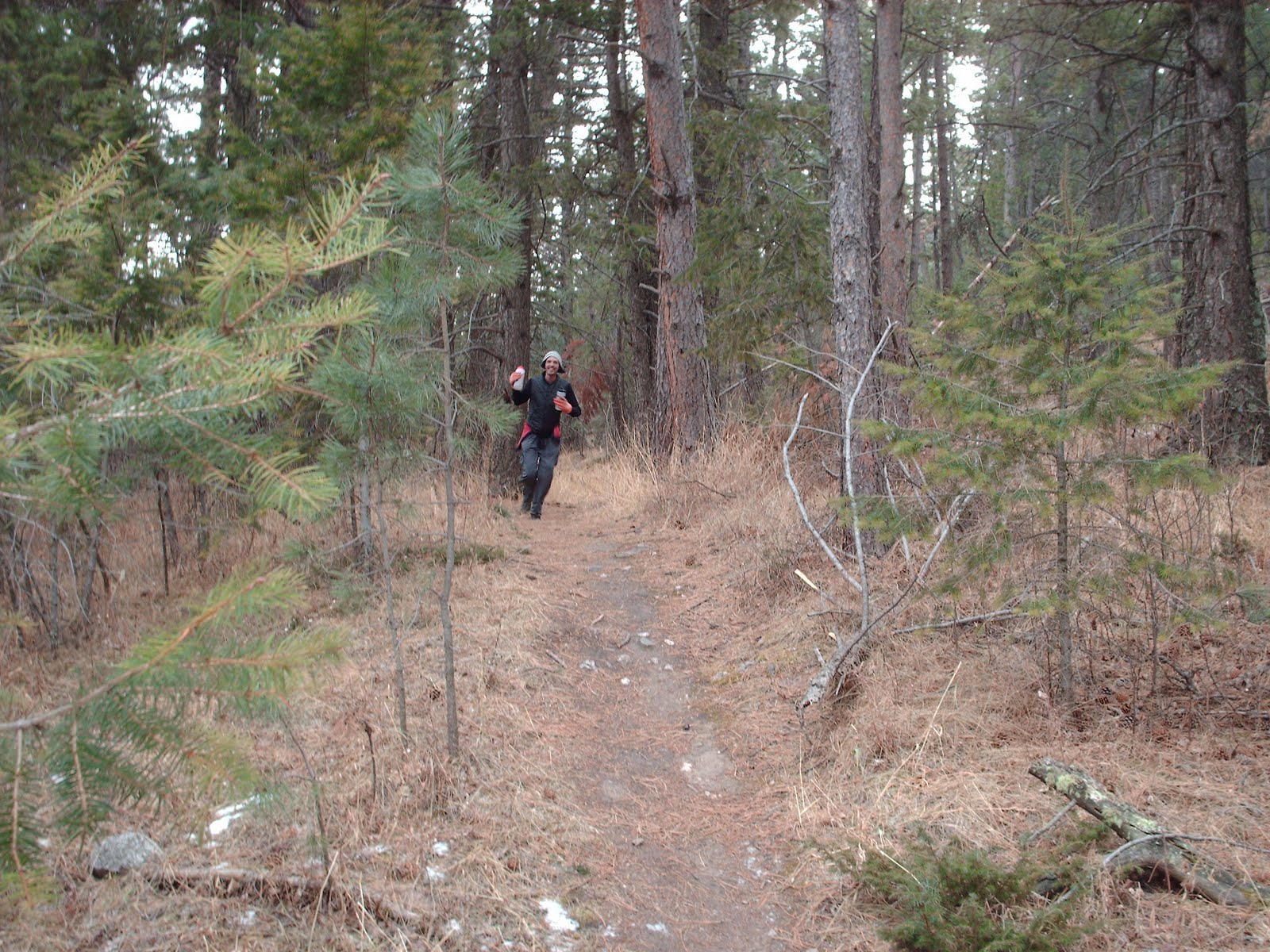 Photo courtesy of Alex May


By running with Alex, the time flew by incredibly quickly. I've run 20+ miles exactly twice since August, so I didn't know how this was going to feel, mentally and physically. Happily, the ultra (-psychotic) mental training seems to last long enough such that the time went by in manageable chunks, one hour at a time. I also enjoyed catching up (metaphorically, not literally) with Rob and Pete, both who put up some fantastic times on their hometown course to set themselves up for a fantastic 2011 (including Pete's very impressive FKT and victory), and enjoyed seeing JT at the aid station. I also met a few new runners on the course, namely Kiwi Rob and Towers QotM Jenn Malberg, both who were full of running talent as well as friendliness, and enjoyed talking with other runners afterward at the party.

I had a blast on this course, and savored every minute. Alex kept me on track without having to look at the map or getting lost, but the course markings (courtesy of Nick, Pete, and Rob) were also fantastic -- better than paid races! I conservatively chose to hit the Lory visitor center for some extra water and a bathroom break, but the aid station, courtesy of Chris, was also a welcome addition with a surprising smorgasbord of calories.

This run, at the end of 2010, had some important personal psychological meaning as well. I had a brutal but expected return to school along with a move to Denver, which severely cut down on running miles as well as accessibility to trails. In fitting symmetry, I ended a 100-mile run the day before school, and enjoyed a 32-mile run the day after, on basically all of the classic showcase trails above Fort Collins (Bobcat and Coyote Ridge notwithstanding, my other local favorites). This was something I was looking forward to for weeks and was the perfect opportunity to clear my head and start the new year with fresh optimism. In addition, I had set a goal of more social running in 2010, which I wouldn't have been able to do without the strong and growing FCTR group. Finally, this run was a test for a lingering abdominal/groin injury, which has been a big unknown since October. While I'll need one more track run to claim victory, I was ecstatic to survive 7+ hours of running without any hint of recurring pain.

So, many thanks to Nick and all of the FCTR for a great event. Let's hope it's the beginning of a new tradition!
Posted by mike_hinterberg at 5:52 PM