Each year, J and I try to head to New Mexico for a quick getaway to another world.
Cities and towns like Santa Fe and Taos have a different vibe and history that is unmatched in North America, and the surrounding landscape of the "Land of Enchantment" evokes imagination and wonder.

Plus, they've got Trader Joe's.

So with a few days for Thanksgiving, and in celebration of J's 30th birthday, we headed down to Santa Fe. As usual, this will end up being mini-restaurant reviews, since a big point of going there is to eat.

We stayed at Pueblo Bonito inn and enjoyed the rooms and hospitality. Rates are very reasonable and it's got cozy rooms and a great location. Breakfast is a simple buffet.

Most importantly, the rooms have kiva fireplaces. 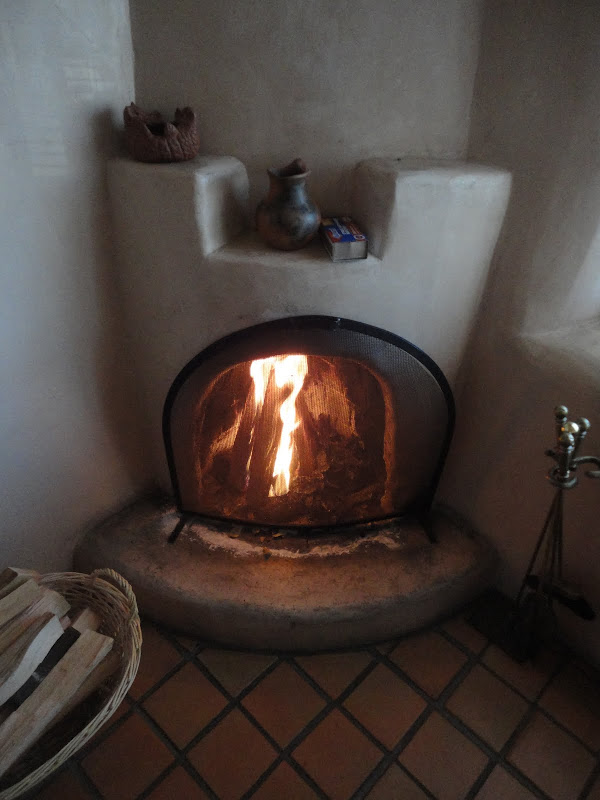 I'm almost afraid to go to New Mexico in the summer, because I enjoy it so much in the fall and winter. The elevation and dryness of the air means that the temperature drops quickly and noticeably, but a stroll around town ensures the consistent aroma of burning pinon. And, not being natives, we're also not bound by law to wear layers of expensive scarves and boots that Santa Feans need to avoid hypothermia, apparently, when chile serves the purpose even better. Also, the late Fall means expanses of gold, green, and brown, along with snow, which looks best in the flat light and shadow of a low sun.

La Choza
We arrived just in time Wednesday night to make a quick run to TJ's and then tried La Choza for dinner. La Choza was recommended since it's owned by The Shed, which has been one of our favourites, yet was supposed to have lower prices while still having great food. The top Google search, in fact, shows very good *lunch* prices -- but the dinner prices still start at ~$13-$15 and chips and salsa are not included (d'oh), although sopapillas are. Even still (and we did order chips and salsa), I finished my food quickly and could have eaten a bit more (not healthily, mind you, just sayin'.) Santa Fe Nut Brown though (just like at The Shed), always good stuff.

Thursday proper, with most things closed, we pretty much slept in and had breakfast at the inn, being pleasantly surprised with a light dusting of snow and blazing sunshine. The rumor was that the big cold front was coming through New Mexico and Colorado on Thursday, butit seemed fairly nice in the morning. We pretty much chilled out and I kept a promise to J not to make us run around and do a bunch of stuff. In the afternoon, though, she took a nap and I snuck out for a run up Picacho Peak. 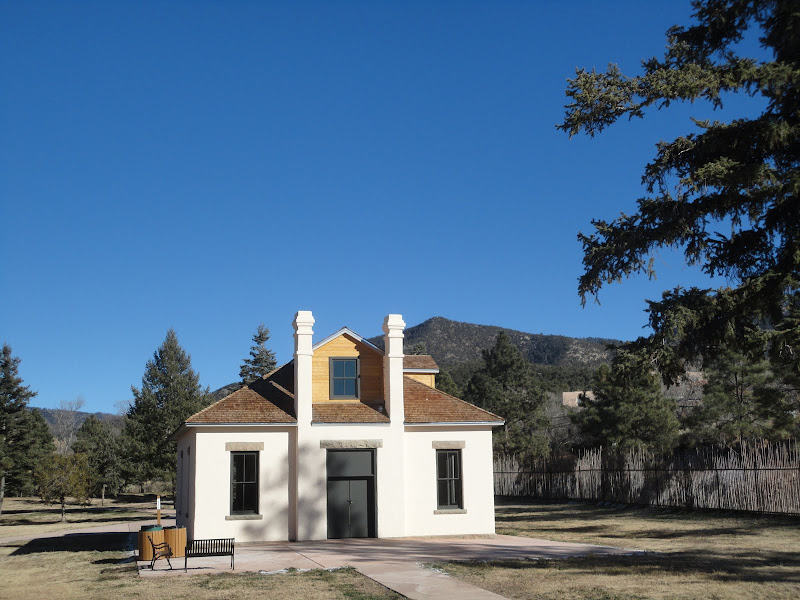 Picacho Peak is a little knobby point in the foothills above town, part of what looks to be a great trail system known as the Dale Ball trails, known for good mt. biking on one side and hiking on the other. I headed generally through town up Canyon road, hoping that the knobby thing ahead of me was the peak since it looked sufficiently interesting. (Not much further past Picacho is the higher but more bulbous Atalaya Peak).

I'll admit, around this time I felt kind of in a bit of a funk, with many things either going on or not going on in life. School has been busy but I can't say different than expected; I've been limited in running somewhat both with time and a persistent abdominal/groin pain (though it's not as bad as before, and doesn't hold me back on trail running or skiing -- it's just there). Enough of that whining though, you didn't sign up to read about that: I really wanted to mention because, ultimately, I felt significantly better after this run (why do things like that continue to be surprising?) as well as discussions with J about how, yeah, we pretty much have it really good (usually I'm the one doing that reminding) and everything in our control can and will get better. I guess that has something to do with Thanksgiving.

So yes, it didn't feel as cold as advertised -- and why should one's feeling about the weather be based on what's advertised? -- so I headed out in shorts and a long sleave shirt. I caught the unmistakable scent of masa being cooked, in addition to wood smoke, and started thinking about fossil fuels versus wood, thinking about how wood is so much more fresh and humane and direct and intimate, like eating a fruit, versus some artificial and unknown heavily-processed concoction. I probably then started thinking about food after that.

The TH toward Picacho was on the right (South) side of the road, and the trail system is nicely marked at each trail intersection. It's only a couple of miles to Picacho, and starts out somewhat steep and switchbacked, and with the snow and shadow there is potential for ice, but in this case it ended up being the perfectly runnable cottony snow that feels exactly what a children imagine when drawing clouds or heaven, then most of us forget again until we tread on fresh snow.

I encountered just a few parties on the trail, with a few saying things like, "Nice work" or "That's studly" while kindly yielding, which is nice but was really a very short, routine run on what ended up being a very pleasant, windless afternoon. "Black Friday?" Give me a trail day on Thanksgiving or Christmas, and I promise you'll see the best of humanity. Go shopping the next day, and you're purposely choosing to see the worst!

At the top were great views in every direction. Here, I met a group: Jeff, Lucas, Gemini (my first Gemini!) and ? (unintroduced wife). All were in great spirits, and everyone was from out of town (California), visiting Jeff, the oldest of the group, who lived in Santa Fe (near the bottom of the trail) and gave a brief description of the surrounding environs. Atalaya was very close but required a descent to a saddle in the trees, and I thought I'd be pushing my time allowance, so I spent some time up top chatting and then headed down, figuring I'd tack on something at the end if I had any extratime. Jeff had headed down first out of paranoia of "holding up the group" -- I encountered him shortly but found him running - he made me laugh because he was so self-deprecating but obviously gets out and hikes and runs when he can. I hung behind him and chatted a bit, then decided to head back down. I did have some extra time so I took a longer loop around between marker 30 and 31, when I encountered Jeff again, almost at the bottom, sweaty and *way* ahead of the rest of the group.

"Did you happen to see a blue glove?"
Crap, I did -- sometime after passing him near the top. I didn't know if somebody else going up or down would see it, so I had left it. Since I knew where it was, I headed right back up again, thinking I'd probably see the rest of the group and find out if they had picked it up. Turns out, they bushwhacked in a different direction and were probably 15 minutes back, and the place where I had seen the glove was actually pretty close to the top, so I ended up going up about twice, though it's more fun when there's kind of a reason or a "quest." The guys said they'd jog down now that they were back on the trail, so we all jogged together and chatted.

Anyway, I got back in around 2:15 and felt significantly better.

Thanksgiving Meal
First, we had sushi and $3-buck Chuck in our room, then took a stroll around town.

We were waiting for 7pm, when we would join friends John and Kelly from Fort Collins for dinner. Jessica works with Kelly, and I've met them briefly twice: the first time, coincidentally, we saw them while waiting for a table at Snooze in Ft. Collins. They had an hour wait, but instead we shared a table and I enjoyed meeting them. We never had a chance to get together before moving, but they were at J's birthday party the previous week, and talked about how they were headed to Santa Fe for Thanksgiving! So we decided to meet up for dinner at Los Mayas.

Los Mayas Restaurant
We decided against typical (and more expensive) Thanksgiving faire for New Mexican instead. We had a cozy table at Los Mayas next to a fireplace, and enjoyed delicious chips and salsa with our meal. They only had bottled Mexican and American beers though, and prices seem to have gone up a bit. The food looked beautiful on big square white plates, but I was dismayed to have large, big white gaps between my food, mostly because they were (silently) out of both the rice and pozole that are supposed to accompany it, meaning that I stood a good chance of still being hungry. Another strike was that my "green chile and cheese tamale" ended up being an "(implied pork and) green chile and cheese tamale." Still, what I had was delicious, and I'm only being picky because there's so much emphasis on having a delicious meal that you can only really get in New Mexico, but this isn't really a problem in the grand scheme of things. I'm just telling you, The Shed, Pasqual's, and Tia Sophia's (breakfast) are still at the top.

We headed over to Del Charro Saloon for some drinks. 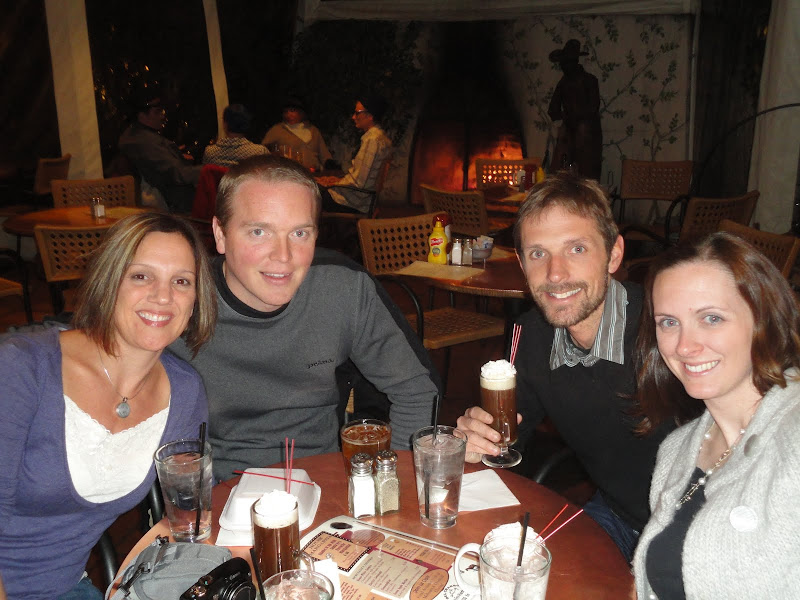 Now that's a fun place, as we sat in a covered patio with a fireplace and heat lamps, enjoying Santa Fe Brewing Co. beers, cocktails, and great hot mixed drinks. I really enjoyed getting to know John and Kelly more, as we all seemed to have quite a bit in common.

Tia Sophia's
By Friday, the tourist throngs were back out and things lost a bit of their magic. The Shed had a 1.5hr wait, so we had lunch at Tia Sophia's (only had breakfast there before). They're quick, attentive, and have a solid menu -- nothing stands out as great for lunch (prefer the breakfast menu) but everything is predictably very good.

We headed back Friday, so it was a quick trip, but fun as always. Lots to be thankful for!
Posted by mike_hinterberg at 6:13 PM