I hadn't run at all for a week since my lower abdomen started feeling sore, and with the great weather, I was dying to get out to some trails. It would've been a perfect weekend to spend the whole time in the mountains, but I only had a few hours. Thursday's test run went alright, so I decided to check out Evergreen Mountain. I know JP gets out there frequently -- turns out he was there earlier in the day.

It takes about 50 minutes for me to drive there (ugh), but I really enjoy Parmalee Gulch up through Evergreen. I decided to park and start from the lake and take the Dedisse trail connection before heading up Mt. Evergreen itself.

I felt sluggish chugging up the hill, but enjoyed it immediately after crossing a creek and heading into the trees. Hung a left at Three Sisters and then started heading up Evergreen Mountain. Not feeling too fast, and not even sure how many miles this route is, but sped up a little bit when I didn't know where the summit was and my watch was getting close to an hour. On the way up, saw no runners, but hikers that moved out of the way, and a fair share of mt. bikers. I generally wave the mt. bikers down to 'keep going' while I stay right on the edge of the trail so that neither of us have to give up momentum or stoke.

Had a few minutes up top to myself: 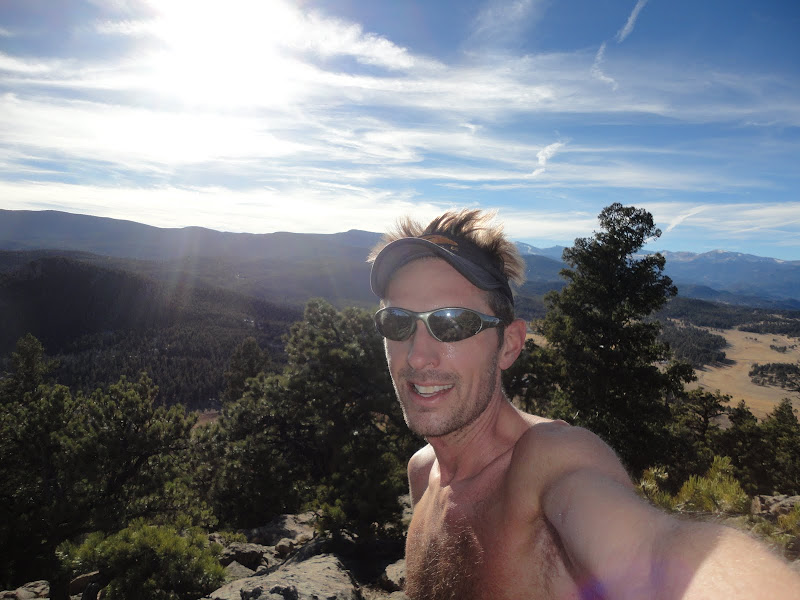 which reminds me, two people commented on how awesome it is to be shirtless in November (yes!)...met Bryan Anderson and his son Evan up there. Bryan asked if I was a "Leadville or Pikes guy"...I demurred about not having run those (not sure how much people know about other races), but then figured out he was totally into the scene and had done various flavors of Leadville distances and modes (bike and run), and also volunteered other years (which just reminded me how much I need to volunteer for something). I commented on how cool it was that his son was up there riding already and how lucky he was, since we both hadn't started this stuff until our 20's or later, in his case.

Started stiffening up as I headed down, mostly from lack of running as well as extra biking, but passed a couple timid mt. bikers going downhill(!), even though it's fairly non-technical, so I made it my goal to stay ahead of them the rest of the downhill (I could see if they were getting anywhere close on the switchbacks). I made it down to the trail intersection at a bench, then pulled up for a map check as they caught up and passed. I intended on taking a different route back and ended up with a wrong out-and-back repeat for an extra mile, but then got back on track. Saw an interesting rock outcropping on the Three Sisters trail so quickly scrambled up that for a view.

I was thinking about how my abdomen was feeling better, but then I sneezed and it quickly reminded me that it's not quite there. It doesn't really hold me up running, maybe I feel it a little bit downhill if at all, but it's not perfect. I'll still avoid speedwork and core work for a bit hoping that it gets 100% eventually.

Otherwise, a great afternoon. I really like it up there: 12 bikeable miles from Echo mountain, 28 from Mt. Evans... On the way back, I passed the RTD sign and pulled over to check the schedule: 40 minutes to downtown Denver. I tried convincing J when I got home that we could realistically live there. Except for the housing price thing, d'oh.

Another great trail in Evergreen. I like the Dedisse connection as well, and I can see why Alderfor-3 Sisters is popular for mt. biking, as the trail is fairly buff and rideable all around.
Posted by mike_hinterberg at 11:33 PM