My alma mater, the Wisconsin Badgers, beat the Indiana Hoosiers
83-20.

I decided to dust off the backcountry skis and check out Hoosier Pass for the first time. Generally, I wanted to check out the Bemrose Ski Circus trails. In my mind, I pictured clowns, elephants, and whimsical music -- always whimsical music! But in this context, "circus" is the European term for a junction of a bunch of a bunch of different roads (e.g. London's Picadilly Circus) or an interconnected ski area (e.g. Austria's Saalbach Hinterglemm Leogang Ski Circus, which seems to have everything including a dischotheken)

I took 285 from Denver and got there from East Denver in exactly 2 hours. Not as close as I'd like, but nice to avoid I-70. Not much snow all the way through Fairplay/South Park, but finally started picking up as I climbed out of Alma. Sure enough, a winter wonderland as promised at the pass itself.

I parked at the parking lot on the West side, and saw a dude, Clint, who just came up the pass. He told me "there's no love" out there, as it took him awhile to hitch a ride up to his car which had been left overnight, but told me the snow was good and talked about various routes off the ridge on the West. By the afternoon, saw a few cars with great bumper stickers, more friendly folk, and friendly dogs. Definitely a scene there that I dig, way better than the resorts.

Plenty of good options and an easy, accessible ridge from the West side, which I didn't know anything about. Later I learned that snowmobiles (ugh) are allowed on that side, but hopefully there are enough options to keep everyone satisfied. But I stuck to my plan of the Bemrose Ski Circus,and headed out clockwise around the main loop. It's generally flat with only occasional dips, a great spot for x-country or snowshoeing. The trail was already packed out to Bemrose Creek, where it ended abruptly without an obvious trail. The map shows a trail following the creek itself, but being early in the year, plenty of willows were still poking out.

So, too, was Hoosier Ridge to the East. 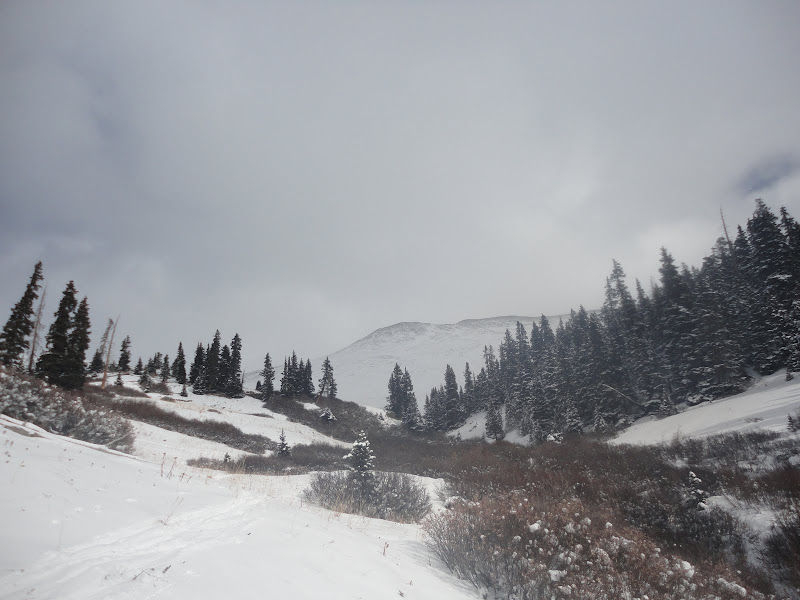 This early in the year, avalanche danger is generally high. I am certainly no expert (never will get there, but working on it), but the maxim is, "enough to ride = enough to slide." You could argue that there really wasn't even enough snow to ride, as plenty of vegetation was poking through. I decided to follow a mellow ridge to the North of Bemrose Creek, as far as I felt comfortable. Much of it was wind-swept with just a few inches. But, large sections were rock-free, so it was possible to keep the skis on.

I zig-zagged my way up, but took longer than I thought. A dark cloud had been coming in from the North, which was kind of neat when it was partially below me: 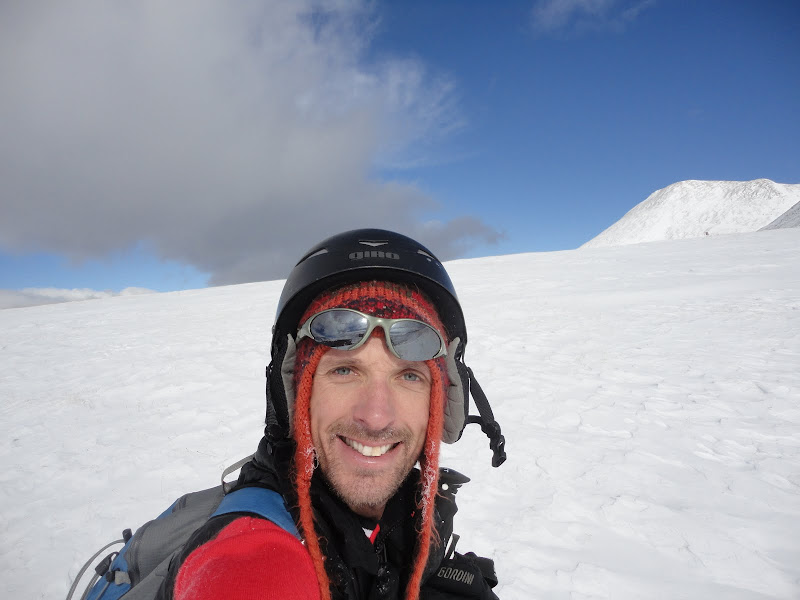 I was only a couple hundred feet from the summit, right below the steeper section of bare rock, and the clouds were moving in fast. I no longer could see the summit with the clouds and wind picking up the snow, and decided on a new rule: Don't climb solo on something you can't see

Plus, the view below was becoming obscured, and I needed to be able to see a line to safely avoid rocks, or I would have had to descend very slowly. 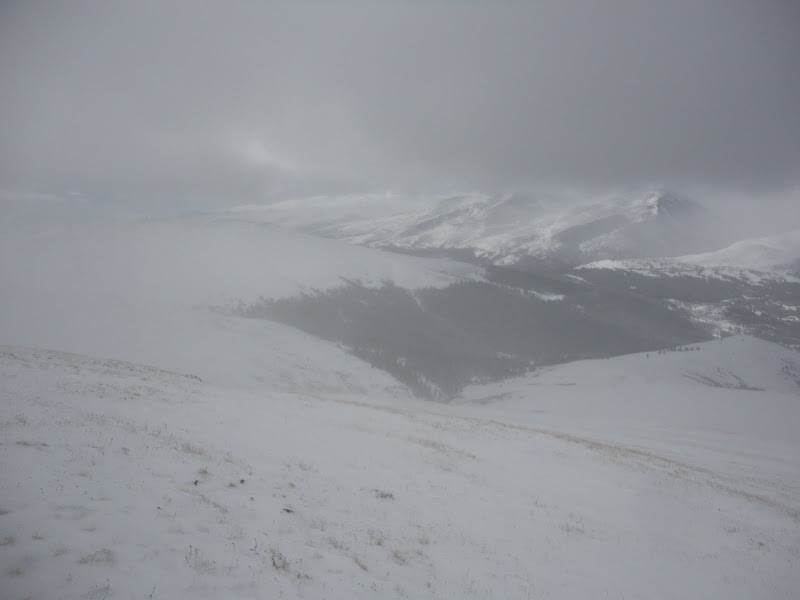 So I turned around, a little disappointed at not getting on the peak in front of me.
But what about the descent? Funny, I was mostly looking forward to the ascent, as I am a sketchy descender on these narrow, short backcountry skis and soft boots. I've had a little success at the resorts, but generally am happy enough on rolling trails in the backcountry. I had ascended today only because of the mellow angle, and having enough width to cut back and forth across the fall line to control speed. I want to get better at this.

I started a little shaky, but then it happened: I linked together a couple of halfway decent, useful telemark turns. For all that work, I though, yes, this is a pretty cool way to go down a mountain.

So no summit for the day, which wasn't entirely planned anyway, but a fun descent and a great workout, more familiarity with the skis and a new area, and no I-70. Not bad for November.

I'll certainly be back to explore more. Across the street? Northstar Mtn. and Quandary. 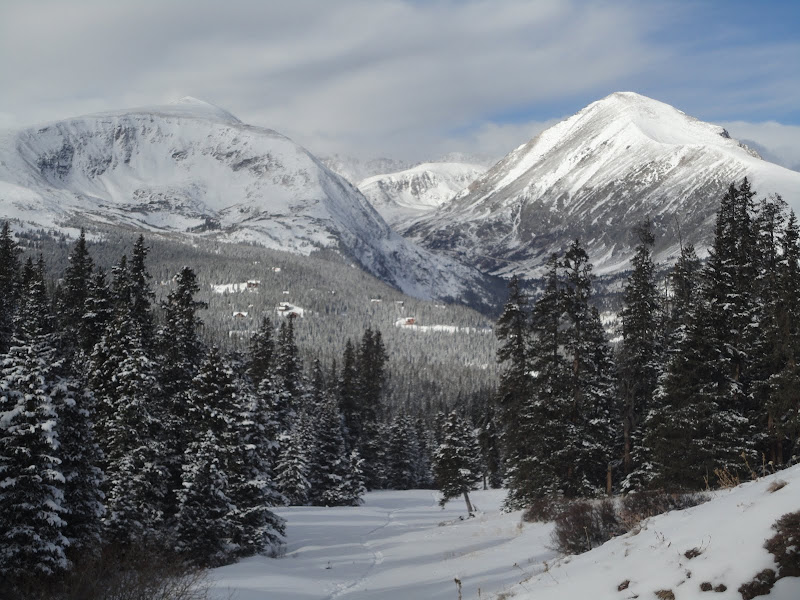 I'd especially like to do a winter ascent of Quandary and Sherman this year, and could use company.
Anyone let me know if interested (snowshoes generally OK depending on what/when). I hope to do more of this this winter, I didn't do as much last year as I would have liked, but I'd like to learn and push the daily elevation more this year.
Posted by mike_hinterberg at 8:42 PM