Credit where credit is due: the idea of "track bagging" came from a discussion on George Zack's site earlier this summer:


As I was scouting around, I saw something very nearby that is almost always as beautiful to me:  a track 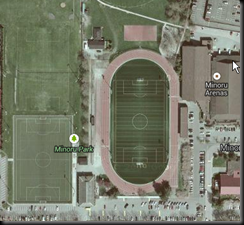 There is always a question with tracks if they are open to the public.  Google Maps Street View was actually available for this track, and it seemed to confirm it was very accessible.

Hooray!  I know that some folks abhor the track, and frankly the honesty of tracks sometimes weigh on me but I at the same time I enjoy “bagging” a track while on the road in a manner probably similar to some getting a county high point.


The discussion comments were interesting, with people mentioning specific tracks and lists of tracks, even though most of the crowd here in Colorado generally tends toward trail discussions.  Tony, known more for ambitious mountain routes than flat road running, mentioned having visited numerous tracks with college buddies in all of the lower 48!
This certainly suggests that people have been interested in checking out tracks around the country for years, of course, but now we're in an era where it's even easier to share and look up information about them quickly.

I have hopped on tracks on occasion when traveling, and only occasionally blogged about them,
but GZ's discussion made it more obvious that it's fun for others as well to share and read about various tracks.  They all have their various differences, and it's interesting to note the discrepancies of public access.

Anyway, thanks to GZ for starting that discussion. As he travels a bit and likes the track, I think he'll end up with quite an interesting list of tracks "bagged!"