Decalibron: Racing on the 14ers

The "Decalibron" is a circuit of 4 14ers in the Mosquito Range above Alma, CO.  Among peak-baggers and braggers, it's a relatively easy effort (under good conditions) for 4 14ers.  I had it in mind for "someday," but the relative shortness of the hike, vs. the perceived aesthetics and driving distance, put it on the back burner for awhile.
That was until learning about an informal, and free, race of these mountains, put on with sponsorship from local Breck companies like Vertical Runner running store.  In the mood for something of this distance, and a relaxed atmosphere with other runners, Nick and I made the drive from Ft. Collins.

The day was clear but blustery, and snow earlier in the weak meant that there would be patches here and there.  We arrived with enough time to get settled and then cold again for a casual late start, and then we were off.

I figured somewhere in the 2-3 hour range, yet still way overpacked, wearing a hat and puffy orange gloves that are about 20 years old, with 2 water bottles (less than one was needed) and about 4 packs of gel I never ate, in addition to another layer in my pack.  I still go a bit conservative "up high" and keep a bit of a hiker mentality despite the race; other folks just went with the clothes on their backs.
Anyway, we spread out into a jog up to the Cameron-Democrat saddle, knowing that the bulk of the sustained climbing would occur in this early part.  Then, as it steepened on a rocky trail, we all switched to a powerhike.  I felt decent here and passed and chatted with a few guys, and we also started intermingling with day hikers.

I think the saddle went at just under half an hour, and then a bit more rockiness up to Democrat, with some ice and snow on the steps.  Soon enough, 4 or 5 guys were making their way down, and then I reached the top of Democrat, which had a flag and a bowl of poker chips at top.

The idea was, 4 poker chips would "prove" the 4 summits* (except for skirting just below the summit of privately-owned Bross).  I snapped a quick photo and looped back.  As I headed back down the saddle, I stepped like a grandpa down the icy steps, being too cautious not to slip.  Numerous people blew confidently and smilingly past me, and it's definitely a weak point of my mountain running.

We passed more dayhikers as well, but now most of us had gotten past most of them.  Cameron was ahead, advertised with another flag and poker chips at the end of a gradual gravelly ascent.  The wind blew us all around sideways, and having a pack and jacket didn't help with that.
Lincoln was more aesthetic as a slightly pointier peak, but was still quick work.  Otherwise, the gravelly flat area between the last 3 mountains, while generally described as being featureless and boring, was actually an interesting moonscape and pleasant jog, other than the wind.

We made our way toward Bross now, on a trail that headed more directly below the summit and avoided a full retrace to Cameron.  On this aspect, there was one obvious patch of ice right on the trail.  I ran across it, attempting to be flat-footed and get some grip, but I fully Supermanned onto the ground.  I rolled with momentum and kept on running, sort of enjoying the early taste of snow.

The trail to Bross was still hundreds of feet away and below the summit, but the final poker chip and flag were there, with markings to show the final descent.  Bross is jointly owned by private mining interests, without current general public access, although mixed information suggests that at least one of the owners is fine with people summiting the mountain, and the other is mainly only concerned about liability.  Anyway, I watched other people descend the mountain, and the trail here was otherwise impeccably marked and obvious, but it turns out I got lost anyway!  Somehow I ended up higher and even backtracking from where I intended to me.  Realizing my error from the sightlines of a loftier perch, I quickly regained the correct trail, chastising myself for costing several minutes and race places with a foolish mistake.

Finally, it was onto the descent of Bross, which is notorious for steep, loose scree.  Many folks mention it as one of their worst 14er descent experiences, so I was prepared for ugliness.  We did not take the direct line down the gulley below the summit, which is clearly looser and steeper, but rather the more "environmentally friendly" trail along the ridge, which is still loose and steep in places.  I did fall straight onto my butt a few times, but I'll take dirt and scree over loose talus any day.  In fact, I found the descent of Bross, taking just over 20 minutes, to be both runnable and quite enjoyable: one of the highlights of the circuit.  It's one of those cases where running in a sideways, zig-zag pattern (in shoes) is much easier than hiking it slowly in boots.

Gerry Roach says it's hard to make Bross look good in a photograph, so here's my attempt: 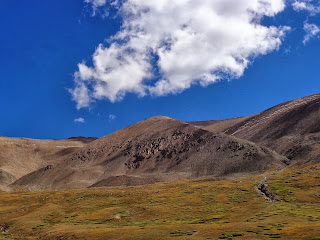 We came down climber's-right of the mountain, and then followed the trail along the stream and short waterfall.  This was also a pleasant view to watch subsequent runners finish up their day.

It took me somewhere in the low 2:20's to finish, about what I expected, and still a half hour later than a "sluggish" Nick -- whatever -- and 45-50 minutes after the winner.
We hung out a bit while waiting for the last finishers, enjoying a Sierra Nevada Pale Ale or 3.  The atmosphere and Summit County runners were very chill, a definitely pleasant vibe when contrasted to the intensity of, say, Leadville, which was the last race I was even at.  And remember, this was a free race, right?  Well when we were all done, they raffled off some cool prizes.  Nick scored a bottle of bourbon, and I was lucky enough to win a very nice aluminum camping table that I had my eye on and knew would make J happy.

So it was a fun morning, and the route and mountains were even more pleasant than I thought.  While I'd still want to avoid it on a summer weekend, I wouldn't mind running or hiking or skiing parts of it again. But the race atmosphere was very cool, so THANKS to those that set it up!  Here's a Vertical Runner logo for my 3 readers:

Anyway, the race quickly rose to one of my favourite races of the year and even all time (sorry Quad Rock and Black Hills), and I hope some of the Summit County folks come out to the Front Range for some of our runs as well: you're welcome anytime!
Posted by mike_hinterberg at 7:34 PM