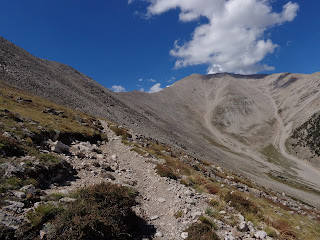 Caleb and I had a free Saturday to spend playing outside, so we wanted to maximize our time at the end of summer.  (And, as it turns out, the last weekend before the massive flooding).  But what to do?  Mountain bike?  Hike a 14er?  How about both?

This route was inspired in part from an old "Colorado Mountain Biking" Falcon guide, which suggested parts of the Colorado Trail (Segment 13) in a possible loop that included dirt roads and pavement, essentially connecting Cottonwood Pass Rd. with Mt. Princeton Road, and with an "optional" summit of Mt. Princeton.

The map route looks like this, beginning at CR345 just past the CR342 junction (parking on the shoulder wherever there's room).  The warmup begins with a 3-mile climb up a road that leads to Bald Mtn. (9833'), before connecting on the final switchback to a cutoff trail that leads to the CO trail. 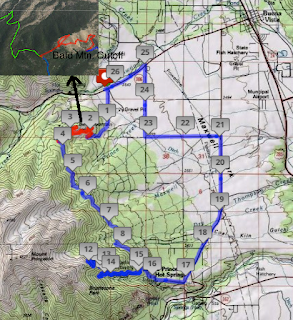 Apparently, the "upper" part of the CO trail is loose, rocky, and rooted, so the Bald Hill cutoff option may save some aggravation.  The road itself is fully rideable at a steady grunt.

Of course, being very near the top, it was worth heading up to the antenna'ed summit to check out the views, and to claim yet another "Bald" summit.  (Coincidentally, there is a Sheep Mountain directly west, across Cottonwood Creek, with "Sheep" being one of the top Colorado mountain peak names as well). 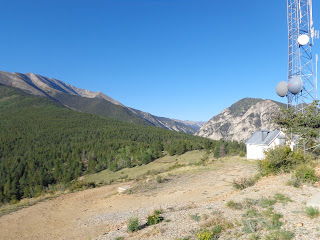 Anyway, just below the Bald summit is a signed ("No motorized Vehicles"), faint trail that leads about 1/4-1/2 mile through the woods, occasionalyl meandering past potential campsites and social trails, before connecting to the clearly-blazed CO trail.

Soon enough, we were enjoying delicious rolling singletrack through the woods. 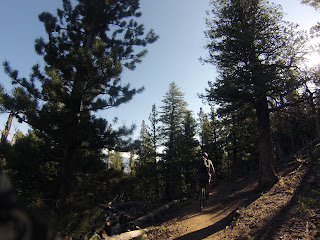 Up and down, up and down, with some good flow at times inevitably ending with a tight, switchbacked creek crossing, before climbing and then descending again, as we crossed several gulches on the flanks of the Collegiates.

At one point, however, we did emerge fully from the trees for a smooth blast across the tundra: a small taste similar to Crested Butte or Monarch Crest. 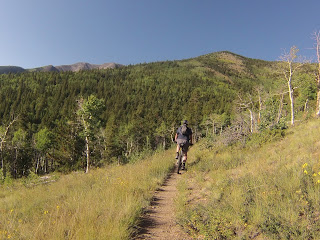 Now we were off of the CO trail and onto Mt. Princeton Road.  There are mixed reviews about the driveability of this section (depending on weather/time of year), but a fair number of higher-clearance vehicles still make it easily past here.  Although it was a solid grind -- again, all rideable, and in fact slightly more forgiving than the Bald Mtn. road -- it was nicer to be out on a bike, enjoying the early colour changes, than to be in a car. 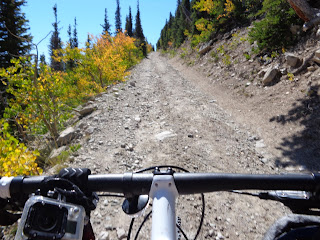 It was a very nice day -- warm, even.  Actually, hot, with no real wind at all and temperatures in the 80's.  By taking our time with the mountain bike approach, we didn't know how much we were risking with storms, but pressed forward with no thunderheads yet forming.

We only saw 3 or 4 parties descending on the road, and a couple of 4x4's, but it really wasn't a busy road, either.  So mainly a steady push: first, to the antenna towers near 11,000' where several more vehicles were parked, and then to the cairned trail that led up to Mt. Princeton.

Finally, after about 4 hours, we were at the Mt. Princeton trail, and it was a fun change to hike instead of bike for awhile.  We stashed the bikes in-view just off the side of the road, near where a moto-bike was parked, and were pleased that nobody bothered them.

The Mt. Princeton trail, then, is a straightforward affair that steadily climbs on talus, with occasional diversions and cairns of slightly alternate routes, but the main idea is obvious.  It's not supposed to be overly difficult, but I was pleasantly surprised with how stable the surrounding rocks are, compared to some other Sawatch Mountains. 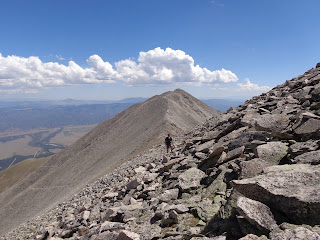 We moved steadily well into the afternoon, seeing maybe 15-20 people descending, with the weather still in our favour.  We thought we'd be the last to summit for the day, but there was one more group behind us.

Finally, we were on top, with the summit to ourselves, almost no wind, and great views all around! 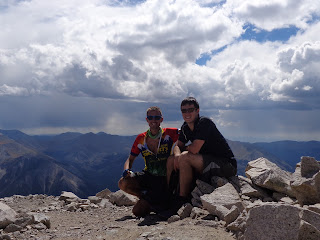 This was the first 14er Caleb and I had been on together, with hopefully more to come.
On the summit, some rain was visible in the distance, but nothing ever threatened the rest of the day.  The rest of the hot, hot day: we still had a fair amount of mountain biking to do.

We returned to our bikes, happy to see them unmolested by man or beast (sometimes marmots chew on strange things), and enjoyed a bomber descent down Mt. Princeton Road.  This was an underrated treat!  The road has just enough smoothness and rolling bumps to make it fun -- in contrast to the lower parts of the Mt. Antero road, which is a bumpy mess.  In this regard, I definitely recommend biking the road as a fun alternative to driving slowly or hiking on the road, and this is one of those cases where riding in both directions is faster than running as well.  Even if you just started from the lower TH, it would be a more fun day.  Driving all the way up to 11,000 and parking near the antenna towers seems like a long drive for a short workout!

We debated returning over the Colorado Trail -- it's rolling, so there would still be some fun downhill on the way back -- but opted for the slightly longer (13M vs. 10M) road option to make a quicker loop.
We got a bit of fast pavement action as well, in the upper 30's/low 40mph range, before flattening as we headed north on CR321.  It looked like roads to the west would have connected us with less mileage, perhaps, but the roads themselves and the public/private status weren't obvious on the map.

We then came at a crossroads of CR325, with this building on it, and headed west. 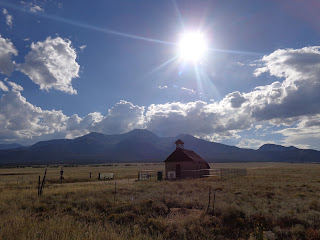 
Posted by mike_hinterberg at 9:21 PM