J and I took a quick trip out to Oregon over Labor Day weekend, and after driving down the coast from Portland the previous day, we stopped Sunday morning in Eugene, Oregon.  Besides being a generally vibrant and complete town in general, the town is still largely identified with the University of Oregon campus.   Inside that campus, in addition to the more recent development of incredible football facilities, lies the famous Hayward Field track.

Among tracks in the USA (and even the world), this is the big one, with a history that bookends the legendary Steve Prefontaine by decades on either end, with a host of Olympic trials, championships, and the efforts of world-class athletes.  Although I know this is a special track, having been out on other collegiate tracks, I was hoping to feel the grip of the track under my feet for just a few minutes.

Ahead of time, I looked for any information on public hours, but found nothing but a vague reference to posted hours on a sign on a fence.  We pressed our luck and just showed up.  From the outside, the facility was impressive, immense...and locked. 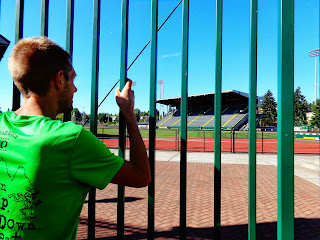 We walked around the outside of the facilities a bit, taking a few pictures, and looking for any open gates or signs regarding access (there were none).  I had mixed feelings of wanting to enjoy seeing the track in person, but wanting to be out there.  We made a full loop of the track.

I saw a couple guys in yellow shirts getting ready for a run.  The were from the Oregon Track Club (OTC) and mentioned that they didn't know of public hours, especially on Sundays, and only knew of specific running groups that happened to use the track.  They also pointed to the Bowerman building nearby, which is open during the week and has some signs and pictures inside, but currently had a group of collegiate runners in it: the XC team was getting ready for a workout, and the building also houses the locker rooms.

It seemed I was out of luck.

I walked around a bit more, and checked out a shorter track on the south side around the tennis courts.  Some guys were wrapping up some intramural soccer practice, so I chatted with them.

"Hey guys, any idea of how to get on the track?"
As I mentioned my desire to run just a 4 simple laps on the track, they were all friendly and tried to be helpful.  The first guy said, "Well, it's not like there are armed guards on the roofs or anything," insinuating I could easily hop the fence and likely not be bothered.  I had certainly considered that on and off for the last half hour, and I'm not always morally opposed to the idea of harmless trespass on vacant patches of forest or mountains, for example, but really preferred not to push it here, and mentioned my hesitation.

The next guy disagreed with his friend's suggestion: "Yeah, I probably wouldn't do that.  It would be similar to trying to run out on the football field," he suggested.  It's funny, then, to think that, although I've enjoyed watching football games in historic places in the past, I've never seriously thought about running out onto Lambeau Field or Camp Randall -- the latter is also a public University and has artificial turf that would see minimal damage from a quick 100-yard jog.  Yet, in my mind, track feels somewhat more accessible and egalitarian.  Why is that?  Maybe that assumption is false.

"You don't even usually see students ever running on the track, in fact," he mentioned.  Another interesting observation, as I think about how easy it is to hop on the CSU track right here in town.
So it seemed that this hallowed field was perhaps a bit different than others.  I can understand that, but I was still dejected.

He mentioned a few other places to check out on campus, and also checking out the pictures and posters in the Bowerman Building.  We headed back over there one more time.

We headed in cautiously, where two men and a boy were standing and chatting on the edge of the track.

"I'm sorry, excuse me, is the track open at all?  I'm from out of town and was really hoping to take a quick jog on it," I blurted out.

"What are you looking to do?"

"I'm sorry, again, just a quick mile...we're from Colorado and, of course, it would be a dream just to run out on this track."

"Yeah, go ahead," a trim-looking guy said, confidently and unconcerned.

"Thanks so much, I'm Mike" as I introduced myself, "Are you guys affiliated with the University or anything?  I know there was XC practice going on, and didn't want to get in the way"  I asked, just to make sure the permission was valid.

"No problem, I'm the assistant cross country coach," he replied, "we're waiting for them to finish up."  (They were running a loop somewhere throughout town).

So that was it.  If getting out on the track was like being out on a major football field, then getting permission from a coach at a premier D1 athletic program was like....what?  Would any average Joe off the street get permission to go out onto a football field?  Did I look enough like a runner, could he read the burning desire in my eyes that outshone lack of talent in belonging on that track, is track truly more egalitarian?

Or did I just get lucky?

I was out on the track for a quick warmup, but my heart was racing from excitement already. 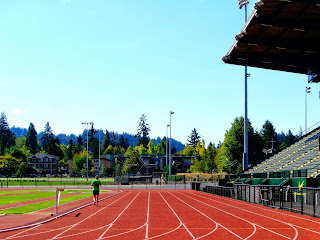 After my warmup lap, I saw that the inner lanes were blocked/closed off, so I respected that and stuck to the middle.  J stayed around for some pictures, and I'm very pleased to have these wonderful memories. 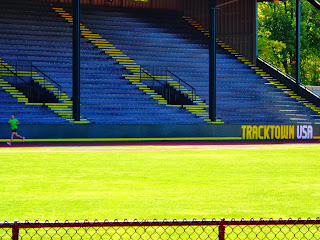 The warmth and humidity made up for the extra oxygen, so I didn't break any PR's, ending up in the mid 5's. 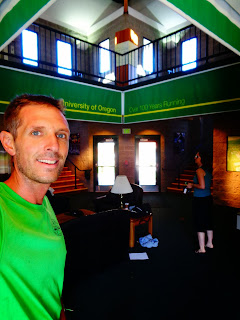 That certainly made my morning.

We headed out to breakfast, then -- and if you're reading this for informational purposes, Morning Glory Cafe was awesome -- and then it was onto another jog on the 4-mile, soft-surface "Pre's Running Trail."

J read a book in the park and digested breakfast while I headed out on the loop.  "Do you want to take your phone, in case you get lost?"  I scoffed at getting lost at a presumably popular, short running trail in a major city.  Whatever!

I glanced at the trail description: there are 3 loops ("red, green, blue") totaling  4 miles around the perimeter, with the mileage numbered sequentially on the map, suggesting to me that running clockwise (at mile "0") would be a good natural start.  And, if I made all left turns, I wouldn't need to pay particular attention to the turns.  Simple. 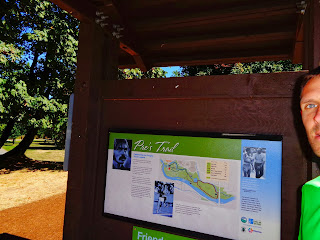 I only intended to jog, but this is how I had it built up in my head: the trail network would be labeled by colour, with incremental mile markers perhaps every quarter or even tenth of a mile: this is Pre's Running Trail!  I bet there would be some seriously fit folks out here for a workout, on a gorgeously sunny day especially, and it was nice to see that bikes weren't allowed.  So I bet you could get a great workout here! 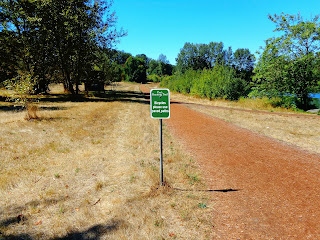 The route was mostly scenic, but here's the reality: the trail wasn't labeled well at all, and had numerous other pedestrian and bike path crossings; in fact, more runners were on the alternative, parallel paths (likely out for a longer run).  There may have been a couple mileage markers eventually, and the loop intersections weren't easily distinguished.  The majority of people I saw on Pre's Running Trail were walking, often with dogs, and almost all in the opposite direction of travel as me, and I saw 2 families biking small sections on the trail.  At some point, near the football stadium, the trail merged onto the sidewalk, and then a section of trail was blocked off for construction, so I searched around before guessing where the trail might continue.

All in all, it was worth checking out, but I think Pre might be a little disappointed: people are sacrificing the gift!  The extensive bike/ped network in "Track Town" overall is still quite a gem for the community.
Posted by mike_hinterberg at 10:48 PM