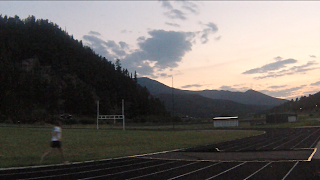 It's been awhile, been feeling a bit out of it for various reasons, but feeling better and time to add some things to the Blog from the summer.
It was a pretty mellow one, with some great pics and adventures (and misadventures) and some fun pacing gigs.

So how about some track pics, instead?

Spurred on a bit from a discussion on GZ's blog, I realized other folks having an interest in running on random tracks.  I hadn't really gone out of my way for any tracks, but if you're in the vicinity of a cool track, why not "bag" it?

In Colorado, I've enjoyed running at Potts Field in Boulder, and numerous times at CSU's track, both with gorgeous foothills and mountain views.  I checked out UC Irvine's track a few years ago as well.  As a non-collegiate jogging hack, it's fun to check out some of these places.  But otherwise, what makes a worthy track? Completely subjective.

One track that's always caught my eye is Platte Canyon High School.  It's in a beautiful mountain setting, right next to 285, somewhat removed from town facilities.  Yet it's about the halfway point between the Front Range and the mountains, on a popular weekend thoroughfare, so you also have to appreciate the idea of being cooped up in a car for several hours and then being taunted with the freedom of an open track.

Anyway, I passed the track on the way to Leadville last month, driving solo, so figured, "Why not?"  (Although having had a belly full of Chipotle was one good reason not to...) I pulled off on the gravel shoulder near sunset and headed out for a quick 4 laps.

Nothing else much to report, except for I also decided to run barefoot.  I do this occasionally on the much softer CSU track.  This ended up being a worse idea here, with a grippy but abrasive surface.  By the time I finished, one of my big toes was sticky with blood!  That was a bit stupid right before I planned on pacing that weekend, but taping it up the next few days made it tolerable.

So, check out this beautiful track sometime!  But wear shoes.

If you're in the vicinity of a cool track, why not "bag" it?
I'll report on more cool tracks in the future (which means I'll do this a couple more times and then lose interest), and appreciate suggestions.  The Idaho Springs track is also on the list.
However, I was also able to run on what is perhaps #1 on my list (if I had a list) recently....guesses?

Posted by mike_hinterberg at 4:53 PM