I've run pretty much everywhere, in all kinds of weather, when travelling: that's what I love about it.
It's a great way to see a new area, reflect on things, and take a break. I've been lucky to have strange but enjoyable runs in strange but enjoyable towns on 4 continents. The most challenging runs, though, would seem to be in the middle-of-nowhere places in the U.S. But these are also the most surprising. Despite skepticism, I've had great and memorable runs in Oklahoma and Kansas, for example.
Still, my faith was to be tested in Sandwich. Looking at the map, and mapmyrun, and the satellite view, things looked bleak. It's not just me -- my friend Todd, also at the wedding, had done the same thing and reached the same depressing conclusion...and he grew up in Iowa!
He was interested in a 4-to-5 mile jaunt, and was worried about slowing me down, etc. No worries, running with a willing friend, especially one you don't get to see too often, is about as good as it gets. Even if the scenery was disappointing, we'd still have a chance to chat.
But you know what? Like always, the run was still quite enjoyable. Cars gave us sufficiently wide berth, eventually, but it was clear that running wasn't usual in these parts. And that's a shame, for once we made a turn along some country roads, we were surrounded by rustling, dry corn stalks, with the last bits of life in their leaves upturned towards a glorious morning sun.
Once we got back to the hotel, I took a quick romp through a section of woods next to the hotel, finding some game trails littered with yellow and brown leaves, a few deer hunting stands (thankfully I was wearing bright neon yellow), long wooded vines that hung from tall trees, and a creek; and I kicked up a couple deer on the other side. The scent of leaves at the end of Fall immediately brought back memories of trampling through the woods as a kid: should I lose my sight someday, bring me out to those woods in October and November and I should enjoy them still.
The next morning, after the wedding, I dragged myself out of bed with just over an hour and a half to spare for a run. I headed East towards Yorkville, again, but then South. I had a rough destination in mind: the lower Fox River.
When looking on the map, I had seen a bit of arboreal coverage along the river, including Maramech Woods nature preserve and Silver Spring State Park, so I guessed it would be more scenic. I also wondered, and later confirmed, about the river itself: the lower Fox river does indeed wind south from Wisconsin, down past Chicago, before hooking West near Yorkville.
As I approached the river valley, I enjoyed classic pastoral scenes of cows grazing lazily in the sun. A large buck crashed through some brush across the street, as the tree cover grew denser. The landscape transitioned from the clearing and plowing man had done -- the active and necessary destruction, the ambitious and honorable -- from the domesticated to the wild, mysterious woods which had been directed by other forces. Here, I found where I preferred to be: in the shadows of the woods, among the fallen leaves. 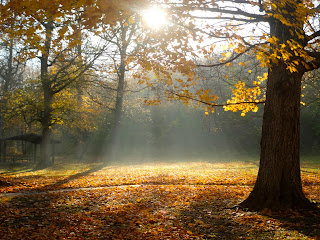 I only had a short amount of time before I need to head back, but I blasted down the leafy, rolling paths as quickly as I could, before taking a break to view the Fox River.

The Fox River runs around my birth town of Mukwonago, Wisconsin, which means I've seen it thousands of times. It also flows directly through Waukesha, Wisconsin, and near the Carroll campus -- the place where J and I ultimately had met the groom. And here it was again, flowing through these tiny towns in Illinois. This spurred on thoughts about life, impermanence, context, the transient nature of things, defining things by their actions (verbs) instead of mere existence (noun), etc. on a glorious Sunday morning. 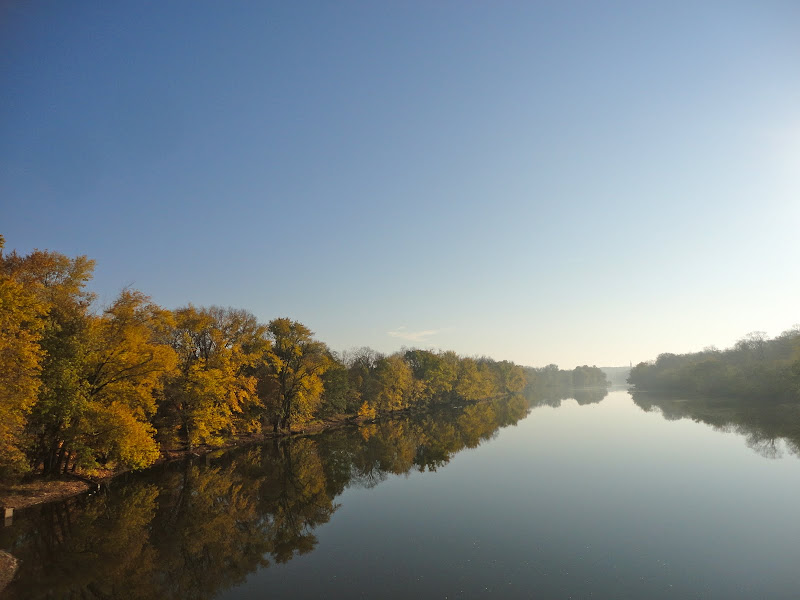 But this experiential religion --a run on a gorgeous morning -- is the inferior and odd one. Would it be more comfortable to hear the old stories inside a building instead?
Who am I to say?
Posted by mike_hinterberg at 9:59 AM