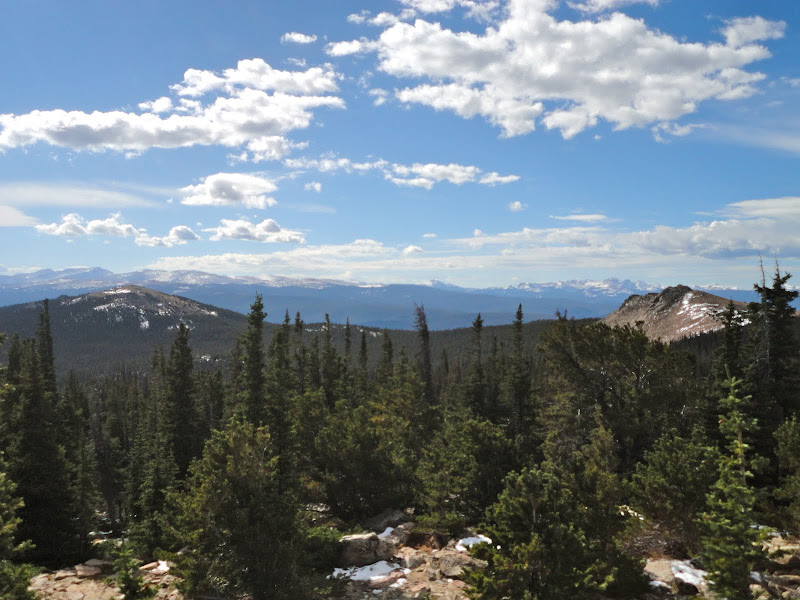 Looking for something mellower, and with wind moving into the high country, it seemed like a good day to head to Red Feather Lakes. 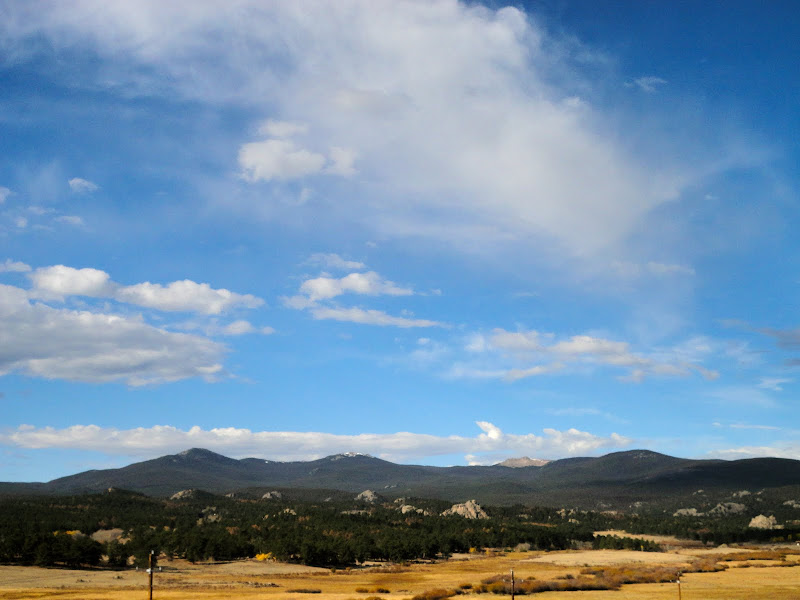 No I-25, no I-70: just a mellow drive up north. (Or bike ride: it's just over 50 miles from my side of town, and made a nice out-and-back century a few summers ago).
Staring at maps west of town, on Deadman Road (note: this is CR86, not 162 as denoted on the Trails Illustrated map), I decided to check out an interesting loop combining North Lone Pine trail and Killpecker trail.. The trail loop itself can't be more than 12 miles or so, including a couple miles on the dirt road to join the two. But just off of these trails are some prominent peaks of the Laramie range, worth some off-trail exploring. The highest named peaks -- North Bald Mountain, Middle Bald Mountain, and South Bald Mountain -- poke just above treeline, giving great 360-degree views. 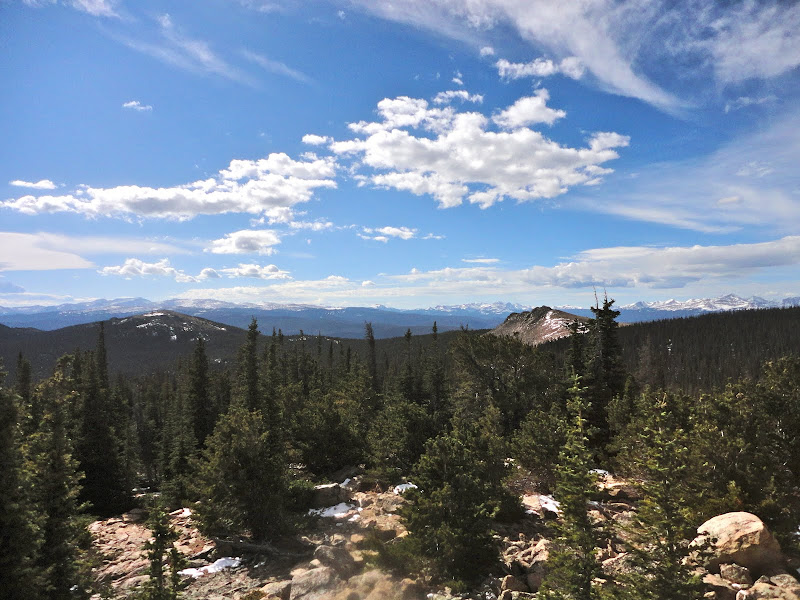 South (Left) and Middle (Right) Bald Mountain, seen from North Bald Mountain
North Lone Pine trail is a steady but pleasant climb in the trees. After running for about half an hour, the trail took a left and started descending slightly/flattening out. At this point, I suspected North Bald Mountain was above, to the right/West, but didn't have a direct view of it. Nonetheless, I began the bushwhack upward.
The lower part of the slope was more open and had less deadfall than other dreadful bushwhacks in Northern Colorado, but just as I was getting content with this fate, a bit more rocks, trees, and snow appeared, slowing things down a bit, but still quite manageable. Soon enough, daylight poked through the trees: except for a bit of rolling terrain, I was on the top of North Bald Mountain.
This afforded nice views of Middle and South Bald Mountain. Unfortunately, it's another descending, and then ascending, bushwhack over to Middle Bald Mountain. At least it's easier to find via dead reckoning, and although not easily runnable, it didn't take too long to get up there. 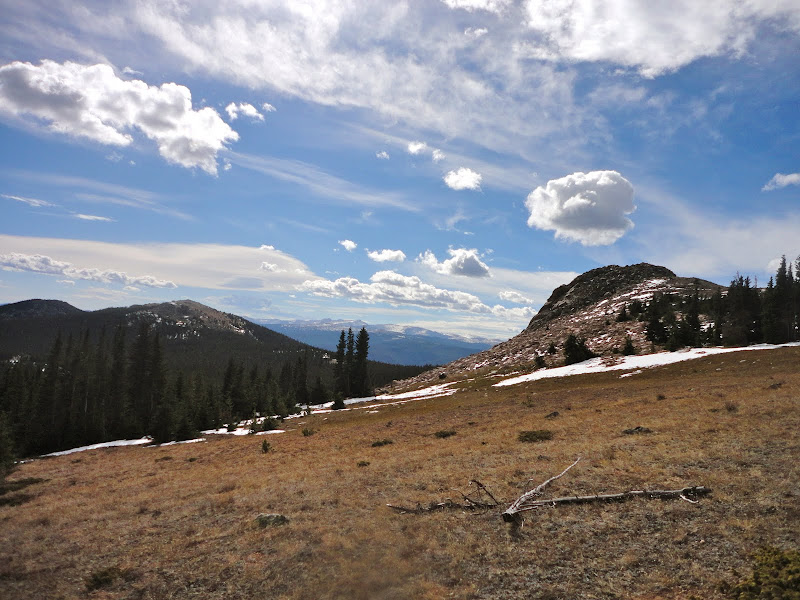 Middle Bald had more interesting rock formations and scrambling opportunities on top. I took in the views, and then slowly downclimbed on large, solid boulders, toward South Bald. In retrospect, it would have been easier and quicker to drop down the mellow backside to the Killpecker trail.
I headed toward South Bald, knowing that a few trails were down below in the thick of trees, but that the trail can be subtle in some of the thicker spots. I hit one of the trails (North Lone Pine, again), but inexplicably headed the wrong direction: I happened to hit it when it made a short bend, heading downhill, which at the time was the direction of my goal, before it headed very much North again.
I recognized my mistake after 10-15 minutes, turned around, and then re-questioned my initial decision about which way would really be the best. I wasted a good 30-40 minutes running back and forth a few times and double checking the map, but once I was on track, I found that my original intersection of the trail was within 3 minutes of my goal: an intersection with Elkhorn Baldy Rd.
Back on track, I headed up toward South Bald, taking what I think was the Swamp Creek cutoff. (Things get a bit questionable back there when offroad vehicles make their own trails). Nonetheless, it was easy and obvious to climb up to open areas and get clear views of South Bald.
South Bald is the highest of the named peaks, and is an enjoyable, quick climb. But I didn't spend too much time in the wind before retracing my steps back to the Elkhorn Baldy intersection.
Now it was time to check out the Killpecker trail. Although at similar elevations as North Lone Pine, these aspects held a few inches of consistent snow, which was enjoyable to run in. 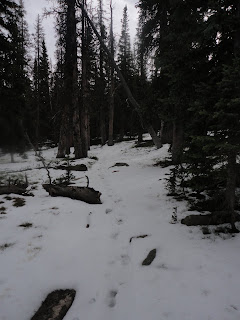 I could even make out faint cross-country ski tracks! Somebody already got some skiing in. I've read about these trails in Snowshoe guides, and Killpecker is especially nice because the rocks aren't too large on the trail, and both trails are mostly protected from the wind. For some possible turns, the backside of Middle Bald, and possibly South Bald, are mellow-angle and north-facing. I'll definitely be back to check it out in winter!
I would recommend the loop as a run, as both trails are quite runnable and enjoyable. Bring a good map! Further exploration may include some of the lower "bald," rocky points sticking up in the area. Otherwise, Middle Bald is right off of Killpecker trail and easily accessible, and South Bald isn't too much more of an effort -- I'd recommend those for great views. North Bald might not be worth the effort.

Posted by mike_hinterberg at 7:28 PM