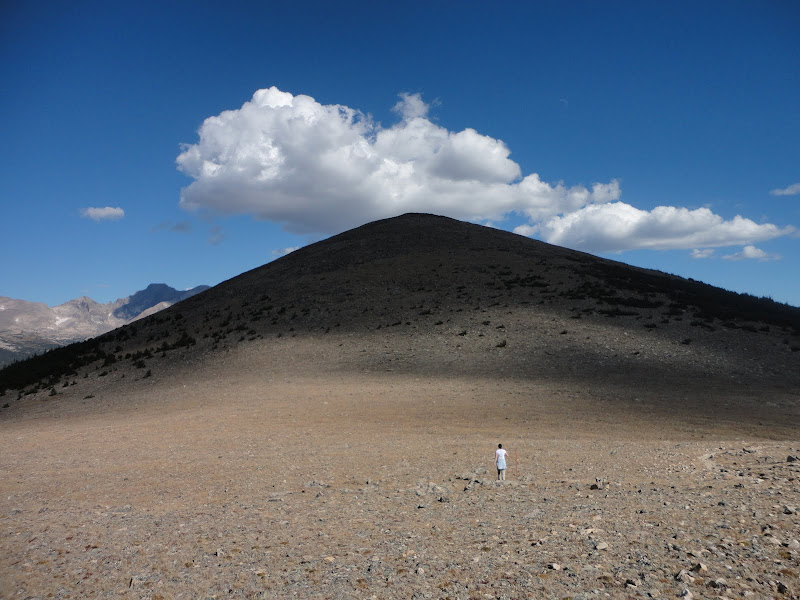 
My bride and I decided to spend a fantastic fall morning with a more leisurely hike up Meadow Mountain near Allenspark. I had spotted Meadow Mountain and its higher neighbor, St. Vrain Mountain, during recent forays into Wild Basin. Since the area appeared to be near-peak in terms of foliage viewing, and the summit would provide fantastic panoramic views, it was nice to minimize driving on I-25 and avoid I-70 altogether. Finally, I would get to check out yet another trailhead and trail, having recently decided there's no reason not to visit every single trail in the park at least once.

Both St. Vrain Mountain and Meadow Mountain are less-popular hikes, but much of the hiking information I do find is in regard to snowshoeing. Undoubtedly, with ample snowfall, the great views and relatively safe approach on the mellow angles of these slopes make it a great choice for winter excursions. In fact, the St. Vrain TH is a turnoff near the end of Ski Hill Road in Allenspark, which is historically named for several ski areas which used to be in Allenspark. Now, the community is a very quaint outpost near RMNP, tucked off of the main Peak-to-Peak highway. It gets almost none of the attention of its famous neighbor to the North -- Estes Park -- yet has more than twice the charm, and is worth a visit any time of year.

The hike is a typical forested creekside trail with a steady climb to treeline. The aspen are immediately stunning near the trailhead, with some brilliant orange on display: 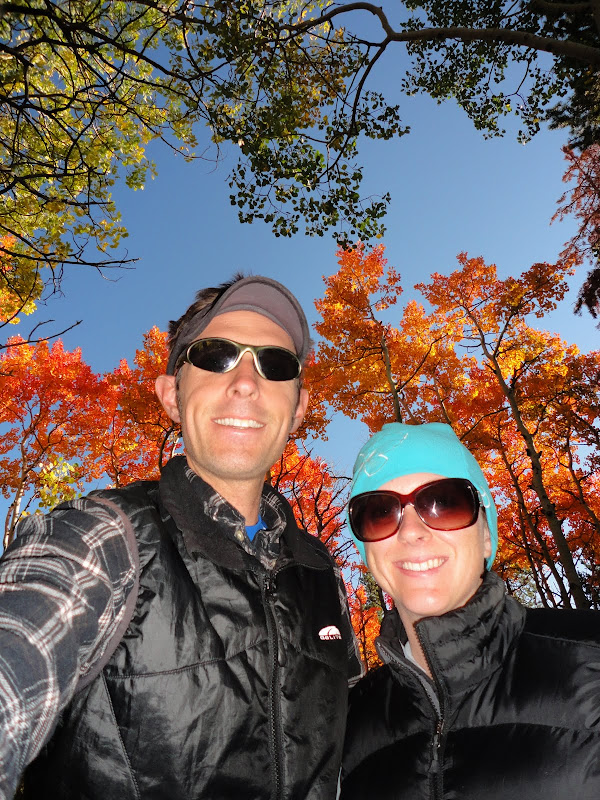 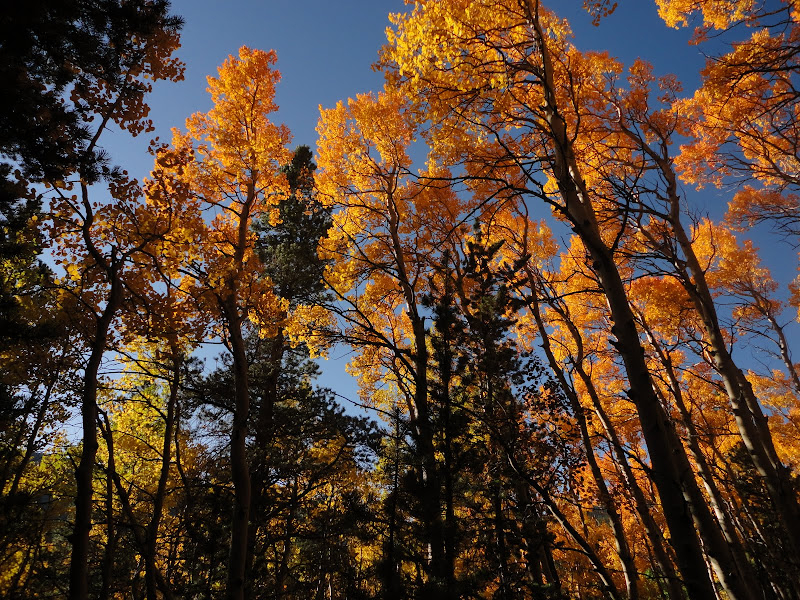 A hike in Fall continues in colourful splendor as the trail leaves the forest for open meadows of deep reds, and distant views of amber leaves below: 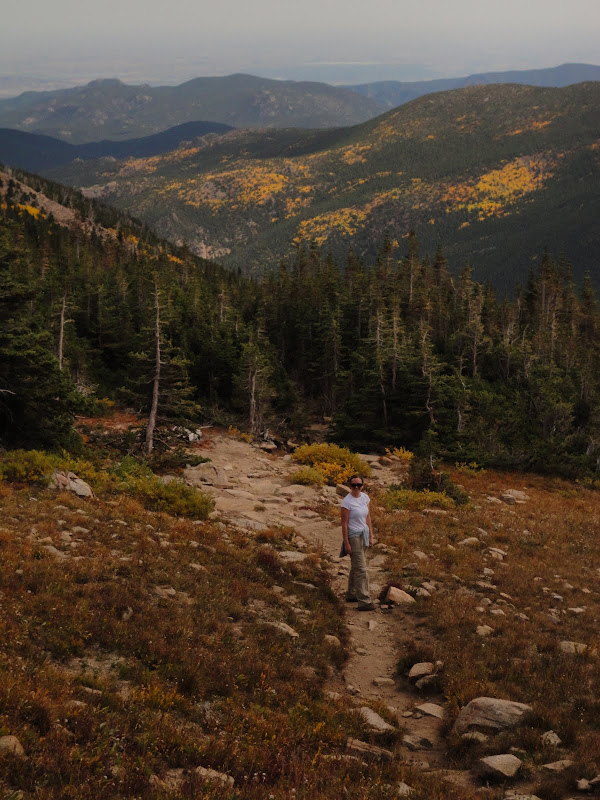 So far, the hike nicely met J's requirement of being "Over the River and Through the Woods," which means mostly on trail, without long slogs on talus, snowfields, scree piles, etc., as it approached the saddle and National Park Boundary (having crossed through IPW) at a saddle between Meadow Mtn., some unnamed points just above 11,400, and St. Vrain Mountain. We had planned on a decision between Meadow Mtn. and St. Vrain at this point. Prior to the hike, I was secretly hoping for the "higher-is-better" choice, but seeing the two options in front of us, I imagine words like "steep," "talus," and "krummholz" being thrown about as curse words should we have chosen St. Vrain. Truthfully, Meadow Mtn from the saddle was an appealingly short hike that was mostly tundra, with just enough talus to be fun but not annoying, and would give us better views to the North. Easy decision.

With extra time at the top, low wind, and sufficiently warm temperatures, we lounged around a bit with the summit to ourselves, nicely able to celebrate our 9th anniversary from earlier in the week: 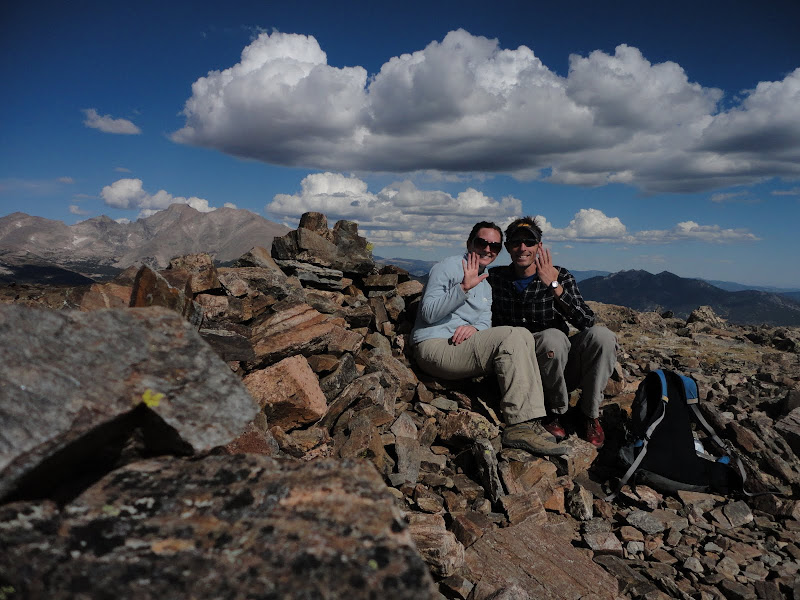 The broad summit had no visible marker or summit log, but has an electric box with a solar panel and antenna, and otherwise sublime views in every direction. We were in no hurry to leave the summit, with only gentle clouds in the area.

In all, this was a spectacular fall hike, even better by enjoying it together, and I can imagine returning for a bluebird winter day. We hadn't left the trailhead until almost 8:30AM, yet had only seen 2 other people on the trail, and took plenty of time for foliage pictures. On the way down, we did see maybe half a dozen parties as the clouds began to roll in. I hesitate a bit, but this hike is a great suggestion for foliage viewing and acclimatization hiking for visitors. It is similar in difficulty and elevation to the much more popular Twin Sisters hike (also a free-parking TH that accesses RMNP), yet has better views and much less human traffic.
Posted by mike_hinterberg at 3:27 PM