The border between Colorado and Wyoming is a fully human concept, set at the 41st parallel. Notwithstanding the Wind River Range, Tetons, and Bighorns in Northern Wyoming, most of Southern Wyoming generally gets the shaft in terms of terrific alpine scenery.

Except, that is, for the Medicine Bow Peak massif in the Snowy Range of Southern Wyoming. With trailheads above 10000 feet and just off of the paved Highway 130, Medicine Bow Peak is an instantly accessible alpine high.

And what a high indeed! Numerous well-stocked alpine lakes, streams, and giant granite boulders dot the landscape. Wildflowers burst with color, lupine and Columbines alike, the Colorado state flower itself knows no boundaries. And, this never gets too old: snowfields in August! 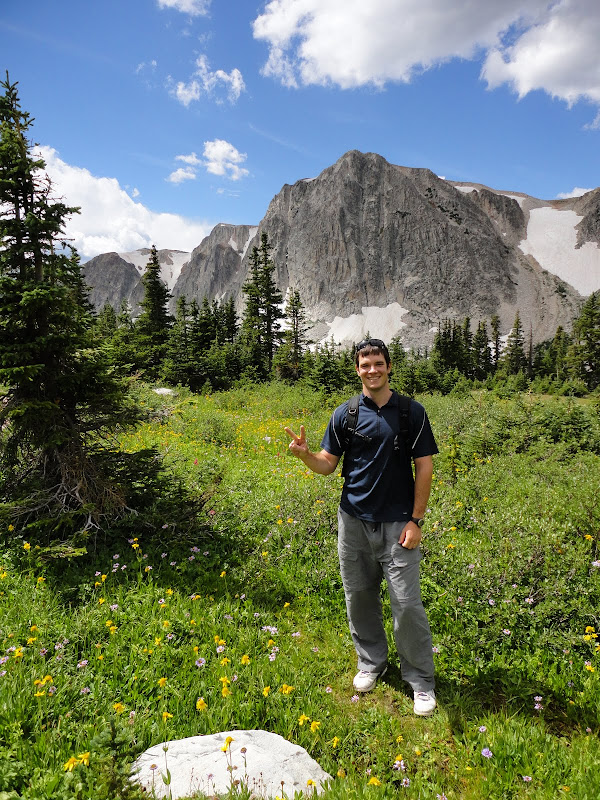 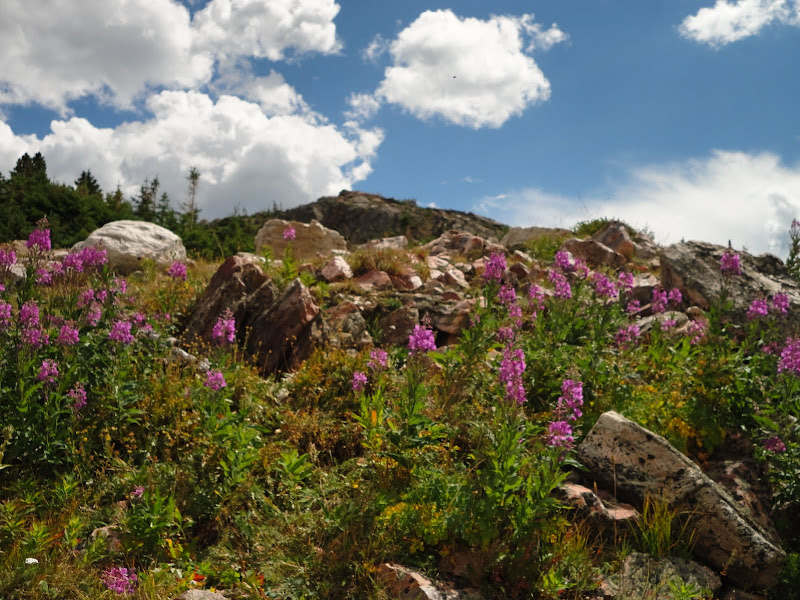 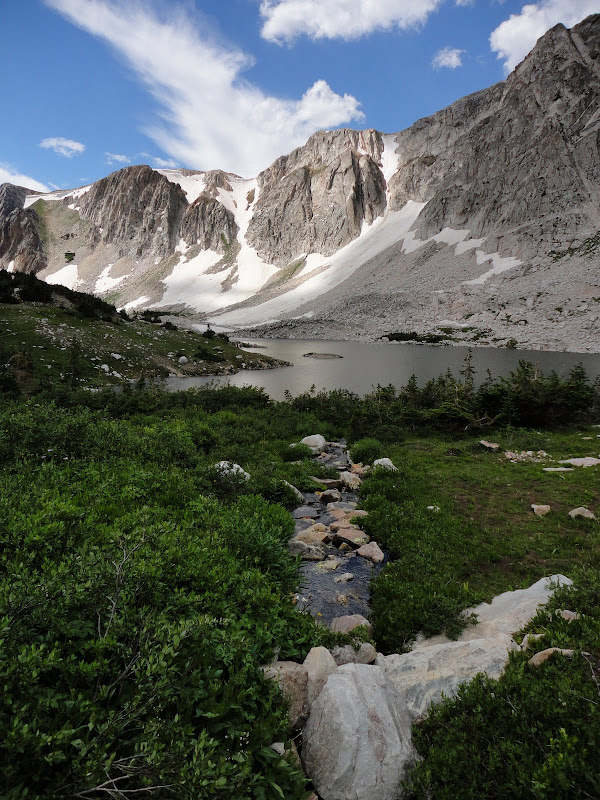 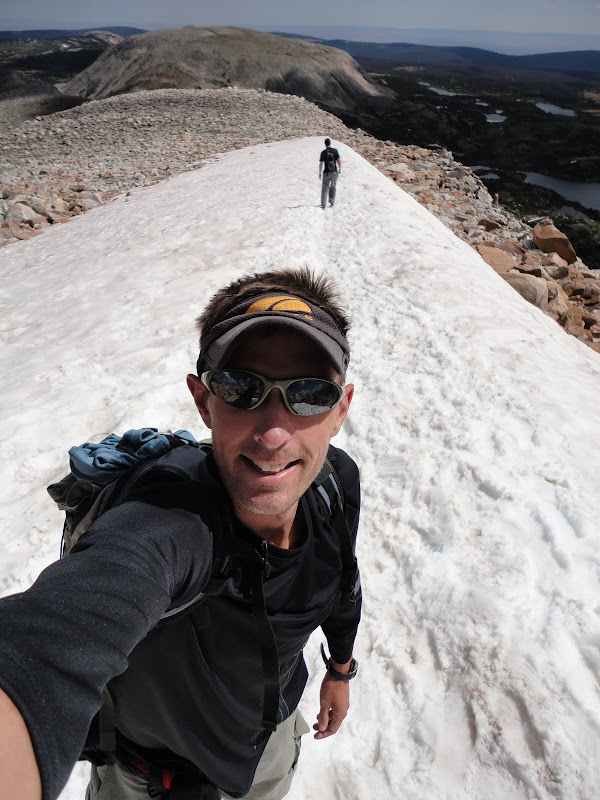 We strolled steadily up the back side of Medicine Bow Pk, taking our time getting distracted by the stone remains of a cabin, and heading off trail occasionally to peer over the edge to the lakes below. Solid cracks led up obvious climbing routes, and scrambled along some short sections.

The infamous Wyoming wind was not to be found on this glorious day, as we made our way to the summit, where we saw maybe 8 or so other people.
Obligatory summit shot: 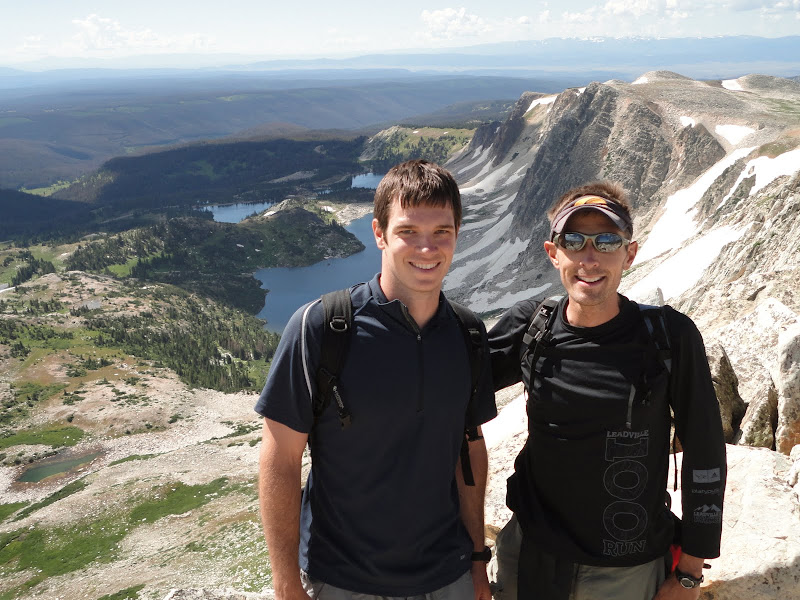 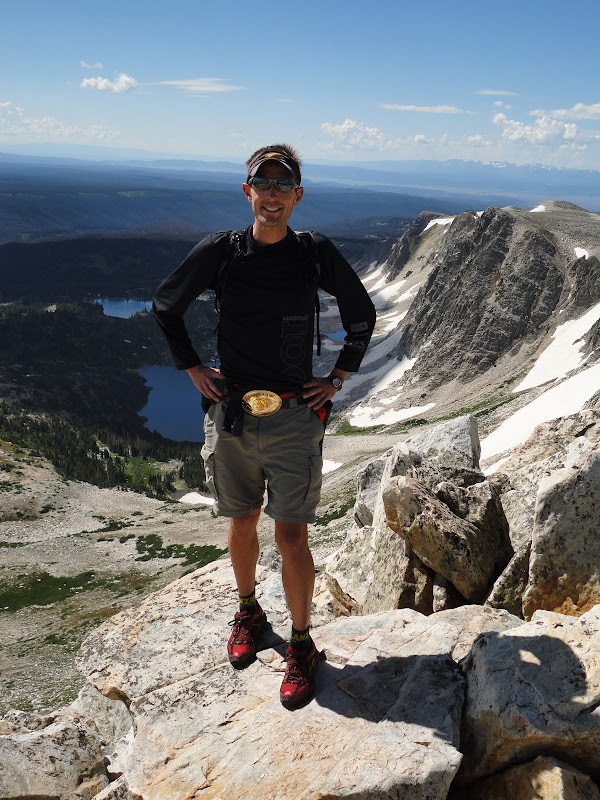 Heading down off the mountain, on a loop to the east, leads to a trail that switchbacks and descends quickly, to a saddle with Sugarloaf Mountain. This lesser peak (labeled below from an earlier view) has an interesting enough prominence to make a short Class 2 scramble to the top worthwhile: 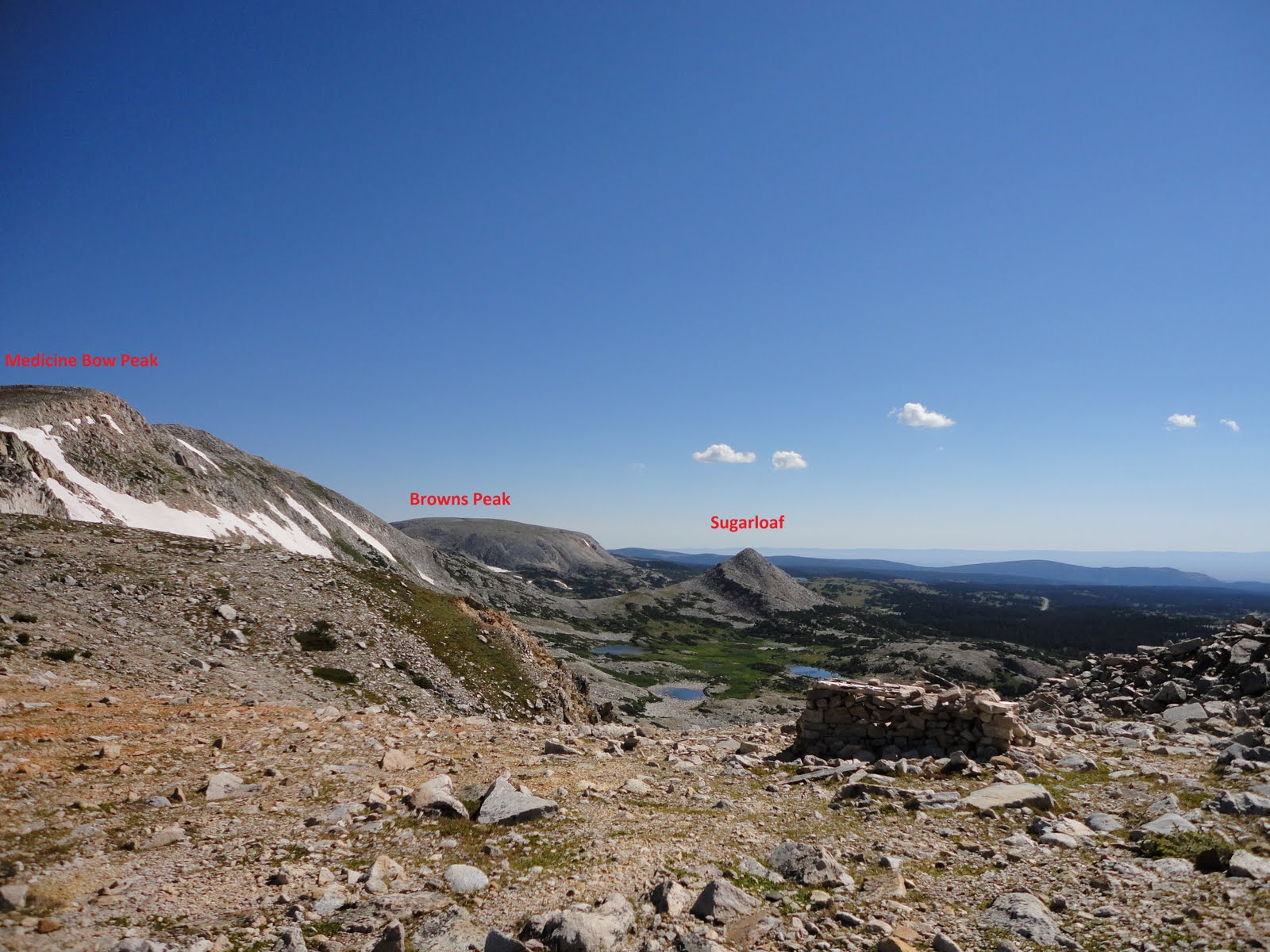 Etymological Digression
"Sugarloaf" is a name that refers to numerous mountains and hills around the world, from Brazil to Winona, Minnesota. This refers to the shape of a block of sugar, that used to have a long, conical shape for shipping and storage purposes.

When a person wanted a bit of sugar, he would simply cut a chunk off. Incidentally, the tool used for this is called "sugar nips."

Entomological Digression
Caleb mentioned a friend who was recently recovering from a brown recluse spider bite (ugh!). This led to a discussion of which insects we would remove from existence if given the choice. In a limited list including spiders, wasps, and the pine beetle, Caleb unselfishly chose the pine beetle. But when expanded to other insects, he easily chose the annoying horsefly. I hate horseflies as much as anyone, but suggested the mosquito, so as to reduce malaria and dengue fever. However, Caleb pointed out that I hadn't been specific about species, since when thinking about mosquitos, we were first thinking about the annoying but non-deadly familiar kind (Aves Minnesotus)...and if we wiped out horseflies, would we wipe out all flies? Considering the advances in scientific understanding of evolutionary development we've gained from the fruit fly, Drosophila melanogaster, I hope not.

But I digress.
*
Sugarloaf was a quick, fun diversion that gave us great views back toward Medicine Bow Peak. Now we headed down along a ridge and eventually hit the rest of the loop trail, where even more wildflowers and great views awaited.

All too quickly, we reached the shores of Lake Marie again, where schools of small trout darted out of the weeds each time our shadow cast a reflection.

This area is an easy 2-hour drive from Fort Collins, and is absolutely stunning. Even short walks and picnics along the shore would be worthwhile. More trails to nearby lakes deserve further exploration, as well as an intriguing canyon on the other side of the road.

Finally, this trail would be a great running loop as well. Start early to avoid crowds, and I would suggest going counterclockwise (opposite of our direction) to start the busier part of the trail in the trees earlier, and then climb up the rockier switchbacks, before enjoying a smooth descent along the plateau of the peak.

Posted by mike_hinterberg at 10:24 PM