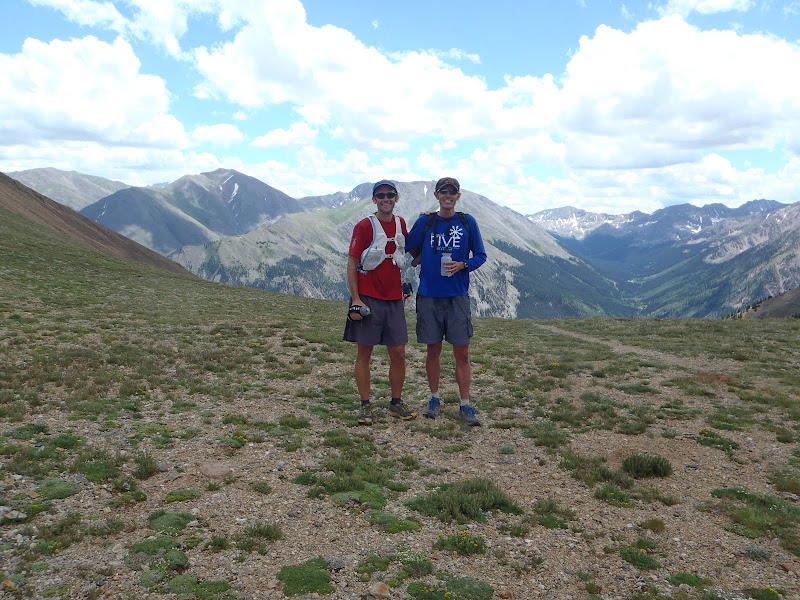 Favorite (and first) Erik Solof Quote:
"So I guess the bridge is out. I have a Visa with me -- would you guys mind carrying us over Hope Pass?"

Alex and I had arrived in Twin Lakes on a gorgeous morning to run the hardest (but prettiest) part of the Leadville Trail 100: The infamous double crossing of 12,500' Hope Pass. We knew that the course bridge was "out", and I recalled reading something about Parry Peak campground as an alternate bridge route further up Hwy 82. But when we reached the course location, we saw a couple of other obvious runner-folks parked and looking around.

And that's how we met Erik and Kate.

I was completely out of it when Erik made his first comment, thinking he wanted to drive around to the Winfield side or something. But when he cracked a smile and some more jokes, we caught on to the humor.

So we were all out ready to run the trail: Alex and I for specific training, and Erik and Kate, essentially, for fun. Erik had said he ran it in 2005 and it was a fantastic course -- "Gospel, man" -- but we were still unsure about the bridge, when a sheriff rolled through and gave us directions. The directions had more turns and references to the "new bridge" and the "old bridge" and such that I mostly nodded and hoped somebody else was paying attention. And so did everyone else! The course will go through the water, which will be fine in race day crowds, but for today it was nice to keep our feet dry and stick together as a group in the beginning and not have to think about it, as the river is running pretty solidly.

We followed Erik and Kate to a small gravel lot a few miles further up Hwy 82, got ready, and then headed up along the shoulder of the road. In less than half a mile, there's a "one-man bridge" which we fit 4 people on and then hit the trail. This training route heads back left (East) towards the race route. Within a mile or so, we hit the Little Willis/Big Willis junction, and re-grouped to discuss. Alex suggested a left onto Little Willis (correctly) as the most conservative route that headed in the general direction, although it heads down immediately and wastes some of the elevation we just gained.

After 20 minutes or so, we hit a 4-way with a "No Vehicles Allowed" sign that matched the course description. This, indeed, was now a right turn onto the course (and the course will have come in from the left and head straight through). Let the climbing begin.

Alex and I were set on our own paces, deciding to do the run to Winfield and back and regroup when it made sense and see each other on the course. As it turned out, enough other folks were out training (maybe 5-6 other small groups) that it was a nice combination of solitude and companionship, as well as an ability to figure out where people were through the "pipeline," as I asked later if people saw Alex/the guy with the red shirt, etc.

The first goal I had was to run as much of the Twin Lakes as I could and get some sort of split. I didn't have any numeric goals, as I didn't research or remember any specific numbers -- I wanted to remember the numbers I got and then see how that fit into any sort of pacing plan. The trail grinds steadily up through the trees, but is nicely shaded and pleasantly runnable. Eventually, the trail opens up into a splendid wildflower meadow: 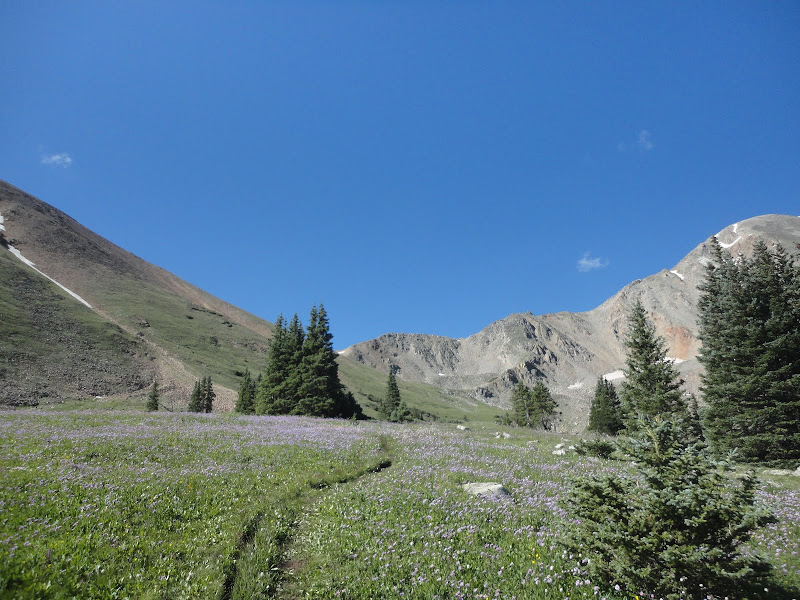 This is and the top of Hope are the last pictures I got before my camera died -- hopefully Alex got some good ones!

Hope Pass loomed in the distance, getting closer with each step, and I set a goal of running this entire side. I was happy to achieve it, at 1:32 flat, which included the pauses for directions.

But the entire time going up, the insidious plan of going up Quail Mtn. was also on my mind. I discussed this with Alex earlier: he thought I might have extra time and would be able to head up above 13k. I had initially thought about doing this on the return (if at all), but the temptation was too great. If anything, I could skip the Winfield Rd. in lieu of the extra elevation, but that would be less "course-specific."

But I'm more interested in heading up something high, so I scrambled up the scree and some climbing trails to the summit. Or, what I thought was the summit: the second hump of rock visible from Hope Pass, which I had seen before and focused on as the summit. There was a cairn there, and spectacular views, but no summit register or anything. I saw another point further up but was convinced it was something else, and was a bit hurried when I saw runners now coming up Hope Pass. (Later, at home, I know that the summit has some interesting mine structures on top, and I was merely on a non-descript 13,300' hump). 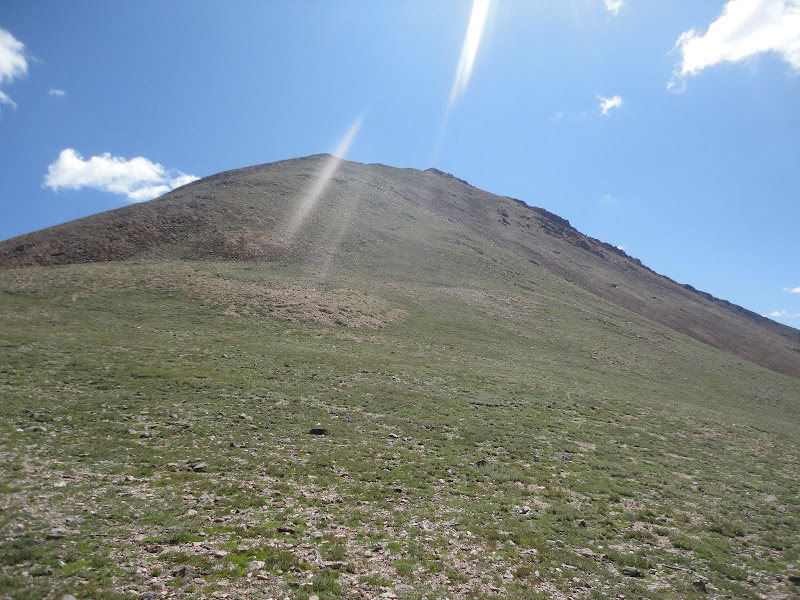 That excursion took about 20 minutes, and it took almost as much coming down as I was careful on the scree and talus (falling on my butt once) and not wanting to fall too far behind. I recombobulated at the Pass and headed down at a good effort.

I saw and gained on a group of 3 ahead, including a red shirt, but it turned out not to be Alex. But, it was someone who knew Alex: JP Martin from Ft. Collins. We introduced ourselves and chatted briefly for a few minutes, he was out with his 2 pacers. I took off then, hoping to catch up to the real Alex, who was even further ahead than I thought since I was mistaken in the group of 3 that I saw descending Hope.

I enjoyed this run down and seeing folks climbing from the Winfield side, and hit the lot in 31 minutes, before turning right and heading up the road. I kept watching the road for the other runners but didn't see them until right before Winfield -- at least it was a nice distraction from the otherwise boring, uphill road! This section was about 25 minutes (and the same time down) to the bridge, but not the campground.

So I saw Alex, Erik, and Kate looking great -- the latter two hadn't initially planned on the Winfield section. I was a couple minutes behind Alex, but needed to refill/filter water. I sat down by creek awkwardly and got a strange leg cramp, so I shifted around until that felt better and ate some chips. This break ended up being over 10 minutes so I needed to get moving.

Now this side of Hope is much steeper, and I remember it as such from hiking up it a few years ago with J. How far up could I run it, though? Not far at all, as I hiked nearly all of it with my heart banging in my head. Whatever. I think this is common but I'll see what people are doing during the race. I am OK with a sustained hiking pace though if that's what the situation calls for.

Above treeline, I saw Alex a good 5 minutes ahead, and JPM's group heading back up. I entertained myself with the thought that I now can stare up at 13,400+' Mt. Hope and Quail, and think, "At least we don't have to go over those -- we're taking the easy route over the pass!" I hope I can remember this in a couple weeks.
Alex waited a few minutes for me up top: our climbing was done! 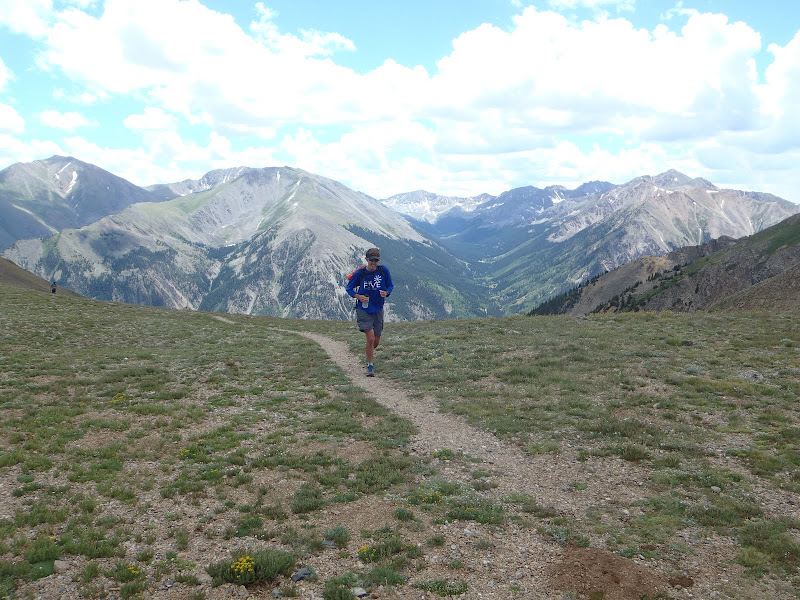 Now we headed back down from whence we came at a social pace, running together and chatting. I tried taking some pictures but with a broken screen I didn't know until later that the pictures failed. We were still enjoying great weather, and it was nice to get back into the shade of the trees. That last mile descent to the 4-way was an absolute blast.

The last couple miles on the re-route dragged a bit, including the kidney-punch climb back up to the Little Willis fork. Oh well: that's non course-specific. I decided to grab another bottle of water rather than thinking about it for another 25 minutes. Back to the bridge and the car. Didn't catch up with Erik and Kate again, but glad to have met them, and really glad to have a fun day running and chatting with Alex. Ready to be back there in 2 weeks!
Posted by mike_hinterberg at 8:06 PM