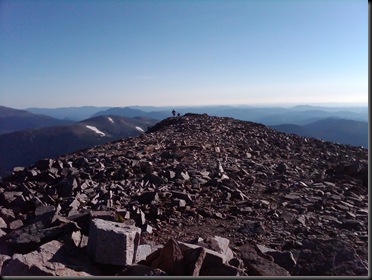 
Pic taken by and stolen from GZ.
Justin and I approaching the summit. Behind us, mountains beyond mountains, and an inversion with a low layer of clouds blanketing the front range cities below.

George put up a post mentioning Mt. Audobon for the morning, which was something I was considering for a morning mountain run, and I had coincidentally borrowed the parking pass from my brother-in-law earlier that day. I had never been up there, and it has a good bang-for-the-buck of solid elevation and gain on a Class 1 trail, without having to drive too far or past Denver. And by starting early, we were able to beat the typical crowds and parking madness (actually, even the descent wasn't too bad, with respectful and attentive hikers). I was very glad to meet him and Justin in the parking lot (and, later, TZ and JZ), and enjoy the run with those guys.

My small camera is still broken, so I'm glad to see some of the pics from GZ and Justin. The drive out included a gorgeous full moon revealing the jagged outline of the mountains to the west, followed moments later by watching the sun rise while going up Brainard Lake road. I thought I might have missed the guys, but saw the rockin' minivan pull up moments later.

Justin got us going in a hurry, and despite everybody talking about taking it easy, I wasn't finding it incredibly easy to chat leisurely without running out of breath. Those guys seemed pretty comfortable with it though. But it was a great pace and we were quickly above treeline in the full sunshine and practically no wind.

Justin and I peered over the saddle towards the Divide, then power-hiked up to the Audobon summit. Awesome views all around, and some snacks, and then the descent. Justin admonished us to take it easy so as not to ruin our races, and then they took off. I quickly took a step next to a sharp rock that poked my inside heel, and then definitely focused on not doing anything else stupid. This route wasn't overly technical by any means, but Leadville is significantly less so.

This was a great run for the morning, really enjoyed getting to know JM and GZ better, and meeting some of GZ's family, and look forward to more runs with the guys in the future. I was a little more winded going up than I would like, but it wasn't insurmountable and hopefully a couple days at altitude will help. Everything else feels fine, a few tweaks in the right leg that haunt me but are manageable and should feel better over the week. Hopefully this workout helped, rather than hurt anything, but mainly it was fun!


Posted by mike_hinterberg at 7:20 PM