Taper Strategy, One week to CPTR 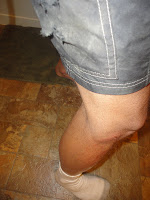 Don't fall off your bike in a taper!


The CPTR 50 is the first repeat race I've ever signed up for, I think, other than our work-sponsored 5k fun runs. Last year at this time, I had raced at least once every month and had some good feedback. At the same time, I felt kind of worn down by May, and only really started feeling good in the summer. This year, I have no idea what to expect. I feel slower in general, as I've mostly been plodding along week after week; but also better at recovering day-to-day. I feel like I'll do better mentally and energy-wise, but I'll have to see how the legs hold up. If it makes any sense, though, I feel more prepared for a 100M in August at this time of year than I did at this time last year; and really, the goal has been getting ready to get ready for Leadville.

One drawback of not keeping track of weekly mileage is trying to remember what the hell I did exactly before previous races at that distance. I know I tapered more, but kept the miles up this time, mostly just because I felt like it and didn't feel like stopping running (~30-40% of of my weekly miles are just commuting to school anyway). My groin injury thing that was plaguing me since October has really gotten better in the last month -- I won't celebrate that until I can run 50M on it. But, somehow I tweaked my hamstring on Friday and it's still a little sore, that was on a 4-hour run, which might have been a bad idea on paper but otherwise felt good. Plenty of time for it to get better.

Mentally, just excited to get out into the hills next weekend.

I decided to stretch out the hamstring and avoid running with a mellow ride at Green Mountain in Lakewood today. Hit all the trails, enjoying the Rooney Valley trail for the first time, and then repeated back up to hit the other side. Specifically picked these easy trails so I didn't risk an endo on one of the waterbar-laden trails pretty much everywhere else around Denver, but somehow managed to do a rookie rear-brake stop through a gravelly corner (my front brake was loose so I overcompensated with the rear, again just because I was lackadaisical about keeping my brakes adjusted) and hit the ground.

Just a little rash and blood on the white cotton Target socks (from experience, good for soaking up blood, creek water, everything). Didn't have camera so picture is less dramatic, later, after I washed off and picked out little ingrained pebbles. It'll all be good by Saturday though. More bummed at putting a hole in my favourite (only) mt. bike shorts, and a small hole in my wool jersey and rain jacket. Didn't ruin anything, it just means I'll be wearing clothes with holes in them until I change them into clothes with patches on them.

Anyway, excited to see everybody else getting the races in this time of year, from competitive 5k showdowns to marathons to repeat treks up local mountains. If you're racing again soon, stay safe and don't do anything stupid!

And
If you're / go-ing / to Byoo-na, Vis-ta...
See you on the trail, or at Eddyline Saturday afternoon, and/or Mt. Princeton Hot Springs Fri night and maybe Saturday.
Posted by mike_hinterberg at 6:23 PM