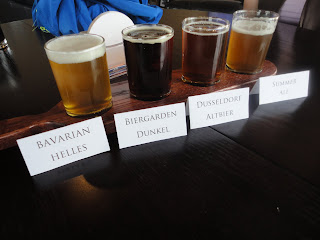 The Doctor is in.
Apparently, Jeremy Gobien decided before he finished his Ph.D. in engineering that he wanted to open a brewery with his wife. East Denver/Aurora is glad he did!

Copper Kettle has been open for a few weeks now, and I finally had a chance to check it out. Although it's in a strip-mall wasteland off of Parker Rd. in East Denver, it's only 2.4 miles from our apartment -- by foot or bike -- though it would be a longer drive. That's because it's only a short distance off of the Highline Canal Trail, south on Valentia, just south of Mississippi. So, even if you live closer to downtown, I'd recommend saving the aggravation of driving and enjoy a leisurely ride on the HCT. On Sunday (yes, open on Sundays -- closed Mon and Tues), J, Neil, DJ, and I had a nice walk out there. 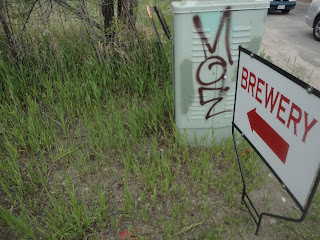 The brewery is cozy, and well-appointed with dark wood and leather. It's a great place to hang out, with games and a flat-screen TV. They have pretzels but no food, although they've had occasional food trucks (opening weekend, and last weekend, according to Ben)...hopefully that becomes a more regular occurrence.

They have a great selection of beer already, with rotating seasonals and experimentals, with a solid base of reliable brews. Some of the limited releases have different prices (taster, pint, or growler), but they also have different price specials during the week. Their growler fill prices (~$5 new growler, $9-$10 fill) is more reasonable than Dry Dock in Aurora, and they already have t-shirts and logo glasses ($4).

On to the beer itself. First up was the Mexican Chocolate Stout. I was pleasantly surprised by the spicy cinnamon, in addition to the expected chocolate flavour. I could imagine enjoying this more by the fireplace in the winter, apres-ski -- or, more likely, apres-eating and apres-drinking -- so I hope it sticks around all year.

More appropriate to the sunshine is the Summer Ale, which is brewed with wheat and similar to (but maybe smoother) than Blue Moon. I don't do wheat, so I'll pass, but it's another solid option. Instead, for a reliable all-year beer, the Bavarian Hells Helles seemed similar to NBB Blue Paddle, which is a good thing in my book. 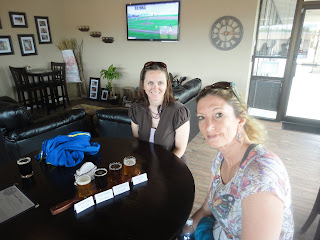 The Copper Ale was a little disappointing (I'm making stuff up here to sound like I know what I'm talking about) in its colour, which was more of a cloudy orangish-yellow than I expected. But quite tasty and fruity otherwise. There's a Saison, Altbier, and Rye beer that aren't usually my favourites, but again may be good options for the sophisticated crowd.

My favourite, though, was the Biergarten Dunkel. I liked everything about this beer, from the dark colour and smooth pour, to the malty aroma and taste. I look forward to seeing what the reception of this beer is in the future, and the future success of what looks to be a solid new brewery.
Posted by mike_hinterberg at 9:10 PM