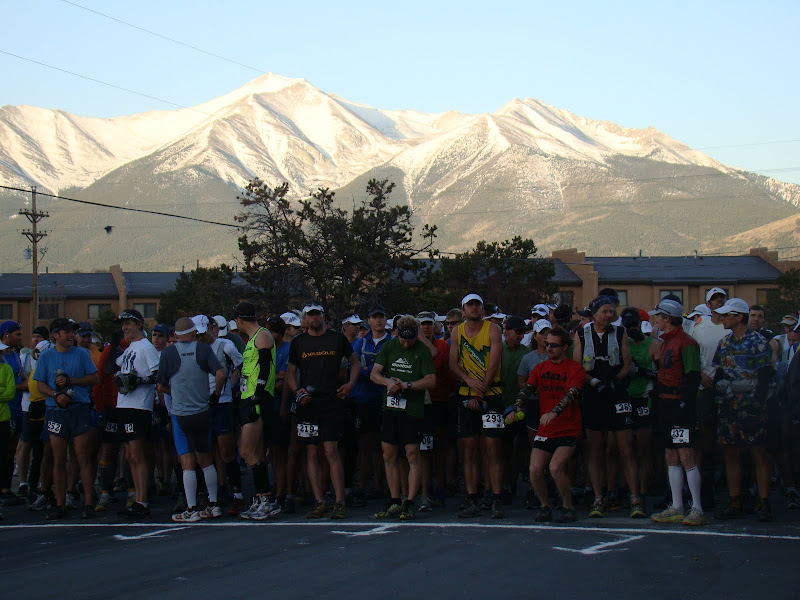 Happy to get my first race of the year in, and spend a beautiful day out on the trails with some great folks. I gambled by going for sub-8 when I probably didn't have business doing so, but how else do you find out? Dropped off a bit after mile 38 or so when I realized it wasn't going to happen, but still happy with the results. It's almost 45 minutes faster than last year, which is a nice improvement to see, and is my fastest mountain 50M (only other comparison is the Silver Rush 47M).

Rolled into town Friday afternoon, grabbed some food at Eddyline (even knowing that we'd be back on Saturday), and then headed up to Mt. Princeton Hot Springs. This trip was even more fun because our family joined us as well. We ended up having a great Cliffside room, and the concrete was still warm from the afternoon sun. I've been short on sleep lately with school, so I snuck a nap with a great waking view: 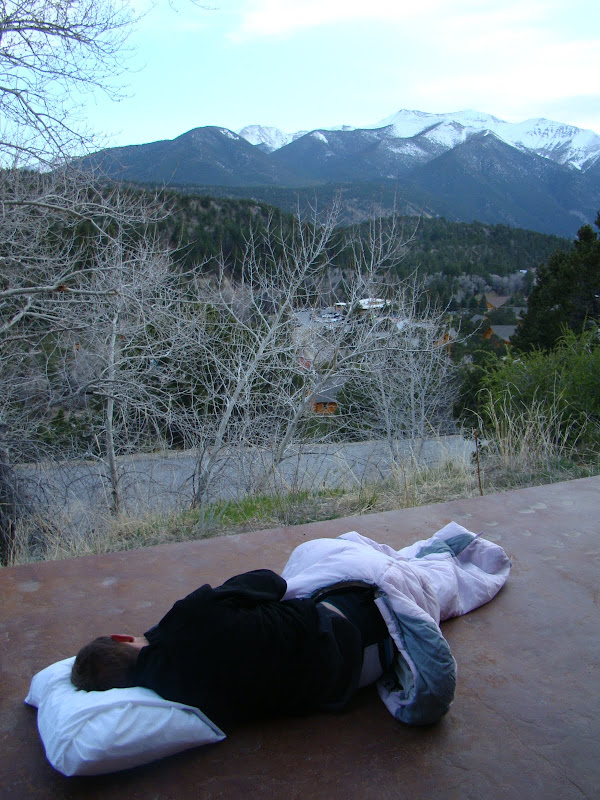 Once they arrived, we headed down for a nice soak in the hot springs. Since last year, they have some new, smaller natural-looking pools on the other side of the creek, in a "guests-only" area (no day-tripping riff-raff allowed, I guess). Those pools were nice and relaxing, so we pretty much hung out there until they closed at 10.

Tried to get some decent sleep, but never really seem to do so when traveling for a race. J & Debby got up to drive to the race, where we made a quick stop for coffee at the BV Roastery. I've found everything about their shop to be most excellent, from the prompt service and delicious fresh coffee, which is both reasonably priced and socially-conscious. And, they're open and ready at 6am, unlike Bongo Billy's. But, I've since learned they're -both- the same company, so it's all good in the BV.

We parked on the road and headed towards the start line. It was clearly warm enough already not to need an extra layer. I put my self drop-bag in the grass by the building -- that's a nice perk of the 2-loop course. I headed over the start and saw Chris from South Dakota, we've known each other from online and then in-person from a few years ago when we were both into road marathons, and then after Boston decided that long trail runs seemed like even more fun. Along with him were friends Nathan, Paul, and Ryan Phillips, who along with Chris helps out as part of the Lean Horse Racing team, soon to present the inaugural Black Hills 100 race next month. They put up great races in South Dakota and it's definitely worth a road trip.

Saw unmistakably-hatted-and-cotton-shirted JT at the front and wished him luck. Soon enough, without much warning, we were off like a herd of turtles. Last year, I was unsure of the last few sections on the road, so I paid some attention to that. Mostly, just cruised what felt comfortable. JT took off and moved well through the crowd on the road. I didn't think I'd see him again, but I saw him on the trails and ran a bit together, then passed on a double-track downhill. Somewhere after that, I saw tall white socks and a cleanly-shaven head: I hadn't previously GZ in person yet, but have enjoyed his blog observations like many. I was glad to settle in and chat with him for a bit, and very happy to hear he had decided on the 50. We hit the first aid station ~51 or 52 minutes, and it was time to do math, they said they were at "Mile 5" but GZ told me it was 5.8, which was much more favorable to the pace. Pretty well settled in now and just cruised to the next aid stations. Also met Jaime here (I'll look up his last name when results are up) and had a nice chat with him. Mostly stayed near GZ through the next couple of aid stations, and then eventually Darcy Africa. These clues that I was going out too fast should not have been subtle -- it should have been a big f'ing neon SIGN saying I was going out too fast. But it was nice out and I was having too much fun. GZ pulled ahead with a consistent, steady pace, while I was still ahead of Darcy, who I figured was definitely good for sub-8.

My plan was to go for a 3:45/4:15 split. With the heat coming in the afternoon, an even split didn't seem to make physiological sense, as it would clearly be a harder effort to maintain pace in the 2nd half. I was really enjoying the short stretches of semi-technical downhill. This is something I've been consciously working on lately. Unfortunately, that is about 3% of this course, so the long rollers ultimately drained me in the end. But the first half went well. On the long Midland hill section, JT caught up again and blew by me with a head of steam. I was OK with that as I was just trying to get done with that flat section, and happy to see Burch come around in the lead. But as soon as we hit the singletrack down I knew we were getting close, so I let it fly and caught up to JT again.

I hit the turnaround and tried to follow the rules nicely, where you go to your drop bag *before* the official turnaround so they have a way to keep track of traffic on the course.
Me (puts hand up): "285, pulling off to get drop bag."
Man:"285, are you dropping?"
Me:"No, I'm getting my drop bag."
Man to woman with clipboard: "285 is dropping out."
Me: "No, I am not dropping! I am getting my drop bag."
Man: "Are you dropping?"
Me (realizes I need to use different words): "I am going to continue to run 50 Miles today!"

They laughed and figured it out. I left the turnaround at 3:45, ditching my shirt and grabbing a fistful of gels.

Now the big slog back up the hill. The technical part is fun going up, but the gradual flat part isn't, it's just manageable because of all the folks coming down still, it's nice to look for friends and keep your mind off things. Saw Chris coming in looking good, saw Harsha. I caught up to GZ again who also ditched his shirt, but kept it family-friendly by wearing a thin black nipple strap around the mid-line of his chest. He was kind enough to give some words of encouragement when I felt strong...and then push me up a hill (literally) later when I didn't...and then I didn't see him again, as he kept a smart and steady pace, while I started fading a bit.

Anyway, that's how it went, the rolling hills in sand and the exposed sun between miles 30 and 40 started getting me, and started getting other people too. I got passed here a lot last year, and a few guys passed me here this year, but I generally kept them in sight this time so as not to fall too far back. But in the late 30's, I was at least a minute/mile off of any pace for 8hrs, so I just wanted to get this section done.

I heard JT getting closer between mile 38 and 39, and he passed me and a couple other guys on an uphill, mocking us for walking. (For the record, I watched him walk a few sections once he was past us...but also for the record, he was walking faster than I was, so there's that). I would've thought I could hang with him on a good day (for me) since I thought his other finishes were in the mid-8's, but he picked today to pull of a hell of a race. I would have been happy to see him pull of sub-8 but it was too close. Well done, though.

So the 2 guys within visual were Harry Harcrow and Tim Long, though I didn't know it was Tim at the time. They gradually pulled ahead through the sandy river washes and hills and I lost sight. I was OK settling in here but didn't want to get passed -- it turns out there wasn't really anyone behind me, but that cluster of guys ahead.

Once we hit some semblance of technical downhill, I enjoyed speeding up again, and focused on making it to the road. I was surprised to see Harry on the road, stopped briefly, and Tim up ahead. I gained a little ground on an uphill but couldn't close the gap, though I'm not even sure what I would have done if I had closed the gap. But it was nice to have people up ahead though so I could see how far the last left turn was. It was briefly comical when Harry left the road for the last smooth trail section near the river -- he walked briefly, turned around for the first time and saw me, and started running right away! Sorry dude. I know those guys just in front of me are solid and experienced ultra guys so I was happy to be around that group. 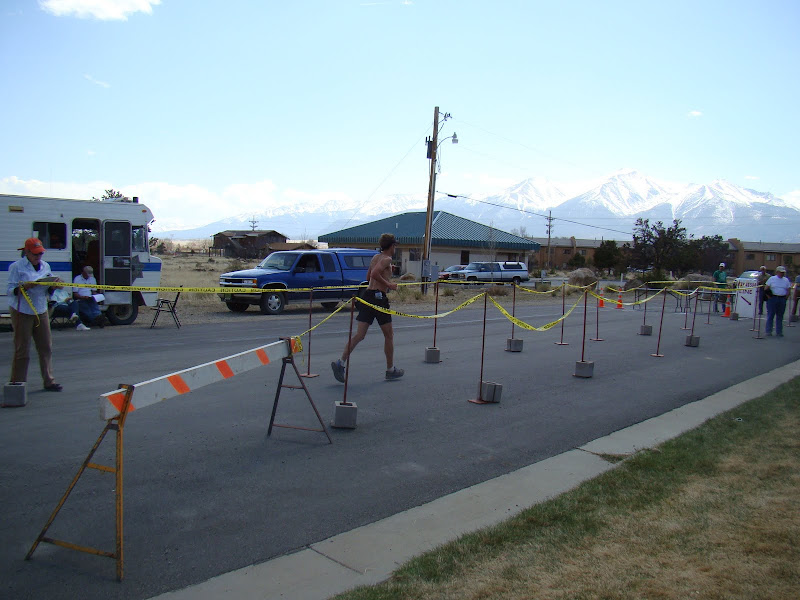 Glad to see the family there and glad they didn't have to wait too long, given an hour spread (8-9 hours if everything went *well*). Happy to see Meg and Ryan Burch, who won, and friends Carly and Jeremy; Ryan from South Dakota finished solidly sub-8. Found it JT missed it but put down a great run. Late saw that Victoria had a good run and saw Pete Stevenson's name as a nearby result(though I don't remember him on the entrant list) -- was that someone who said "Hi" at the turnaround that I didn't process in time? Unfortunately, Chris was still out getting baked in the sun after a solid first half, so I didn't get a chance to catch up with him, but glad he pulled it in and finished it up. Caught up with Tim and GZ, who ended up mapping his own route but was in remarkably good spirits. After hobbling around, headed over to Eddyline and enjoyed more great food, beer, and company. Nate Willson from Laramie recognized my Pilot Hill t-shirt and we had a good chat about the Laramie race series.

Anyway, thanks for reading. Still some things to work on to perform better but I'll take the improvement and a fun day in the hills, legs held up well without any injuries. Definitely still learning things that will come in handy in Leadville.
Posted by mike_hinterberg at 9:10 AM