The Chilean Hitchhiker, and the Terremoto Race Against Time

J was already in the car, and as I walked towards it, I knew the question.

I had explained to her previously how common hitchhiking was, especially in the rural areas, but I didn't want to push us relying on it to get around. This was different, though. Reluctantly (but also ready to fall asleep), she said "Yes."

I told him my name, Miguel, and asked his. He stiffened, pressed out his chest, and let out a long stream of family names and surnames. Sounded good enough to me, so we headed down the canyon.

"I'm only heading to San Alfonso, though."
"No problema."

So we chatted, and his occasional English was pretty good. Actually, as good or better than my Spanish, I had thought, but he demurred. He didn't think he could survive in the U.S. or other English-speaking country without knowing more English.
"You'd be surprised," I told him, "you can get by pretty well in California."

He had been hiking up in the canyon, and enjoyed doing that on weekends. He lived just outside of the canyon and worked in Santiago, in comunicacion quimica, as we both discovered we had interests in the biological/scientific fields. He asked what we had done in Chile so far and what else we planned to do (I downplayed our imminent departure to Argentina). He said we had seen most of the highlights in Santiago itself. I said we were headed to the coast for a day-trip, we were thinking of Valparaiso.

"I don't recommend it, it's even more peligroso than Santiago." Instead, he recommended the town of Maitencillo. Desafortunadamente it was 2.5 hours from Santiago, and we didn't make it there, but it was a solid recommendation. (And we did make it to Valparaiso...which wasn't that great).

I asked, and he told me, about some of the mining features, rivers, and small towns as we headed down the canyon. He asked if we had heard about the miners, and I told him how much of the U.S. was riveted by the television coverage of the rescue, even though it was the middle of the night. He also asked if I had heard about the earthquake (terremoto) the week before, and something else clicked in his mind.

"What have you had to drink in Chile?"

I told him about different wines, and visiting Concha y Toro, and how we really enjoyed the great wine which would have been much more expensive in the U.S., in addition to different beers I had tried.

I don't remember what his actual answer was, but he insisted I had to have one. I asked if they would have it up in the canyon, but he said I would only be able to find it in the city...but that I had to try it.

Soon enough, we were near our lodge, where I dropped him off and we wished each other buen viaje.

The next day was to be our last full day in Chile. We returned the rental car in Santiago, and took an hourlong bus ride to Valparaiso. Although I know we could have headed further up the coast for better beaches and surfing, the fact that we spent time in the mountains precluded us from doing so. This way, we at least got to see the ocean, but with an uninspiring backdrop of a faded city (despite being a UNESCO World Heritage Site) under a grey sky.

However, we did get to appreciate how all that cheap fruit gets to U.S. grocery stores: 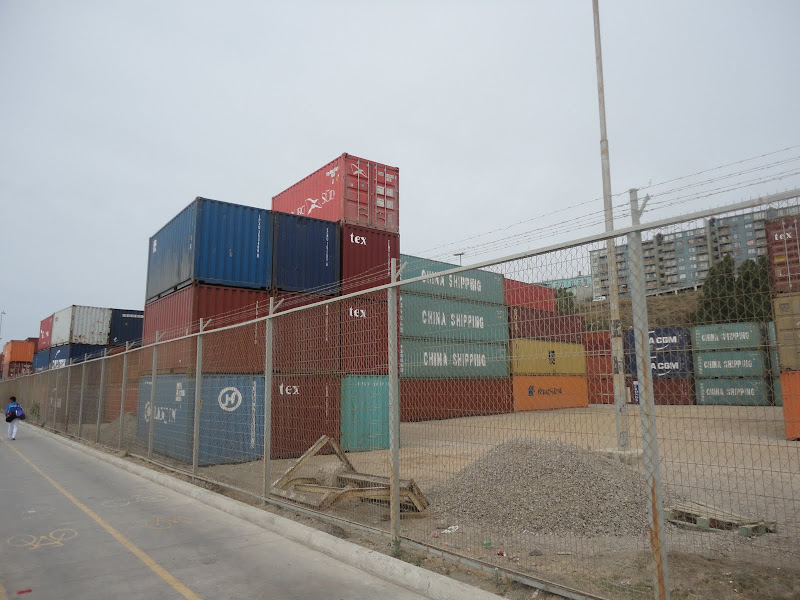 By the time we returned, we only had a few hours left for our last evening in Santiago. We headed back to Providencia, and again enjoyed a long meal with wine. Before we knew it, it was 11:30PM, and things were starting to slow down, despite guidebook assurances that things are hopping late pretty much every night.

It was then I remembered the terremoto.
"No, sorry, we don't have them here."
I asked who might have them. He gave vague answers about general areas where I could go manana.
"Pero es mi ultima noche en Santiago y my amigo dice que necesito que beber un terremoto!" Somehow my desperation mixed with inebriation, and this all made sense.

"Ah!", he replied, "there is a place close by, I think." He went inside, then returned with directions. "Yes, just go down here a few blocks, and on the corner..."

I thanked him, and we headed to that bar. They were closing up, too, and picking up chairs from the patio.
"Sorry, we're closing soon, so we don't have dinner anymore."
"Do you have terremoto?" I asked him.
"Sorry, maybe tomorrow...we don't have helado..." (I didn't know how ice cream was related to this).
"Pero es mi ultima noche en Santiago y my amigo dice que necesito que beber un terremoto!"

He perked up, told us to wait, and headed inside. Just a few minutes later, he came back with a distinct concoction, which he placed on the table proudly.
"Un terremoto!"

He told us what was in it: Pineapple ice cream, white wine, and Jager(!). (Looking online since returning, it seems that the Jager was a unique twist).

J and I shared it: it was otherwise a smooth, sweet cocktail, that would have been more appropriate mid-day, but it was nice to finish the quest nonetheless.

I thanked -- and tipped -- him profusely, glad to get one last taste of Santiago before heading over to Argentina.
Posted by mike_hinterberg at 6:13 PM