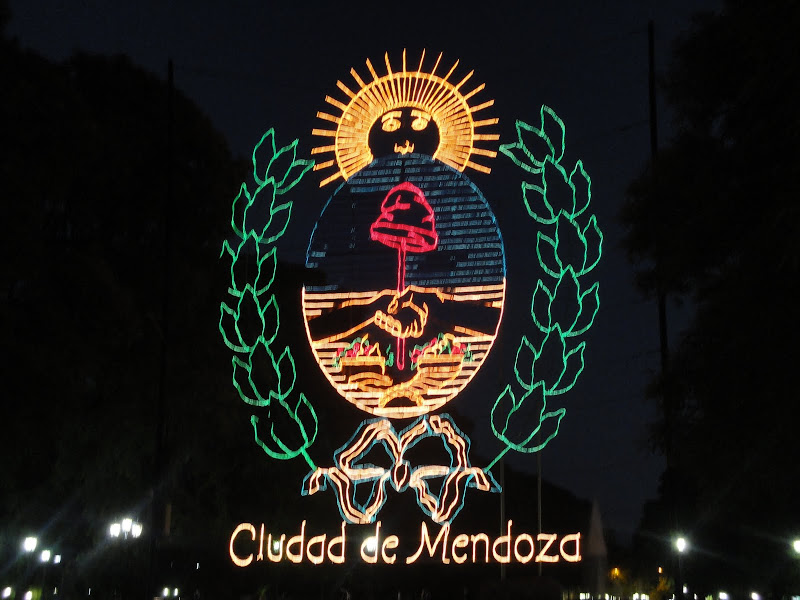 After the fabulous bus ride across the Andes, we arrived in Mendoza, Argentina, mid-afternoon, on the southeast edge of town. Mendoza itself is a growing city smack in the middle of the famous wine country in the rain shadow east of the Andes.

I had arranged lodging in the Maipu region of wine country for the next few days, but we wanted at least a couple days to explore the city itself before heading off to the vineyards. Since we decided to spend a day here, we needed to find lodging for the night.

Wandering around aimlessly in the heat, with our backpacks on, looking for lodging, is not Jessica's favourite game -- I've learned that one before! On the map, Mendoza looked easy enough to navigate. It has some parallels to Ft. Collins, being a flat, compact city with foothills to the West; and a population in the low 100k's as a center of other surrounding populated areas.

We were approached immediately when arriving by a middle-aged, chain-smoking woman representing Hostel Suites Mendoza, with pictures in a binder. The deal was that you'd get free transportation there and then you'd get a room. It would be convenient, and the price seemed right at $40 for a private room, but risky to commit without seeing it in person, so I memorized the address and thought we could walk that general direction.

First, thought, I went to stop at an ATM in the bus station, only to find out it wasn't working. Same thing with the other one in the station. No Argentinian pesos on my person yet, but I figured I'd find one later.

I must have chosen poorly on our route toward the center of town, as I didn't find too many hostels, including one listed in our guidebook that didn't exist at that location.
So we did find ourselves at the Hostel Suites Mendoza anyway -- and saw a few other options nearby. We checked out Hostel Suites first.

It seemed decent enough, and it would be better than wasting more time looking around, so we decided to go with it. Unfortunately, as is often the case with hostels such as this, the relative inability of the friendly but youthful staff to rationally multi-task or efficiently service customers meant that we took 45-50 minutes just for this process.

One benefit of this hostel was free internet via wireless or 4 computers, which would have been nice to use while waiting. Typical public computer etiquette -- often this is posted -- is 10 minutes while people are waiting. Instead, a coven of 4 girls refreshed their Facebook pages and sent inane messages to their friends.

I haven't used Facebook since November, but this experience was an added reason. (Digression: We had also just seen "The Social Network" on the plane for the first time, and I also hated Facebook even more after watching that, mostly because of all the hype about the movie, which already had me thinking about how the reason people liked it is mostly because they like Facebook and feel apart of it, so they feel like it's a movie about them, which is the biggest experiment in social solipsism in history.

We weren't the oldest clientele by far, but between my frustration at the staff as well as youth in general (remember, there's a timeshift abroad where our 21-year olds are their 18-year olds), at that moment I officially felt old.

And I'm OK with that.

While waiting, I asked where the nearest ATM was, since foreign currency and credit cards (though accepted) had an extra charge. Plus, I like to minimize the potential for funny business and/or incompetence when it comes to credit card usage abroad.

I found out there was a bank of ATMs 4-5 blocks away, so I left J with the bags and ran out to get cash. I saw a couple of banks with lines of people, strangely, but found an ATM and cursed the uniform surcharge (~4.50/transaction, regardless of amount) while getting cash.

I arrived back at the Hostel with no apparent progress, but eventually we were able to check in.

Our room was modestly small, but had an air conditioner, as well as the space-saving, coveted bidet-shower combo (All Things Clean, All At Once!) 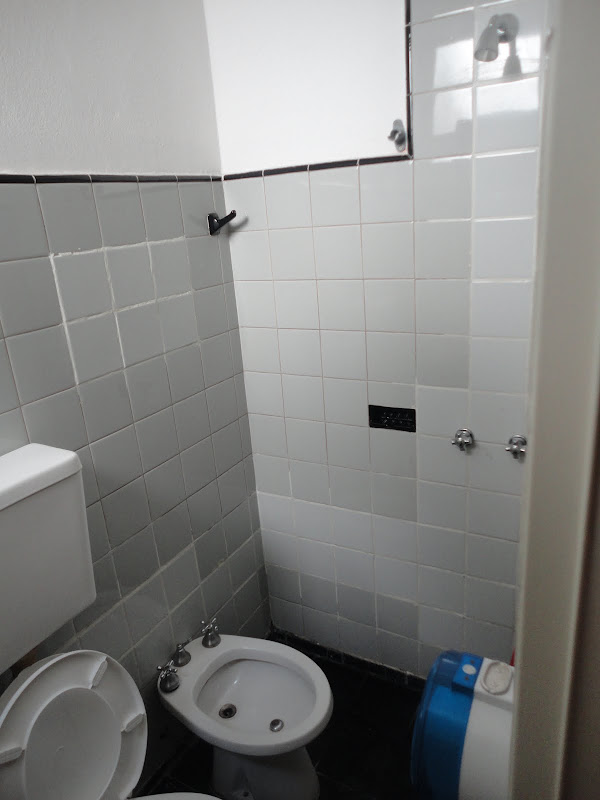 With a load off our backs, we were finally able to go out exploring.

Argentina generally, and Mendoza specifically, has a historic Italian influence via immigration. Interestingly, you can here slight affects of Italian in the spoken language itself. But that also meant there were fabulous opportunities for pizza and ice cream, in addition to wine and beer: 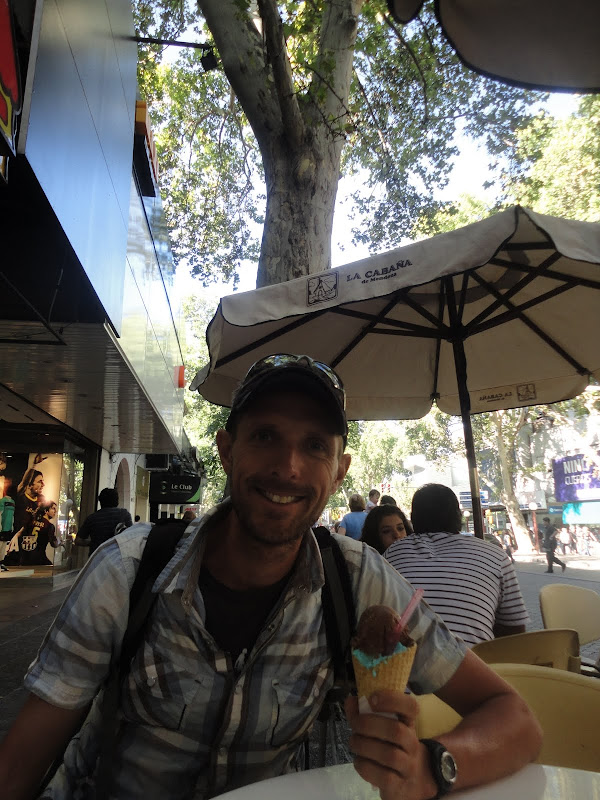 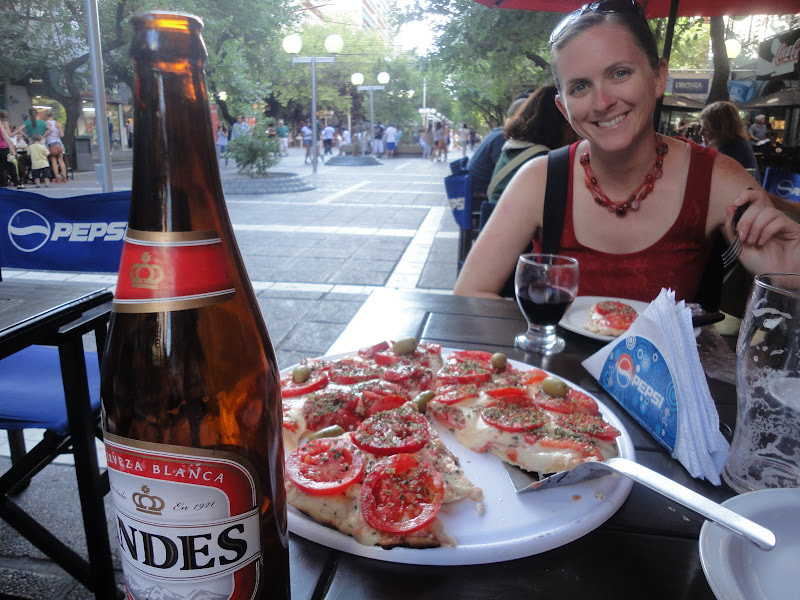 Along Paseo Sarmiento, like many other parts of town, you can't go wrong with pizza at an outdoor cafe

After a lingering meal, we headed further west in the waning daylight through a few parks, to the large Parque General San Martin at the west edge of town. This was a refreshing circuit of crushed gravel and paved paths, trees, and lakes. Lots of folks were out strolling, jogging, or rollerblading, and kids were out playing as well (as common as it is to eat late every night, it is also common for kids to be out playing regularly at 10 or 11pm). 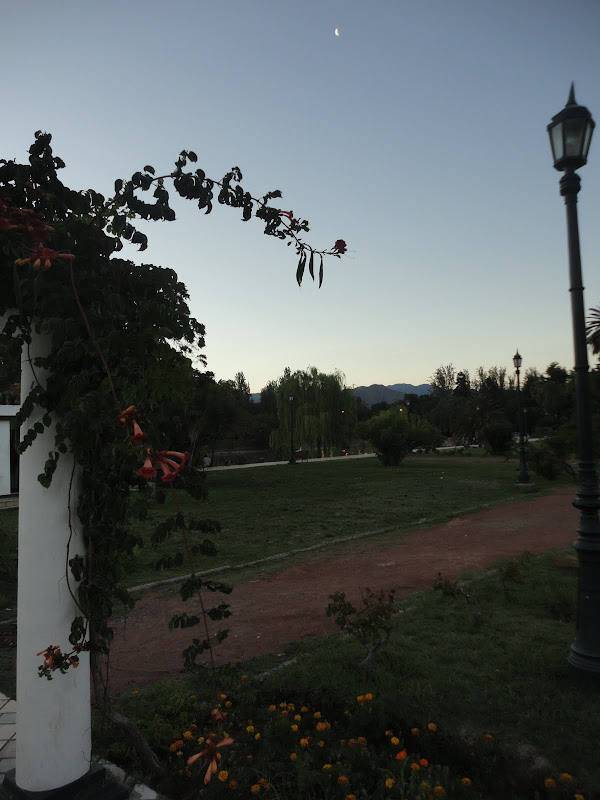 We walked around the park and then headed back at night. There is a significant amount of nightlife in Mendoza, but we didn't explore that. Instead, we had expectedly fitful sleep in our room with various clans of youth heading out, loudly. But, no bed bugs, which is our top request, and the air conditioner did drown out some of the noise.

Morning Run
I finally got up early enough for a morning run. The youth were deathly silent at 8AM! I headed back toward the park, which I read opened at 8:30.

Traffic was lighter, and the sun was still low enough that the leafier trees kept the temperature down.

I enjoyed a flat run on the gravel paths, almost imperceptibly climbing upward as I headed west, and nodded at a few other runners. The trees ended and it was noticeably hotter as I left the western edge of the park, and passed a very cool bike velodrome. I expected to make a loop in the park, but my plans changed when I reached the western edge and saw an obvious nearby cerro poking up toward the sky.

This turned out to be Cerro de la Gloria, which had a twisting road that led to the top with great views and a wicked statue commemorating San Martin himself. There were also different trees and several pools along the way, and great views of the city to the east, and the foothills and Andes to the west. Desafortunadamente, I didn't have my camera with me...

On the way down, I was startled to see some white deer, only to realize that it was the zoo!

The day was quickly becoming hotter, and I had drained my one bottle of water in just over an hour as I came back and woke up J. But I felt significantly better after getting out in the morning.

Now we had that tenuous situation where we wanted to walk around some more during the day, but also check out of the hotel. They had a baggage area downstairs but warned about lack of liability and monitoring. We debated, but J said "You have to trust people to some degree or you can't travel at all" and that was good enough for me. I had a cable lock so it was unlikely that our entire packs would be stolen, but our stinky clothes were technically fair game.

We headed out to a cafe to grab some coffee and light breakfast (the hostel breakfast was coffee-less and didn't look overly appertizing). I still had some cash left over, but was again looking for an ATM, especially since I figured they would be scarcer once we left the city. But the only ones I saw, strangely, had long lines, so we just headed to the cafe.

Picture from the night before: 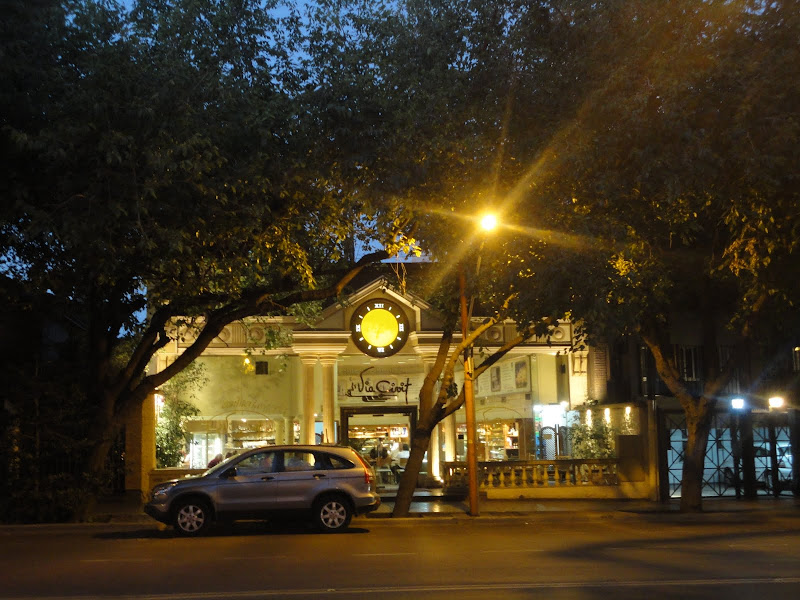 We had very friendly service and some great coffee, and some newspapers were laying around, so I glanced casually. The main section specifically caught my eye, and as I read the article slowly, I was beginning to piece things together.

New money was being reprinted since November and December, but due to printing issues, the government switched from a printer in Chile to one in Brazil. Mainly this affected 100 peso bills (~$25), which are the common denomination in ATMs. The money then has to go to Buenos Aires before being distributed out to Mendoza. This was delayed, so there was a shortage of cash in Mendoza ATM's. Plus, they just had a holiday season in which people withdrew more money than usual. And they have a low limit of 400 pesos/day at most ATMs, coupled with the surcharge, so most people withdraw 400 at a time. Which is, of course, 4 100-peso notes.

There were specific stories of people being unable to get cash for the weekend; some folks getting the wrong denomination; and other people that were traveling and having a hard time getting cash.

That was us. I was low on cash and unsure if I'd be able to get more. (Since I returned, I read that Mendoza has approximately 100 less ATMs than it could/should have based on usage). I also vaguely recalled some sort of Argentinian money crisis earlier in the decade. This was the 2001 riots in which 26 people died, as runaway inflation and other fears led to people withdrawing large sums of cash and perpetuating the cycle.

I didn't want to be overly dramatic, and didn't know if it was overblown in the newspaper, but with another week in Argentina, I didn't know what to expect.

So our next, critical order of business, was to find a bank or ATM.
Posted by mike_hinterberg at 5:38 PM