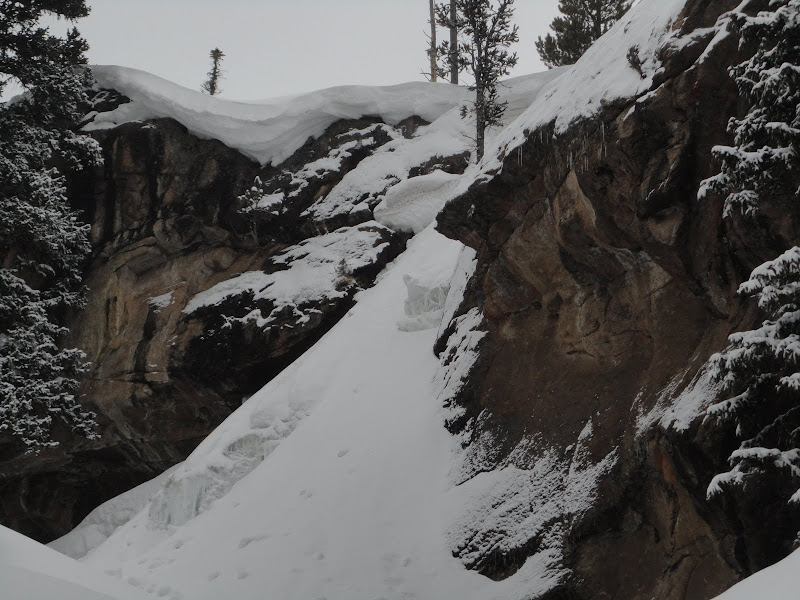 Since we were in town for the long weekend, we looked to get out to the mountains without driving I-70 if possible. Despite fairly common predictions of high wind, we headed out to Wild Basin in RMNP. I've enjoyed the trails there in the winter before, but hadn't taken Jessica there, and hadn't been there in about 3 years. This ended up being a fantastic choice.

Wild Basin is the southern entrance on the east side RMNP, and is relatively lesser-traveled compared to more popular entrances to the north. This should not be so. In the summer, Wild Basin offers less-crowded backpacking destinations to several different alpine lakes, past some minor waterfalls and cascades, as well as some summit assaults on mountains deep within the interior of the park, if not some "sneak" routes of the burly group near Longs to the north. In the winter, it does get windswept, so it's important to check the Snotel readings for sufficient snow: whereas Bear Lake might be "in" in early December or even November, it's usually best to wait another month for Wild Basin to have at least 30 inches. The trails, however, have sufficient tree cover to protect from the wind. Finally, the Wild Basin entrance is usually unofficially unmanned in winter, so if you haven't renewed your RMNP or ATB pass yet, you can get a free visit and remind yourself about "America's Best Idea."

The winter parking lot is past Copeland Lake, on the left side of the often-plowed dirt road, but is still about a mile short of the ranger station and trailhead, so be sure to factor this in to your timing. After parking, proceed an easy, flat mile along the road (usually on ice or thin snow) to the TH, which has a ranger station, open restrooms, and a Warming Hut in the winter, rumoured to be stocked with hot chocolate and coffee. (The "Warming Hut" on this day was said to be open, and a sign said it was 500 feet behind the restrooms, but when I proceeded to an obvious cabin and a small shack 500 feet behind the restrooms, I found it to be locked. I did not explore the Ranger Station, also approximately 500 feet from said sign, thinking that the sign would have just said "Warming Hut/Ranger Station," but with subsequent confusing research since returning...I still don't know. But sounds like fun!)

Finch Lake
Alternatively, about a quarter mile before the ranger station is the Finch Lake TH, which has a trail that begins switchbacking in earnest on a rockier trail. I recall exploring this option and finding some good snow in sun-exposed aspen groves, and ultimately a scout camp complex, before abandoning that route in a mish-mash of social trails that didn't follow any obvious landmarks. So this is a good option for variety, but requires more route-finding and trailbreaking.

Wild Basin TH
At the Wild Basin TH, you now begin to follow the St. Vrain drainage. This trail is well-marked and usually well-trodden at least to Ouzel Falls, which is 2.7 miles. Unless there is a recent snowfall, traction such as microspikes or yaktrax would often be sufficient on the packed snow of the trail, making this a viable trail-running option. Continuing on the trail, you will pass Copeland Falls, and ultimately a bridge at Calypso Cascades. Both features in winter are reduced to trickles of water underneath ice and deep snow drifts.

The trail is a slight, even grade up to the bridge at Calypso Cascades. After this, the trail starts climbing in earnest on the way up to Ouzel Falls. Scenic views start to open up in this area, scarred by fires decades ago. (And on clear days, you will be able to see more of the higher peaks).

The corners are tighter after Calypso Cascades for skiers, but with good snow, everything is manageable with sufficient skill and caution. In fact, the downhill from Ouzel Falls to Calypso Cascades can be a downright exhilarating bobsled run! Just be sure to have visibility, caution, and pity on the snowshoers, who are not accustomed to reacting to anything other than the immediate desire to take a snack break right in the middle of the trail around blind corners. (Just kidding! Kinda).

Finally, Ouzel Falls itself is nothing more than a frozen chunk of ice and snow in the winter (shown in first picture), resembling nothing of it's summer intensity. (In fact, I have not yet seen it in summer).

We turned around here, but one can continue to a fork which leads to Ouzel and Bluebird Lake; or ultimately to Thunder Lake. These options increase the chance of trailbreaking in deep snow, and other parties on this day had turned around in a myriad of social trails in the rocky terrain above the falls. I previously had made it to Thunder Lake after much effort, but was unable to enjoy the scenic views in a snowstorm and having taken longer than I expected to break trail, so I would recommend further destinations only with an early start on bluebird Spring days.

As it was, we had a mixture of just a bit of sun but mostly light snow and clouds, but the clouds and cooler temperatures kept the snow absolutely perfect for skiing in both directions. 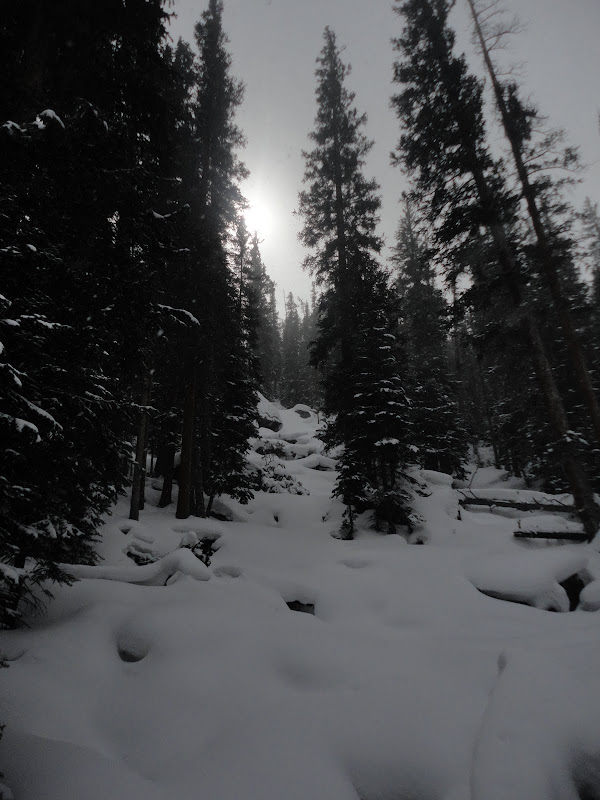 Although Ouzel Falls itself wasn't entirely impressive in the winter, J enjoyed all of the views and mixture of terrain, which ended up being her longest snowshoe outing by mileage. Luckily, near the TH, there was an igloo ready for her to take a break! 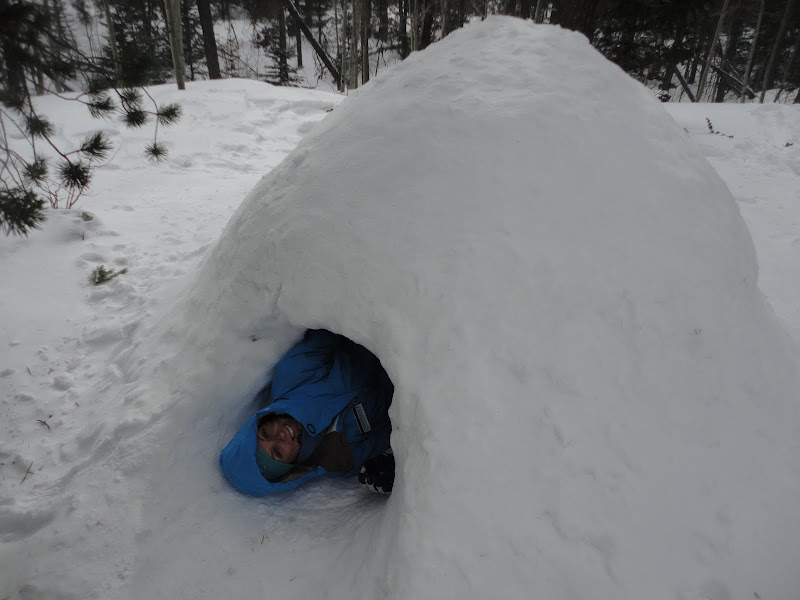 Posted by mike_hinterberg at 11:37 AM