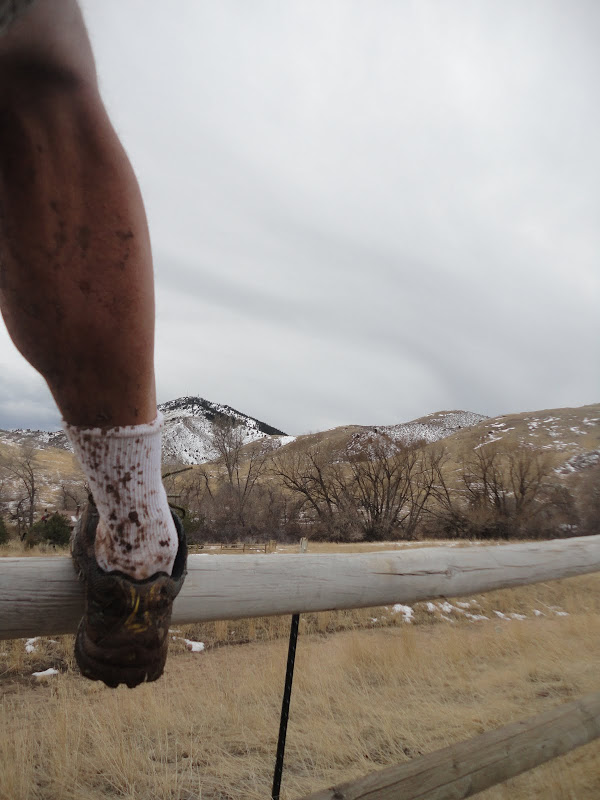 After some deliberation, got out early Saturday afternoon for trail running near Red Rocks. This is a fairly common loop, though I've seen a disparity and confusion on mileage and elevation, but I think the above estimate is accurate if not conservative.

The attraction was getting to trails with only a half hour drive (still hate driving to run), but I was worried about crowds enjoying the nice weather. The crowds were there compared to what I'm used to, but quite manageable at this time of year. And once I started moving on the trail, my mood improved considerably, and of the folks that were there, I enjoyed brief chats, waving to kids, and playing toss with a dog that brought a branch to my feet (guess I looked like I wanted to play).

I decided to start from the Matthews/Winters and do a counterclockwise loop, followed by a clockwise loop. It was warm enough that I enjoyed the luxury of stopping at the car mid-run to take a swig of water and ditch the shirt. 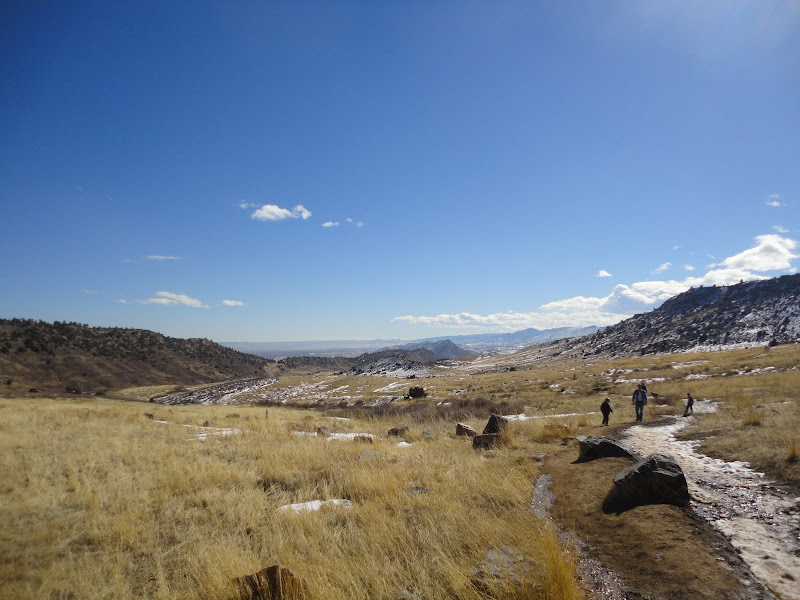 Beginning with the clockwise run, after a short, flat, rolling section, that trail dipped and climbed into shaded switchbacks, a nice section of roller coaster through the snow. Without traction, I definitely had to focus on short, choppy steps on the hilly sections. After this, there's an option to continue on the Red Rocks trail, or take the Morrison Slide option instead, which is ~0.4 miles longer and also climbs more. Easy choice, as the Morrison Slide trail has a fun climb up to a gorgeous, broad plateau. I definitely enjoyed the scenery here as much as any foothills trail, especially being able to look out at the rolling ridges of Green Mountain. I like being on top of stuff and looking at other stuff I've been on top of, even in the foothills.

Next comes the downhill that you earned, again on switchbacks, which is just barely technical enough to make you pay attention but mostly a fairly clean descent. At the bottom, you're back to roads for a bit, or you can loop back on the Red Rocks trail and stay within Matthews/Winters. Otherwise, the signs help guide you to follow the Red Rocks trail further, a couple more road crossings, to Dakota Ridge.

The Dakota Ridge section is just over a couple miles, but is an entirely different world of rocky, technical climbing, with some landscaped stairs that ended up forming a ramp of solid ice in the winter. At the top, the rolling climbs keep continuing, with some off-camber slabs and rocks that force you to pay attention. (Reminds me of some sections of Devil's Backbone). Despite having views of civilization, it's still a nice perch. Of the folks that weren't walking up here with dogs, many of the rest were walking with mountain bikes instead.

Finally, the descent back down to Matthews/Winters is a less-technical blast down switchbacks (I overran a couple switchbacks, not because of speed, but because many other people have overrun them so the trail generally continues a few feet past each corner), which leads back to Hwy 93 across from the parking lot.

These trails give a good selection of whatever-you're-in-the-mood-for. Both parks allow mountain biking as well as hiking. It's a great loop, but sort of an odd one for mountain biking (though it seems to be popular to do both), since there's so much disparity in the technical nature on either side of the road. I wouldn't consider it a destination mt. biking area unless you lived nearby, or were a technical perfectionist that wanted to clean all of Dakota Ridge. But the interior park roads are also quite nice and had a decent number of cyclists on them, so I could imagine a fun day for many riders could include some road miles as well.

I was quite happy with an early season snow and mud romp. I bet I encountered much less mt. bikers than I would in just a few months, especially since the mud in Matthews/Winters was utterly unrideable. As for the loop, I enjoyed both directions for different reasons, but was surprised on the return clockwise trip, when I saw impressive, glowing red rock formations that somehow I completely missed on the way out (daylight/sun angle also had an effect there). Predictably, the shady areas of the descent on Morrison Slide were really slick and sloppy on the way back.

Finally, when I saw another runner in the parking lot, I asked him,
"Do you think we'll get in trouble for being dirty?"
Posted by mike_hinterberg at 10:43 PM