Enjoyed a talk at the Rio from Dom Nozzi last night.

Definitely enjoyed what he had to say, and learned some things. In urban planning, of course, due to all the tradeoffs involved, there is much opinion. There is also much data available for comparative purposes on street design. I wrote/remembered some down, I'll have to dig it up, or leave it to the user. Some highlights:

1. Narrower streets reduce traffic accidents and speeds.
2. Wider roads have partially been driven by demand for faster fire/EMS response, especially with larger fire apparati. It has been suggested, and implemented in various cities in the US and Europe, to consider the size of purchased fire trucks so as not to artificially create the spiral of needing/wanting bigger roads. Nozzi's suggestion is also to increase interconnectedness of roads -- ironically, we build big, wide roads, and then end them in dead ends and cul-de-sacs.

Ironically, he also mentioned, in the context of political will, the tough argument of EMS response: the 'burning baby in a building.' The irony is that slightly faster fire response, real or perceived, pales in comparison to the danger of increased traffic accidents.

3. "Attentive" vs. "Forgiving" streets
Nozzi argues, with quoted support and data from other studies and planners, that designing wide, straight streets promotes inattentive driving (the cause of 80% of vehicle accidents). There was a great quote from a Dutch traffic engineer about promoting 'idiotic behavior'

4. "The High Cost of Free Parking" -- it's a whole topic and book upon itself, but it touches on how cities/downtowns enter a vicious cycle of promoting driving/reducing biking and walking because of ample free parking -- which comes at an economic, enviromental, and quality-of-living-cost 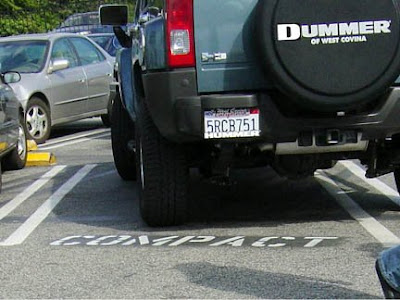 5. Biking/walking is best promoted by a "herd" and familiarity. Nozzi had a prioritized list of what he thought would best promote transportation. He had interesting arguments about putting bike lanes low on the list, because if roads were designed appropriately for safe, mixed used (lower speeds in dense areas, better lines of sight, etc.), and people are out there cycling/walking, drivers will be more attentive to them. Another aspect of familiarity is having more 'normal', everyday people out there riding: women, businessmen, etc.
Posted by mike_hinterberg at 9:12 AM