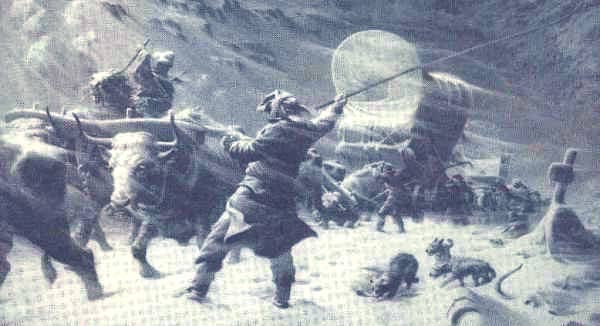 I first read about the Donner Party in middle school, courtesy of Stephen King's "The Shining," and was captivated by the story: a party of pioneers basically caught in a horrible winter in the Sierras, where some of them ultimately resorted to cannibalism for survival. Mostly, that story conjured up images of deep snow in high mountains, something I had never seen, in a land called California which I had also never seen.

Fast-forward to 2006, when I was fortunate enough to live in California for 4 years, spent some time (but not enough) in the Sierras, before heading to Colorado. First thing to do in my new home? Stare at open spaces on maps. One thing jumped out at me to the West of Fort Collins:

I knew I had to check it out sometime. There's not much beta out there on it -- local mtb blogger Kerkove had a brief mention of it -- and I similarly envisioned going on a mt. bike trek there eventually. But it's in a weird spot -- it holds snow forever in the trees, and by the time it melts out, I'd usually prefer to drive further to get above treeline. (The pass itself is at 10k feet, and surrounded by trees). So I hadn't been there yet.

So today, I couldn't make up my mind on where to go -- was thinking about driving to Cameron Pass -- but slept in until 7, didn't get ready until 8:30, and decided to just go for a duathlon and get some time outside. Depending on how things went, I could go all the way North to Buckhorn, or add a short jaunt up Lookout Mountain, just as long as the whole section took around 4 hours. But, things didn't work out that well!

I made the hot, uneventful bike ride down to Loveland and up the canyon. Nothing too blazing fast, but nice to know I can hop on the bike whenever I want and feel like I can ride as far as I want, without having ridden much in months. (With one exception: my shoes/cleats continue to push on a nerve in my foot, so I need to fix that before doing longer riding). Now, one of my maps shoes dirt coming all the way down to the Devil's Gulch Hwy, but it turns out those are all private roads. Truly, the public south TH requires going up to Dunraven, no shortcuts. That means grinding a road bike up 2.5 miles on a steady dirt grade in the heat, which is a kick right before you start running.

I locked up by bike and got ready to head up Bulwark -- I could have ridden another 0.4 miles or so up to where the actual trail forks off. Now, I tried something else new which didn't work out so well -- I brought my full Go Lite day-pack with 3 bottles of water, a filter and pump, food, and some bike equipment, which weighed over 15 pounds. Previously, I've gone lighter by bringing 2 smaller packs, and leaving one pack with bike gear tied to the bike. That's worked well in the past, and I'll go back to that system. Since I've been feeling good while hiking with the bigger pack, I thought I'd just be able to take the extra weight, but it really slowed me down.

Oh, you might think the water system is overkill, too, but there's no water at the TH, so rather than finish a run/hike with more cold water (or beer) in the car, I need to make sure I have enough to keep on riding. So you gotta bring more than usual.

Anyway, I headed up the short road section, then the trail section toward the Indian Trail. This was a steep but steady grade for the first mile. At the top, by the Signal Mt. junction, I saw a woman waiting for someone, and some forest workers cutting some dead trees. These were the only other people I saw all day -- this is not a popular trail.

I did, however, kick a chipmunk for the first time in my life. Not on purpose, mind you: I was trudging slowly uphill, and a chipmunk freaked out and darted across my path. As I took a step, he ran in front of me and bounced off of the top of my shoe, before scurrying away.

Now, down the Indian Trail -- steep, loose, rocky, rooted, stumpy switchbacks. I couldn't run that fast with my big pack, and was afraid of twisting an ankle in the middle of nowhere, so I took it easy. At the bottom, I reached the junction of the Miller Fork trail and river. I filled up a water bottle and crossed the river in a few tricky spots only to find dead ends, as I assumed the 'real' trail crossed the river while social trails went further down to find easier crossing. As it turns out, the most well-beaten trail is the real one, duh! You don't cross the river immediately, you just go alone it before hitting a log bridge.

Now some more climbing, and occasional meadows and wildflowers. More rocky switchbacks, and one corner with an open view to RMNP. (Sorry kids, you and your fancy graphics, no camera -- when I was your age, I played a few completely text-based computer games with NO graphics on the Commodore 64!) I had a bit of cell coverage here, which wasn't true at the TH, so I gave J an update. Through another meadow, and I heard some sort of grunting noise, but didn't stick around to see who was making it. Now, some more rocky uphill through a steep, wooded hill. I was not making good time, and I was basically hiking the whole way. I was disappointed in not being able to run more, but with the heavy pack and bike ride, I won't chalk it up to too much as long as my other runs go decently. The only good sign is that I feel like I can hike quickly all day with a pack, maybe not a surprise if I've been doing that at least one day most weekends.

Finally, after more than 2 hours, and hopping some deadfall, I reached Donner Pass. (By the way, the mileage marker from here says 6 miles, whereas it was 5 miles, added up, from the other direction). With the late start, understandably, weather was coming in, and I heard my first thunder. This, and the time, ruled out any further options for the day. Took a quick break then headed down the hill.

I was able to jog on the early uphill and flats, but nothing earth-shattering. On the way up, I noticed a rivulet path that cut straight across the switchbacks, so I took that down instead, cut through some trees, and was happy that it all worked out when I hit the trail again. This section reminded me of what I've read about the Barkley -- basically, you're humping up and and down forested hills without much feedback on progress. Hardrock seems much more satisfying to me since you can see where you're going and where you've been -- the mindset of rolling through hills that look the same seems like a tough mental challenge in itself!

Filled the bottles again and explored a small mine/cave by the Miller Fork, before the final grunt back up the dreaded Indian Trail. Finally popped out after 4 hours of hiking, water-filtering, exploring, and other monkey business.

Saw a guy (Brett) and woman when I popped out, luckily I was running in good form. He asked where I went, and said, "Let me guess, that's your bike down there, too?" He was impressed by the roundtrip which made me feel good, and asked if I had done Round/Sheep, and told him I did that one as a Duathlon, too, but should like to return for a proper TT some day. Anyway, nice seeing them, and more clouds rolled in.

At the bike -- flat rear! First duathlon where I had a flat from parking. Otherwise bike, helmet, and shoes were undisturbed. Put in a new tube and coasted slowly down Dunraven Glade Rd -- last time, I nearly wiped out going >30mph in the last corner when it changed from hardpack to looser gravel. Also kept feeling my rims for overheating and checking the pads. Finally back to pavement, able to coast home. Chased by a storm, but it was mostly swirling to the north.

With food stops and everything, I was out there around 10 hours. Disappointed in the run distance, as last year I did over 20 miles from the same TH up to Stormy Peaks, on the North Fork trail, which was much more runnable. However, I do feel better mentally for a 100. The duathlons are nice because you break things into thirds, or even quarters if you consider the out-and-back of the run. At no point do I think about how much time is left, just about where I'm going. If I'm tired, usually I can drink/eat more and feel better quickly. Once I hit the bike, I think I'm home free/easy sailing, even though I've got ~2.5-3 hours to go. I need to keep that mindset in a hundred -- get the first 2/3rds done, and trust that my legs will bring me back.

But, this isn't supposed to be a pure training blog so much as it is trail beta...
Several sections of this route were tougher than I needed for pure distance, 18-20% grades according to mapmyrun.com.

How about mt. biking? After the initial 2 miles from the South, some of the singletrack was sweet enough, and the technical sections were manageable enough, that it would be a fun ride. I would investigate out and backs or loops from the North, as hike-a-bikes in the south section would kill your flow. You could probably build some sweet illegal trails and obstacles in the hill below the pass -- I'm not into that sort of thing, but it just looked like a place where somebody would so somethign like that.

Lastly, my overall ride there and back was utterly uneventful. No close calls or harrassment from other drivers, people are doing really well with the 3-foot passing rule. Nearly unprecedented. Amazing!
Posted by mike_hinterberg at 9:41 AM