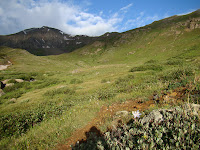 Grizzly Gulch Basin and American Basin are two of the prettiest places in the state, with a gorgeous but laid back mountain, Handies Peak, separating them. While the easy way is to drive a car up to the American Basin TH, the most scenery-packed way is to hike up Grizzly Gulch, and down American Basin. I would also suggest going in this exact direction, for several reasons.

First, the view of Handies from Grizzly Gulch is more splendid. 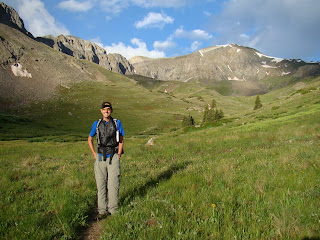 That is, the East Face presents itself as more impressive, while the western route sneaks through a blocked view that doesn't properly present a 14000 foot mountain.

Also, the route along the East Face takes a nifty direction onto a grassy bench before the summit ridge, before rising up along talus to the ridge itself. This exploitation of the surrounding area is better appreciated when going up, and the only touch of Class 2 on this route -- the summit ridge -- is certainly easier when going up.

Finally, this clockwise direction puts the Cinammon Pass road section at the end of your journey, where you're sufficiently protected below treeline and with some vehicle traffic in case of a weather emergency.

In sum, I hope I have sold this route as a fun loop alternative to the more common standard peakbagging route from the American Basin TH, which involves more driving, misses the beauty of the Grizzly Gulch side, and doesn't even yield a minimally satisfying 3000 feet of climbing.


Anyway, J and I found easy, free camping on a Friday night at the Grizzly Gulch TH, just past the restroom and old cabin, complete with a firepit. We got to this TH just fine with our trusty stock 4-cylinder Outback. There were a fair number of other tents, but it was sufficiently quiet, and we slept well.

I should mention, in the way up, we stopped at a Starbucks for the first time in months, and they had coupons for their new-ish instant coffee. I forgot to pack coffee, so this was a fortuitous development for my caffeine addiction. I got up early and made some coffee and oatmeal. Hungrily, I ate a couple packs of oatmeal, and half of Jess's, who didn't have as much of an appetite (poor girl). As you might imagine, this came back to haunt me...

6AM, we headed up the trail, with gorgeous views of Redcloud behind us. 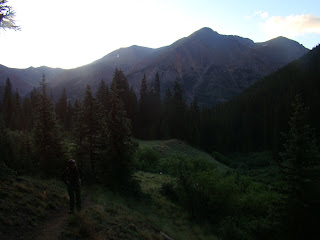 This being the first week of July, we enjoyed some early blooming of wildflowers and general verdancy, though not yet near the wildflower peak. 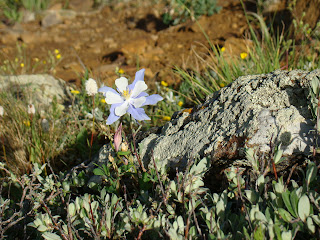 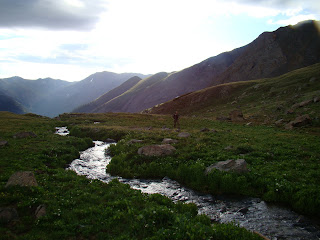 We kept our eye out for some weather disturbances brought all the way out from remnants of hurricane Alex. Clouds formed and moved swiftly over the Peak, but nothing got pushed high enough to become threatening. We followed the clear and obvious trail above treeline, into the basin, before hooking right/North around a rise before heading up. BTW, Roach refers to going "off trail" at this point, suggesting the trail dead-ends at a lake, but at this time, the most obvious trail is the trail to the summit.

We encountered maybe 3-4 parties total on the way up, either taking a break or visible (or audible) in front of us.

Then, the summit was achieved: 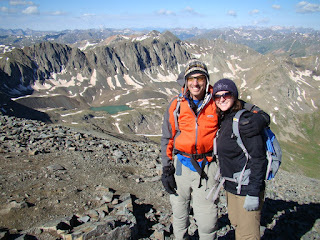 With a belated nod to Canada Day (July 1), I slaked my thirst as a veritable Bizarro Brownie: 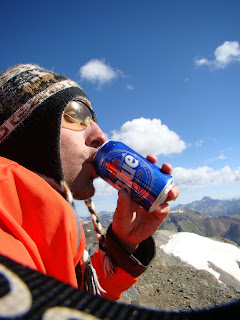 After lingering on the summit for a half hour or so, with a rotation of up to 6 others, we headed down to enjoy American Basin and the lakes below. 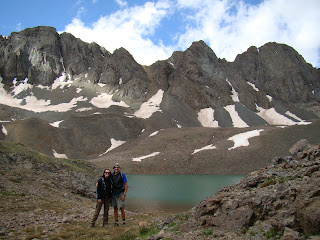 This trail was well-maintained, easily runnable, but more crowded. I enjoyed running down sections while waiting for J. However, my stomach was beginning to hurt, badly, enough that I removed my camera from my neck so it didn't press against my stomach. I needed a bathroom, and secretly hoped there was one at the American Basin TH. But I still enjoyed the scenery, of budding wildflowers, sheer rock walls, waterfalls, and streams. 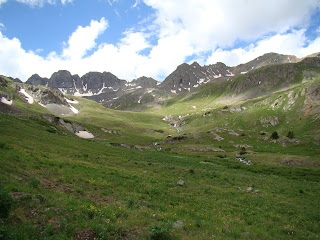 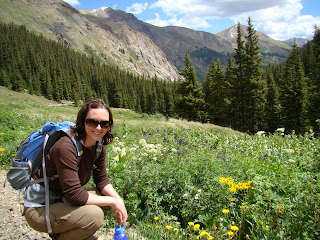 Finally, we made it to the TH, but no bathroom, so I ventured into the woods, and returned a new man, feeling much better! I was able to enjoy the rest of the hike. We had a few drops but no threat of storms. Many 4-wheelers and various motorized folks went by, obviously having rented something from some local "adventure" company, but I couldn't help but think about what they were missing.

Anyway, made our way back to camp, enjoying a nice loop hike. Definitely a recommended route in a beautiful area! The only regret was staring at the gorgeous Redcloud Peak for an hour or so as we walked down the road...such a beautiful area, where we'll definitely be back!
Posted by mike_hinterberg at 7:40 PM