Snow had been a scarce commodity so far, but after another storm (and a few days for things to settle), the balance of enough-snow and avalanche conditions were more promising (moderate above treeline).  The first day of winter, I was eager to try a new but classic ski tour with some downhill turns, up along the old "lost" Rock Creek Ski area.

If conditions were favourable, instead of gaining the ridge of the old ski area, I would instead aim for a new-to-me summit: St. Vrain Mountain, on the border of RMNP and Indian Peaks.
The East Face of St. Vrain is a mellow-angle tour, with lines around 30 degrees at the top (I used hillmap to check this out), in addition to glades along the way. 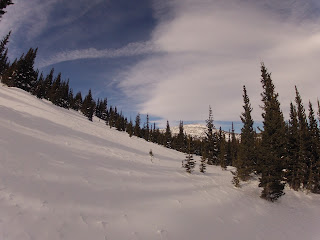 I pressed on toward treeline, to be greeted by howling winds.  These winds scoured the plateau below the St. Vrain summit ridge, and packed and sastrugified the snow.  Not ideal powder conditions, but at least the East Face was completely covered.  Onward. 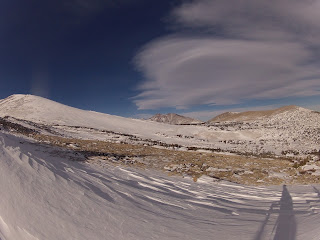 After a few false summits, I eventually ran out of snow and had a few hundred feet of rocks.  I carried my skis a bit in case there was more snow at the summit (there wasn't), but the wind pitched me sideways as I navigated wobbly talus on plastic boots.  I gave up that effort and stashed the skis so as to claim the very windy summit. 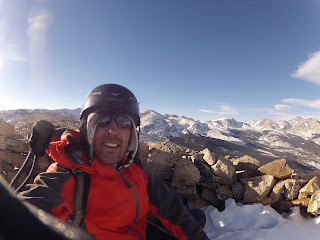 I ducked in the shelter of a summit rock wall, which was just big enough to keep my head out of the jet stream, as I took in familiar, surrounding peaks.  I layered up with everything I had and made it back down to my skis, sliding down tentatively at first as I tried to dig into the hard snow, but eventually enjoying more turns as the slope ran out.

I picked my way over the thin snow and back into the trees, enjoying turns some more. 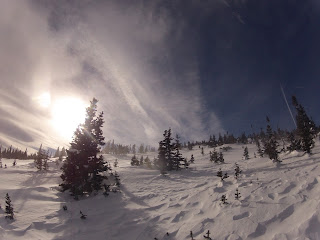 Lower down, the snow was great in the trees, but I didn't want to take too much risk on a solo effort, so I mostly traversed through the forest, waiting to pop out on the Ski Road approach.
I felt temporarily misplaced for about 15-20 minutes, wishing I had just stuck to the road, but soon enough ended up right back on it.  Although the skin up didn't feel all that steep, the ride down was actually pretty fun.

All in all, this is a great tour for skinning to a summit, checking out the old ski area runs, or just XC skiing on the NFS roads.
Posted by mike_hinterberg at 8:28 PM