This year's second Winter Ralleye series ride took us up and over Pennock Pass, over 9000 feet above sea level and 4000 feet above town.  I'd never ridden it before, so was delighted to join around a couple dozen hardy souls for a long day in short daylight. 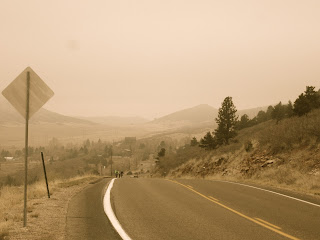 I enjoyed brief chats with old and new friends on the Spring Creek trail, before separating a bit climbing up the dams
As in other rides, there was quite the mix of bikes.  Despite the foggy morning and cool, damp weather, the conditions were actually promising for this ride at this time of year, with only a trace of packed snow at the upper reaches of Pennock Pass.

With all of the pavement, cross and touring bikes were still the best bet.  I'm even more motivated to cross-ify one of the bikes in my garage, just a few parts short, and I need to move some racks around between bikes.  Instead, I went with knobbies again, and a heavy backpack full of warm clothes, making myself work a bit harder to keep pace. 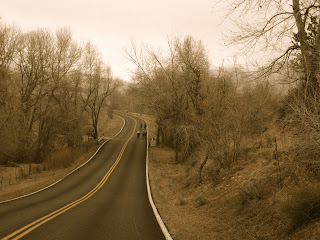 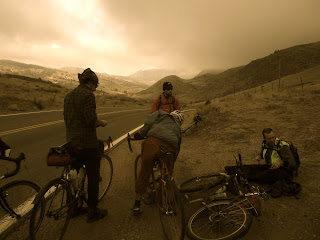 We chased the sun for a bit, but never fully warmed up. 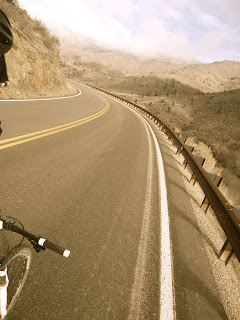 Eventually, we turned West, and began the long climb up to Pennock.  It's steady until a few switchbacks at the end. 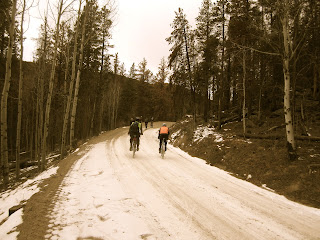 Feeling steady but just about bonky, I was glad to have the extra piece of birthday cake that I saved from the party the night before.  I regrettably wasn't too social, as I was feeling a bit worked from the ride and the cold.
We lingered a bit at the top, but blustery wind encouraged us to descend -- after putting on every layer we brought with us. 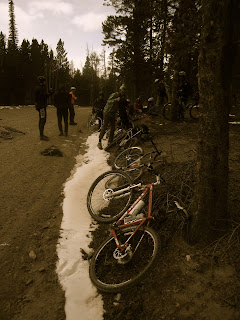 The descent down Pingree Park Road was a sustained and enjoyable break from pedaling, and the warmer temperatures towards the bottom were a nice change from the chattering and shivering up top.

Despite the damage from the High Park fire, the views were still inspiring. 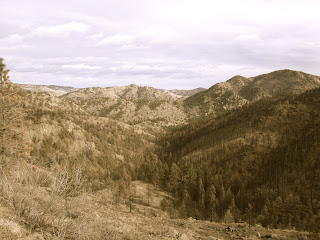 We split into smaller, disorganized groups for the descent down the canyon, and I worked fairly hard to keep in line with other riders, knowing that pedaling by myself would both be more lonely and a significantly harder effort.  But I seem to have recovered and was able to pedal more strongly and take some pulls.  Even if a bit uneven, I love working in a paceline, and that's a dynamic that can't exactly be replicated in running.

We took one final break at the Mish: 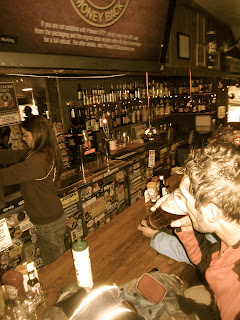 I followed another small group out before splitting up and heading home, just needing the small blinky light on front for the last half hour or so.

Another great ride that beat me up, though I felt a bit stronger than last month, being my longest mt. bike ride ever, and my longest ride since January, 2011 (almost 2 years ago).  Ironically, that meant I just snuck in a century ride right before the end of the year, which continues a streak of 8 years that I hadn't purposely worked on, but is a streak nonetheless.  That should satisfy Alex, who taunted me (late the night before) for stopping 5 or 6 miles short last month.

Once again, a great ride, great scenery, great folks.  Definitely enjoying the mix of activity this time of year, and also inspired by these riders and their rides to rig up one of my bikes (that I told J I would sell) for these sort of rides.
Posted by mike_hinterberg at 10:04 AM