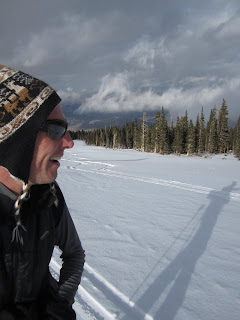 Visiting Snowmass for an annual conference, I enjoyed the opportunity to sleep right next to a premiere skiing destination.  With this year's thin snowpack, however, only a handful of groomed, icy green runs were open, and a couple of chairlifts.  With climbing skins and a willing spirit, however, this made conditions actually quite good.

For all of the Aspen areas storied reputation for elitism and wealth, the four developed ski resorts themselves show a respect for the tradition of free uphill skiing. 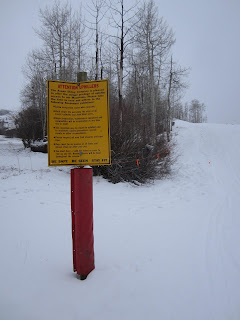 I did this last year, on skinnier skis, but was a little more hesitant this year due to the reduced terrain -- would it be too crowded such that an uphill skier, swimming against the stream like the salmon of Capistrano on limited snow, would be obnoxiously in the way?  Would machines be running full-bore on the non-open runs in order to manage the snow?  It turns out that these concerns were for nought. 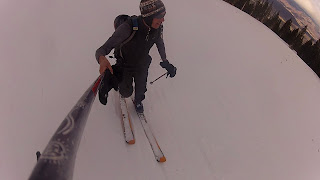 Not only were the downhill skiers respectful (or at least a non-issue), but all staff and patrollers were respectful and kind as well.  As I put my skins on at the base, a patroller gave me some beta on the conditions above.  Heading up, I generally kept an eye out for any snowcats or other machines, and the times I made eye contact with them or lift operators, I only got thumbs-up.

This time, I was much smarter about wearing limited gear uphill, working up a sweat, with plenty of warm clothes to wear downhill.  In just over an hour, I was already at the top of the lift-served terrain.  I followed an occasional skin track up another 45 minutes to the top of the Big Burn.  Here, I saw a solo skier enjoying the snow, and he told me he had just warmed up at the patrol hut at the top.

Great place to take a break, I appreciated it being open.  I was careful not to track in any snow. 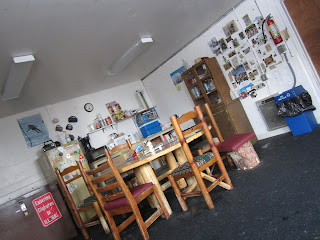 Taking my time, I changed clothes and de-skinned, before heading down.
Although the snow was still scarce up here, there were plenty lines of a legitimate 2 inches of untracked powder.  On a pleasant day, I had a wide-open run to myself! 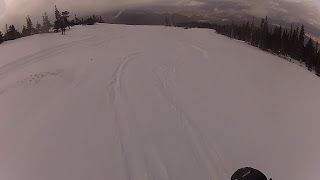 Too quickly, I rejoined the skied-off runs and masses, dodging gapers and trying not to get taken out by other people.  It was fun while it lasted.

I didn't have enough time for a second run, but I headed out again for more of the same the next day, this time skinning up under freshly falling snow.  Mid-mountain, some snowboarders were having a party, gave me the thumbs up and called me over.  They were out of beer but gave me a jello shot, and another one for the road, which I took to the top, before again having my own run down on even fresher powder. 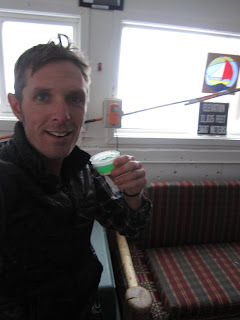 Cheers!
Posted by mike_hinterberg at 8:09 AM