Peru Creek Road is a popular ski and snowshoe tour, with minimal gain, a wide path, and great views.
Located between Keystone and Montezuma, we had a chance to check it out last month. 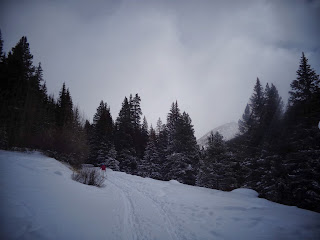 The road was packed smooth with snow, and has interesting mine remnants just after the first mile. 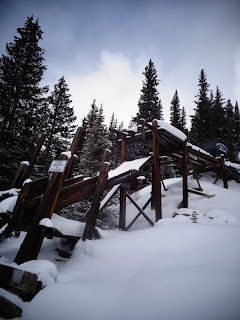 Some of our views were obscured by clouds and heavy winds up high, although the trail itself is nicely sheltered from wind.  After nearly 3 miles, staying straight on a few previous junctions, we reached an open, windy, and swampy area covered in deep snow.  Close to our halfway-mileage goal anyway, and not wanting to break more trail, we turned around. 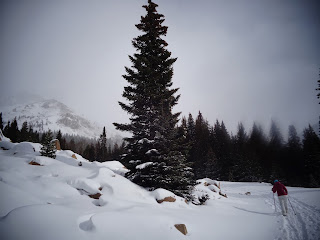 On the way back, we saw several other parties -- a mixture of skiers and snowshoers -- but it wasn't overly crowded and there was plenty of room for all.  We decided to take a short tour up in Chihauhau Gulch, which I knew ultimately led toward Gray's Peak, where it had a higher avalanche risk above treeline, but we just decided to poke around a bit.

It didn't hurt that someone had recently broken trail, and the sun was now shining. 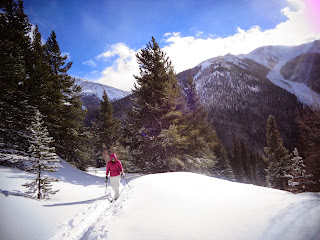 This short addition was worthy and recommended, as it passed directly through aspen groves, and quickly (after a stream crossing) provided superb views.  And deep powder! 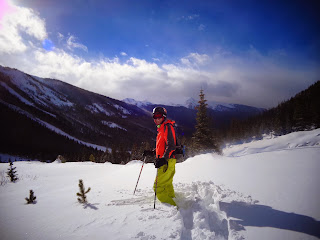 We met the couple that had just broken trail and decided not to go further, and we all had a short but satisfying glide back to Peru Creek Road, made better by a tighter trail through the aspens.

In the final mile, I coaxed J into trying another option, of a trail that forked to the left on the return.  My map (heavily "zoomed out" to show several counties) and the topography suggested that it was a parallel trail that would bring us back near our car, as we were paralleling the creek, so we gave it a go.

Of course, the trail (actually a dirt road called "Webster Street" on the map) kept climbing slightly but steadily, as Peru Creek dropped farther and farther below us.  "Let's just see where this ends up" won out slightly over "Maybe we should turn around now," but it was a great trail that again put us into aspen groves. 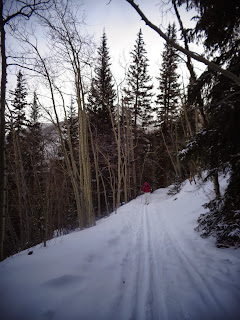 We began to see buildings, and it became evident that we were on our way to the town of Montezuma itself, which was secretly something I wanted to check out anyway, so it worked out.  After passing some mining/construction equipment, there was a neat little shelter on the side of the trail. 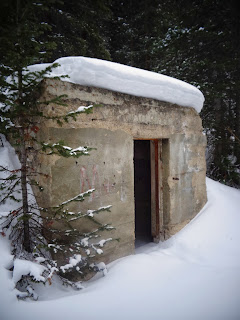 And then we were in Montezuma, which was pretty much just a collection of houses and buildings.

This left us about 3/4 mile past our parking spot.  I asked J if she wanted to ski, or if I should go get the car; and then the couple we met earlier went by in their truck (he drove down just to check out Montezuma quickly!) and offered us a ride, which would have been easy and quick in the back of the truck.

But J was content to finish up our tour on the edge of the road.  Despite finding myself doing it several times per season, I rarely see evidence of anyone else chopping across roadside ditch slop, so I was quite pleased that my wife was willing to do so!  What a gal. 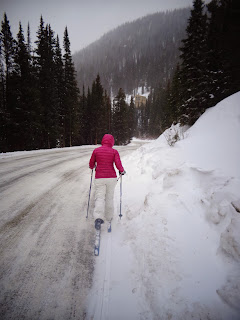 In short, Peru Creek is certainly an easy suggestion for winter touring, while some side options lead to scenic aspen groves and nicer downhills.  If Montezuma is on the agenda for some reason, or if you're staying there, Webster St./2nd Street is a more fun option when going from Montezuma back down to Peru Creek.
Create Maps or search from 80 million at MapMyRun

Posted by mike_hinterberg at 9:14 PM