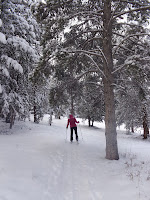 With several (4-5) inches of new snow on the ground in Golden, J and I looked for a quick, accessible ski with a shorter drive.  Having snow in town means it's a great time to check out new, nearby options.  Ironically, for all of the great trails in the Golden area, many of them are too rocky, steep, narrow, and/or windblown to be considered excellent skiing (I've tried to force the issue for some OK rock-skiing).  But, just a couple thousand feet higher are some fantastic options, and I-70 can be avoided.

We decided to go South on 285, and drove past Meyer Ranch Park, which itself is a popular sledding hill and would be a good but steeper option for skiing and snowshoeing, in favour of Flying J Ranch Park.  Although it looks straightforward on the map, it was a bit tricky to figure out how to get from 285 to Barkley Road and then 73 toward Evergreen (there isn't good signage right off of 285)...but everyone else in the world uses GPS so you'll probably figure it out just fine.

The road into the park had tire tracks but wasn't plowed, so luckily there was a balance of great new snow that wasn't too much for the ground clearance of my Civic.  Momentum was our friend as we made it up the hill into the lot that was replete with SUVs and trucks.

There's only one signed trail in the park: a 3 mile loop.  We were immediately surrounded by newly-frosted trees and fantastic snow, great for gliding, with some previous tracks and snowshoes.
We watched a coyote bound across a field, before posing underneath a large pine. 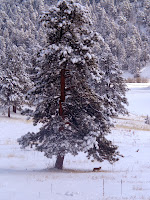 And pine trees were the rest of the story, including tight, narrow trails through lodgepole forest, as well as big, thick conifers that I didn't see as much in the northern part of the state, because 8000+ feet was usually found only on slanted, diagonal terrain in or near canyons. 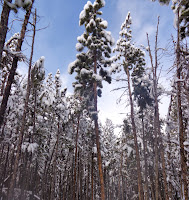 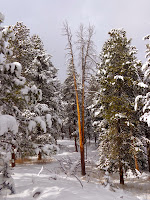 Near the end of our counterclockwise loop, we took a short detour up (rightside of the trail) into a sunny meadow, where we made a quick extra loop before heading back down.  We only skied about 80 minutes total, but it was nice to be in the woods to enjoy the snow after a pleasant and quick drive.  With more time, it would have been just as fun to do a second loop.
Going clockwise puts most of the climbing in the beginning, with a more fun descent in tight trees right in the middle; counterclockwise rolls, with a moderate descent saved for the very end.

It's a bit short for a single-loop run or hike, but is pretty fun on skis.  Or, apparently, fatbikes as well.
Posted by mike_hinterberg at 9:50 PM