J and I greatly enjoyed a brief trip to Panama.  Even in that span, I wrote about 40-50 pages* of observations about the country itself; the world we live in; how J and I have changed together; how travel always has a 4th dimension of context; the common bond (and challenges) we share with people around the world and how it's a beacon of hope for the future, etc.  And how you're the first white person ever to come up with all these conclusions in a week.

On most trips, I'm too exhausted each night to actually write anything.  This'll be no different.
Now I've lost the immediacy of sensation and emotion, but eventually I'll compensate by misremembering and embellishing immensely.

But, anyway, should you visit Panama now?  Later?  And, why?

In summary and I suppose stereotype, Panama is a beautiful, safe and friendly country, that's relatively easy to get around and can be relatively cheap.  Panama City is booming and things are changing quickly.  In some respects, they'll quickly get even better, as a subway line is well underway and slated to be completed in 2014.  This will save on the largest hassle and expense of traveling in Panama City by taxi.  The rapid and aggressive completion of this project mirrors the progressiveness of other investments, such as Panama Canal expansion, and planned expansion of free wifi across the country (this is very real and usable in Panama City and David).
So although the business and tourism infrastructure is there, by no means did we feel overwhelmed by other American tourists or hassled in any way. It's still reasonable and easy to experience your own travel agenda without being surrounded by tourists, which felt a bit more refreshing compared to what Costa Rica seemed like (and that was almost 10 years ago), although that's certainly a beautiful country as well.

As for Panama City itself, it's a large Latin American city (meh) with the Canal close by.
But I was surprised how enjoyable it was to walk around the Casco Viejo area.  It's a UNESCO world heritage site; rightfully so, with buildings dating from the 16th and 17th century.  You can't just manufacture 300-year-old buildings anywhere, so this is a fabulous place to visit.  Glorious architecture, such as old buildings and churches, abound, and they are quickly being repurposed for business and residential use. 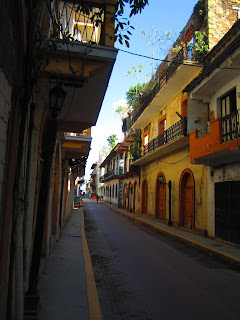 This has minor guidebook warnings about pickpockets and petty crime, and although we were only there in the late afternoon, the crowd and police presence made things feel very safe.  It seems to me like it has passed a tipping point of being a safe tourist draw, but you have to wonder or worry if some of that will be lost in coming decades.  It's something to see as soon as you can.

Bocas del Toro, (especially Bocas Town) by all means, has changed from the sleepy town it supposedly once was to a more of a tourist draw.  There are benefits in terms of finding lodging, dining, and supply of boats and boatmen to explore the other islands, but there are also challenges such as the amount of trash generated on the island.  Still, Isla Colon has only one road; you can enjoy a peaceful bike ride and solitude on the beach within an hour; and places like Isla Bastimentos are more laid-back, with the interior of that island and the others even more raw and natural. 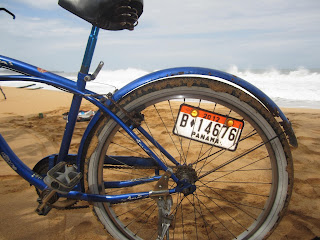 I haven't yet exposed myself to the all-inclusive disappointment of, say, Mexican resorts, so the biggest saving grace of going to Bocas now is precisely this contrast...mostly.  But the temporary restraint on development of places like Red Frog Beach resort will only last so long, as the script familiar to Mexico, Belize, and Costa Rica is likely to play out in our lifetime.
In that respect, go now!

And we didn't even have time to visit Guna Yala, which seems like a worthy trip in itself.

As for Boquete, it already has had an explosion of ex-patriation, and while I really enjoy the young folks that have made a leap to a simple lifestyle among the locals, the occasional clusters of old white people smug in their real estate deals, worldly self-satisfaction, and terrible Spanish does occasionally interfere with the preferred aura of international travel. 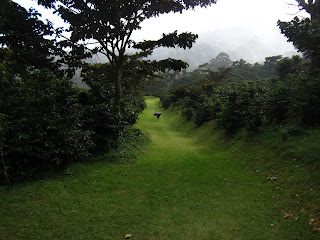 Still, look for the restaurants with menus (and prices) in Spanish, go for a hike, do things like go to the fair after sunset (when they return to their gated communities) and ride in the taxis and diablos rojos and you'll still get a Latin American experience. 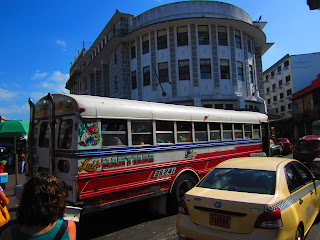 What are the diablos rojos?  They're the crazy, incongruous, pimped-out schoolbuses that serve as cheap transportation.  The owners take pride in packing as many people in as possible; getting to a destination as quickly as possible; but mostly, tricking out the bus with chrome pipes, a booming speaker system, and graffiti art.  One common theme, being a highly-Catholic country, is to paint nearly all of the front window with graffiti honouring Jesus and El Senor.  In combination with a rosary on the mirror and the requisite faith, only a small patch of window visibility is apparently necessary for safe travel. 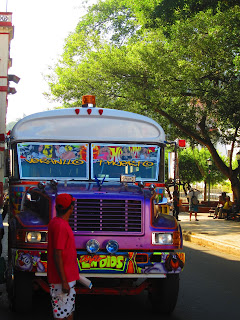 On a bus from Boquete to David, I watched the boy get out in front of me with something squirming in a bag -- this turned out to be a live rooster.

These are uniquely Panamanian, but are apparently a dying breed.

Perhaps the diablos rojos giving way to the subway is symbolic, as Panama is clearly enjoying a renaissance of business and tourist travel, but it's a good time to visit to capture it's lingering charms.