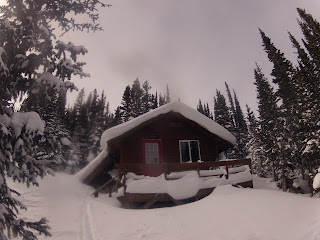 This was a trip from last weekend, that makes for a great ski or snowshoe loop.
Starting at the busy Eldora Ski Area parking lot, I headed up the far (climber's) left of the learning ski area, along the marked signs for Jenny Creek Trail, which remains a publicly-accessible NFS trail.  I enjoyed decently-packed snow on mellow terrain on waxless skis, until arriving at the Guinn Mountain trail intersection after a couple of miles.

Here, I headed up the Guinn Mountain trail, which climbed a bit more but was still manageable without skins on a packed trail.  Getting closer to the hut, the terrain opened up from a narrow tree-lined trail into an off-camber trail on a bit steeper slope, which included the ruins of a different cabin.  It was nice to have a previous track to follow, and would be both more work and a minimal but slight concern after heavy and blowing snow.  Shortly after this, the trail steepened enough on more powdery snow that it was worth putting my skins on, and I was soon up at the Arestua hut.

In the empty cabin, I enjoyed taking a few moments to eat and drink a bit, check out the register log, and the various ski posters.  Also within the hut was a guitar, a deck of cards, and a few shots of whiskey.  I left a dollar in the jar, as requested for day use, but hope to return some evening for a nice night in the woods, and get a full $2 worth.

The weather was still looking good for my planned goal of checking out the nearby summit of Guinn, which required 10 minutes or less of heading due south through the trees in the path of least resistance, slightly gaining in elevation, until the snow ran out, as the terrain opened up into a fantastic windswept tundra walk surrounded by mountains all round. 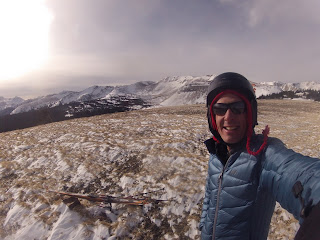 The sun felt great but it was windy as always near this part of the Divide, so I layered up and enjoyed more views.  Straight across from me was Rollins Pass road winding it's way through the iconic Needle Eye Tunnel, bringing back much warmer memories from a previous bike trip to Winter Park.
Noting the ease of travel on the terrain above the summit, I continued on to survey what the west and south aspects held, so as to descend to the Jenny Creek trail and make a loop.  After crossing the bare pack-trail just below the summit, I again found skiable but variable snow in the trees on a mellow angle to the west, and then hit a flat, open basin just below Yankee Doodle Lake.
Having seen Yankee Doodle Lake before, and achieving superior views from above, I didn't make the extra effort to visit it again.  And, the steep, ominous headwall above the lake and Rollins Pass Road reminded me of an unfortunate decade-old avalanche incident in which two otherwise well-prepared skiers were actually swept down into the lake (which then surged after the avalanche).

So I headed back down to Jenny Creek trail and saw a few snowshoers -- the first people I'd seen in a few hours.  I gradually descended the moderate grade (with the one short climb in the ski area) back to the car.

This was a fun and relatively tame loop for XC/backcountry "lite" touring, on a nice day -- when the winds pick up on the Divide and visibility is reduced, all bets are off.  I might actually suggest the loop in the opposite, clockwise direction, so as to have a more fun descent down the slightly steeper Guinn Mountain grade.  There aren't any really good turns right along this loop, so skinnier skis (with edges) work just fine, and although it seems slow to me, it'd actually be a pretty good snowshoe loop, considering the short hike over the Guinn summit.

Posted by mike_hinterberg at 8:25 PM