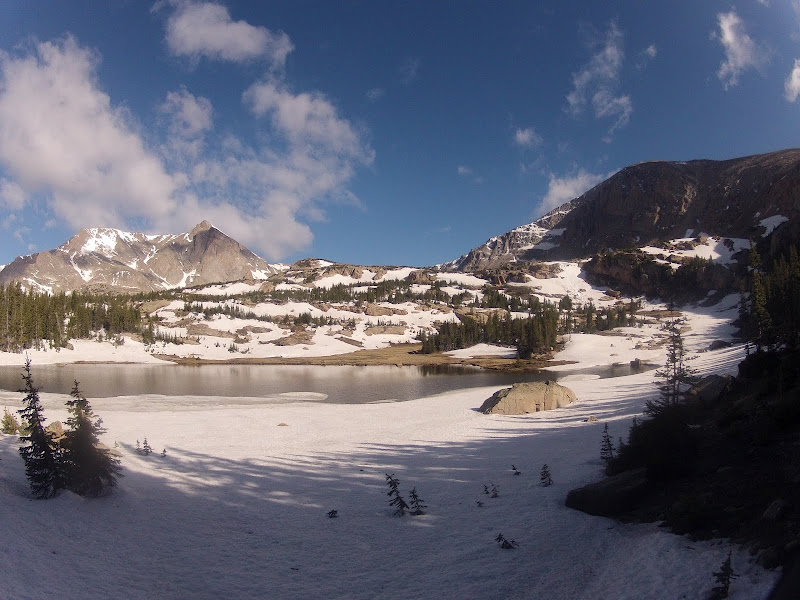 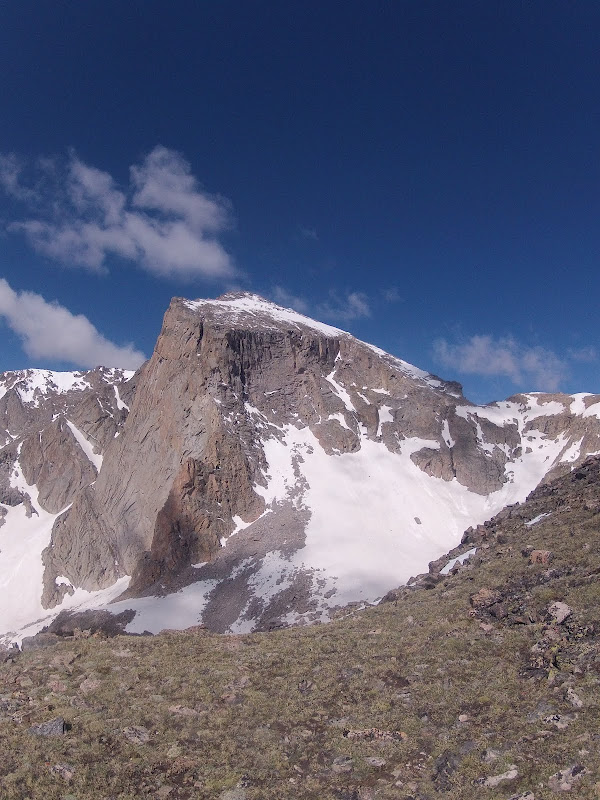 The route that looked the most fun is the Hourglass Ridge, the ridge that connects to the Chief's Head saddle. It's considered a Class 3, in mostly solid rock and ledgy tundra, but sure looks intimidating in photos, with steep dropoffs to either side, especially in the narrow middle part of the hourglass shape. The additional challenge of snow changes the dynamic further. 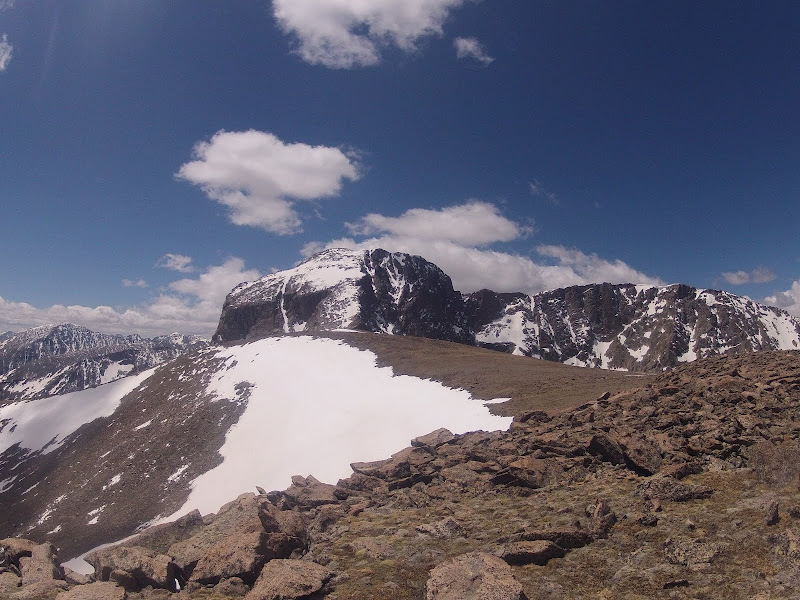 So I was excited to hear that Steph was planning a hike out there, on a day with favourable weather. Additionally, we would head up Chief's Head Peak, and consider a route down the ridge that led to Mt. Orton. I was very happy to finally make it out there, especially among great company, as Steph has more climbing experience than me (in addition to being a strong hiker and runner), which would make the day more enjoyable and safer.
So, after a 3:45AM departure from Fort Collins, we were able to begin hiking at first light.
Now although the peaks were the goal, this was also a first viewing for both of us of the Lion Lakes -- a truly sublime destination in its own right. The trail is solid for most of the way up, but as is the theme in Colorado this year especially, we encountered a bit of deadfall and snow in the last mile or so, necessitating detours and bushwhacking.
Because of that, and by following the drainage as a reference point, we were naturally drawn to the sound of rushing water. This turned out to be the pleasant surprise of Thunder Falls. 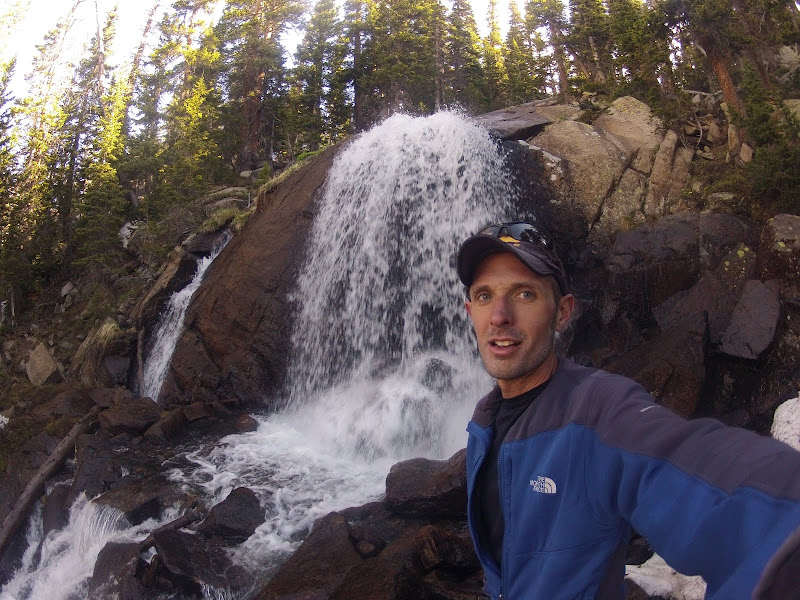 Thunder Falls itself is also a worthy and legitimate waterfall, lesser-known only because it's deeper in the park. I can't believe we're lucky enough to stumble upon things like this for a casual 5-minute visit before continuing -- it's almost a crime!
But onward we marched to treeline. Above the Lion Lakes is a perfect ramp that leads up to the saddle, a fun grassy stroll to new views on the other side. 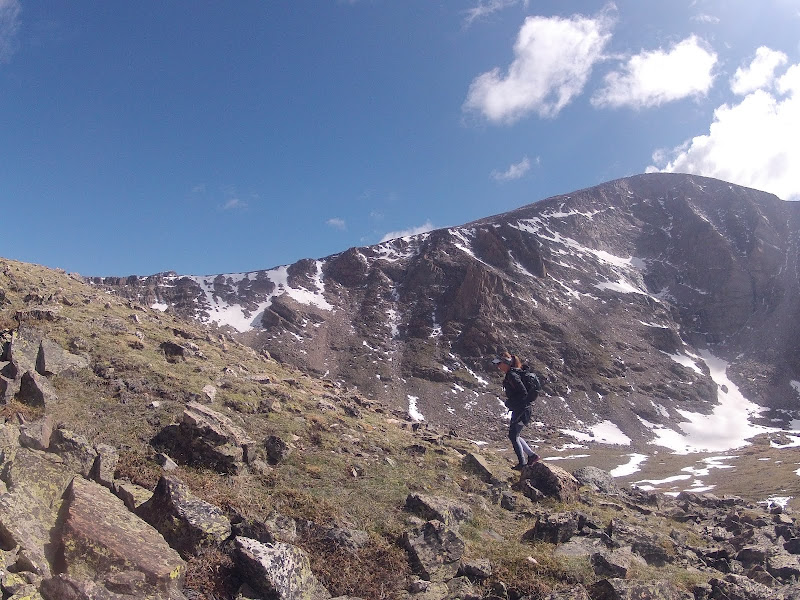 Steph in front of Chief's Head
This also gave us our first views of our summit goals. Chief's Head looked like a dry, direct walkup on talus. Mt. Alice, on the other hand, still had a fair amount of snow on it, and still looked somewhat steep and imposing. But we headed up towards the Hourglass Ridge for a closer look at what was dry, and to see if the snow was soft enough for kicking steps and plunging when necessary.
The verdict? As often is the case, a closer view shows more clear lines and features, so it was an easy decision to go upward. Also, the snow was generally soft, among various sections that were short enough that we didn't regret leaving our axes in the car. 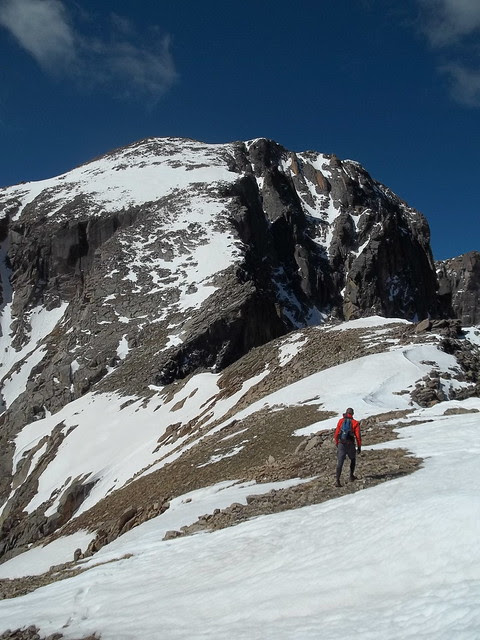 I was happy to follow Steph here -- not just because I trusted her experience -- but probably even more because I'm strategically lazy and it was convenient to leverage her footsteps. Thanks!
As tempting as it is to overplay the difficulty, in reality, the soft snow and grassy tufts of tundra and interspersed talus gave great steps all the way up, with the knowledge that downclimbing would also be manageable and safe. In fact, the entire route felt more Class 2+ than Class 3, as little actual climbing was needed. In that respect, Mt. Alice is one of the most spectacular Class 2+ peaks I've enjoyed, as the views and route itself suggest that one should have to work harder to get to the top. And, it's a direct route up one of the more interesting aspects, rather than a cheating sneak around the backside (as Chief's Head was going to be).
The weather was great and wind was low at the summit. Time to head down to Chief's Head.
Although Mt. Alice was more of my goal for a longer time, Chief's Head entranced me just this year, when Caleb and I hiked to Green Lake. Chief's Head's sheer north face drops straight into the lake, and I looked forward to that vantage point.
An hour or so later, and we were up high again, peering directly down into Glacier Gorge. 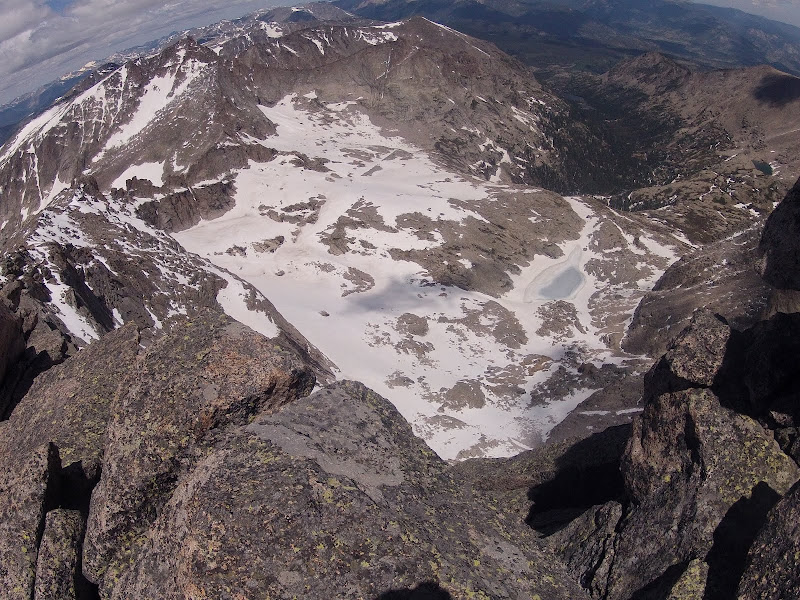 This was a particularly rewarding way to connect-the-dots with previous hikes and views.
From here, we also had great views of Longs, and could make out figures in the Keyhole.
Steph and I were 7th and 8th climbers of Chief's Head in 2012 -- there would be more than that summiting Longs during the day. The last climber of 2011 -- Aron Ralston. Fun to recognize names on the summit logs.
We also had a clear view down the ridge to Mt. Orton. I'm still not sure why Mt. Orton is Mount-Anything -- it's no more than a collection of rock clumps on the long grassy North ridge of Chief's Head. But, this long ridge would give us new views (including down into Sandbeach Lake), a new summit, and a way to skip past the trees to make a semi-loop back to the trail. 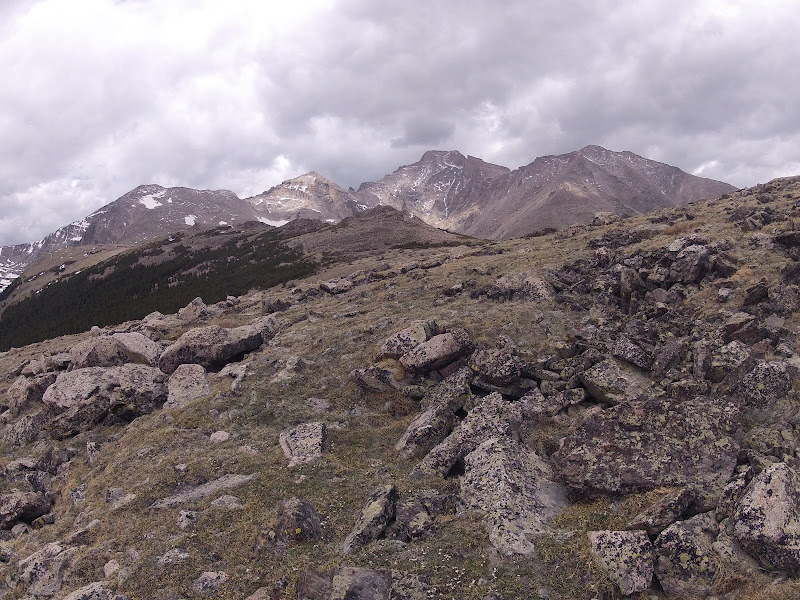 Looking back along the Mt. Orton Ridge
We stayed along the ridge and surveyed our views, with out last chance for line-of-sight and dead reckoning before our final descent to treeline. What's a little more bushwhacking?
Well, the final bushwhacking session took closer to 2 hours, including some marshy areas and smaller, unmapped ponds. If one just wanted to climb Mt. Orton for the views, connecting to Sandbeach Lake would be easier than back to the Lion Lakes trail, but this was not our goal. Still, the deadfall wasn't too bad (compared to the Glacier Gorge blowdown), so it was just a steady slog.
We popped out on the trail maybe a mile about the final junction. Having seen nobody else, we took a guess on the day's total: "0" and "2" were our guesses. We hit the final 1.4 miles, still sighting nobody, and then remembered how to jog. Just in time -- we had an audience of 7(!) people in the last mile.
Another spectacular day up high in RMNP.
Posted by mike_hinterberg at 11:43 AM