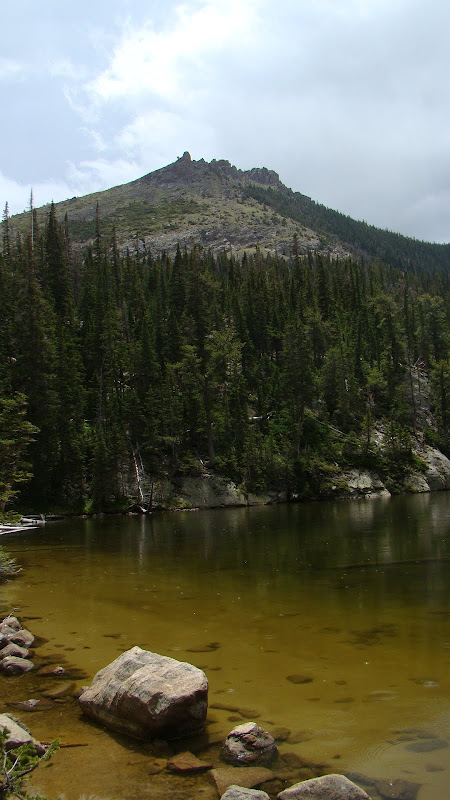 Joe Mills Mountain (11078')
Odessa Lake
~9 miles roundtrip (estimate) from Bear Lake TH
~2000 elevation gain (estimate)
J was up for a moderate dayhike, and had mentioned that she hadn't been to RMNP in awhile. Meanwhile, it feels like I've hit up many of the East side trails, and I like to get up on some sort of new peak with regularity, so it was time to improvise and compromise.
I came up with Joe Mills Mountain, a lowly, barely-11er just north of Flat Top Mountain. Joe Mills Mountain is a less-popular peak, often climbed safely in winter, requiring a short bit of bushwhacking from nearby trails, but is known by those who have climbed it as being a spectacular perch to view the greater mountains surrounding it. Perhaps this is fitting to the mountain's namesake, Joe Mills, who was the lesser-known brother of Enos Mills, the "father of Rocky Mountain National Park."
Knowing that the hike wasn't too long or exposed, we began our hike at the leisurely hour of 8:30, still early enough to secure parking in the popular Bear Lake parking lot. After weaving past gapers, we were soon on the main trail toward Flat Top and Odessa Lake. After the first mile split, we hung a right toward Odessa Lake. Other than a solo female hiker, we had the trail to ourselves. We crossed one larger, hardpacked snowfield in an open space below a 12000' treeless subsummit of Flat Top, with open views of Notch Top straight ahead. Shortly thereafter, crossing a boulderfield, Joe Mills Mountain was also in view to the NNW. 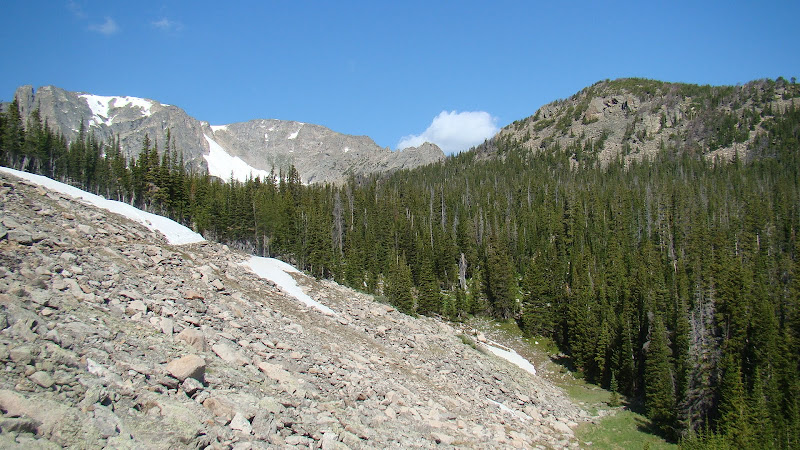 The trail was as close as it would get to the south side of the mountain, so time for about a quarter mile of bushwhacking. Viewed from the Odessa trail, the summit is the end of the ridge to the left, but the right side is a more slight grade. There was a visible, open, green ramp to the right of the saddle. Other options included sections of talus of unknown stability, and trees. Plenty of trees. We headed vaguely for the right of the saddle, alternating steep upward trudges in the trees, with traverses around them (and to avoid occasional sections of larger boulders) and along faint game trails, but never quite reached the open area spotted from below. But with only a few hundred feet to gain, mere upward movement got us their quickly enough.
We were only a short tromp away from the saddle, an open grassy area that was already a nice place to visit, and perhaps picnic. But the summit was still close. The only thing holding us back was krummholz -- and it was thick. 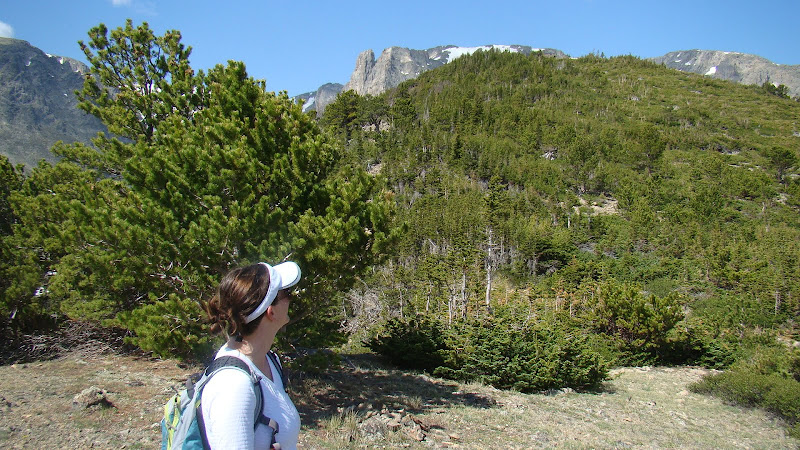 Progress through the brush was occasionally stunted, requiring slight backtracking and scraped legs, but in minutes we were on the summit ridge. 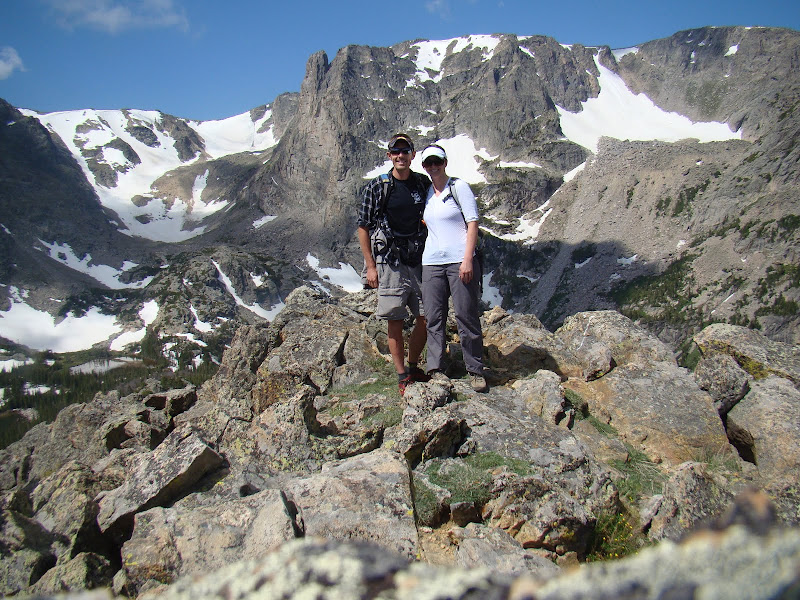 Indeed, the views were absolutely stunning. Notch Top straight ahead, snowfields on either side, and Little Matterhorn and Gable Top to our right, with Lake Helene and Odessa Lake reflecting the sky below. A small register jar suggested we were the 8th party this year (to be fair, some winter summits may have gone unlogged in deeper snow). Alone, together, we spent a good 20+ minutes of perfect, windless weather on the summit. Several waterfalls thundered and echoed below.
Most of what I knew from the summit ridge, and the northwestern side of the mountain, were abstract notions from the topo map. In person, it looked like a quick, steep Class 3 to open tundra, and if we headed northwest, we could stay along a treed spine of tundra, talus, and scree, giving us plenty of options that were all much more open than more bushwhacking. And the trail itself came close to an open boulderfield below. 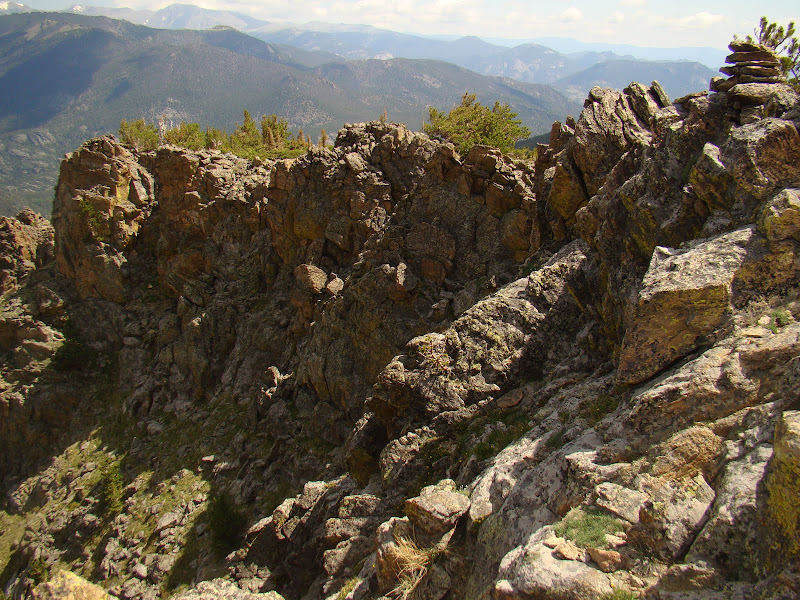 I tried to convince J of this suggested route, which I honestly believed would take no more time but be more interesting and show us new terrain. "Besides, it's much more satisfying to climb over a mountain," I'm pretty sure I said. She was game, as long as the rock on top wasn't loose. I went ahead of her to check: solid. Plenty of options. We headed down just below the summit cairn.
We zigzagged on steep tundra for a bit, among budding wildflowers, heading northwest toward the open ridge that ran down to the ridge. Steep trees were always an option, but we were able to remain vertical on the talus and surfable scree. 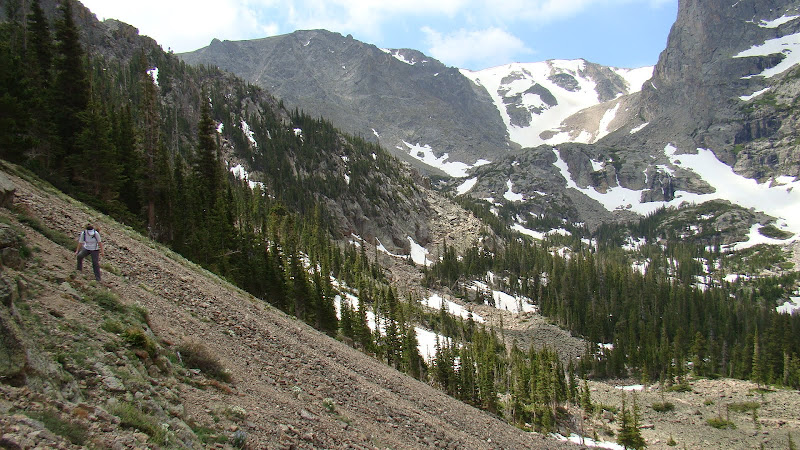 We were now back on the smooth trail. J turned right (away from where we came) without me saying anything -- apparently she was also game for visiting Odessa Lake, since we were "right there." Awesome.
Another bonus of this section of trail was that Joe Mills Mtn. looked more interesting and significant from this vantage point (first picture). Although we were still a ways off, we had a closer look at Grace Falls and other sections of weeping granite below Notch Top. 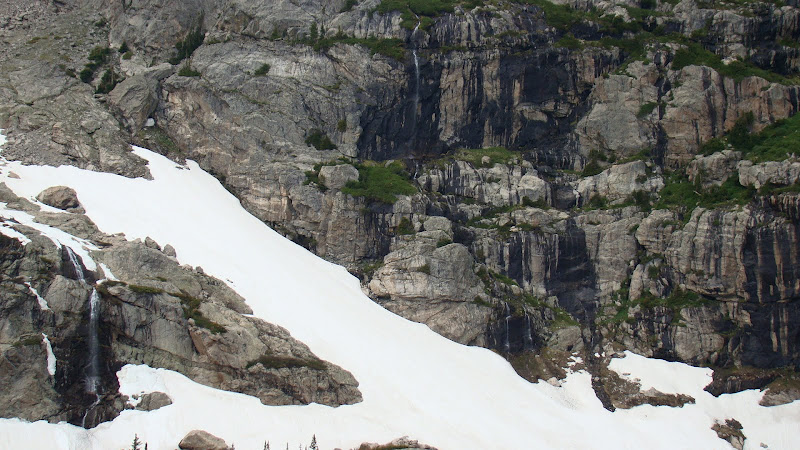 We then descended gradually to the north (far) side of Odessa, after thinking we would have reached it earlier from the south. A small bridge crosses Fern creek that feeds into Odessa. And, then, a mind-blowing perspective of Little Matterhorn. 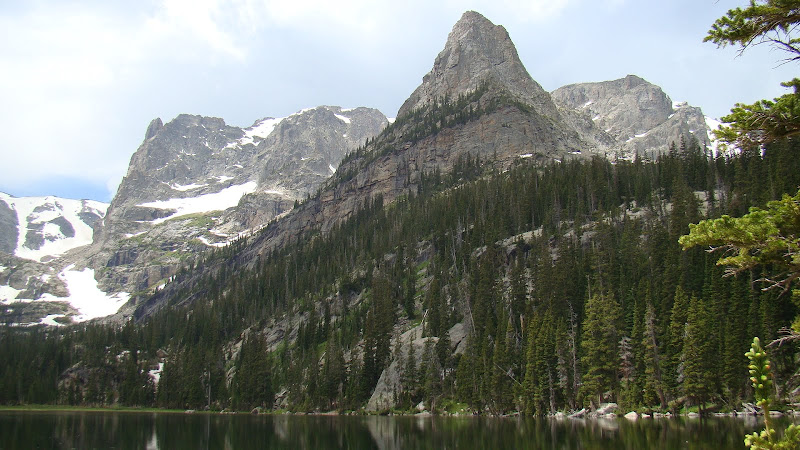 I've since learned there's an exposed Class 3/4 route up the back spine of Little Matterhorn. I want to return.
Clouds rolled in as we headed back, and light rain, but nothing threatening. The clouds just added to the atmosphere. 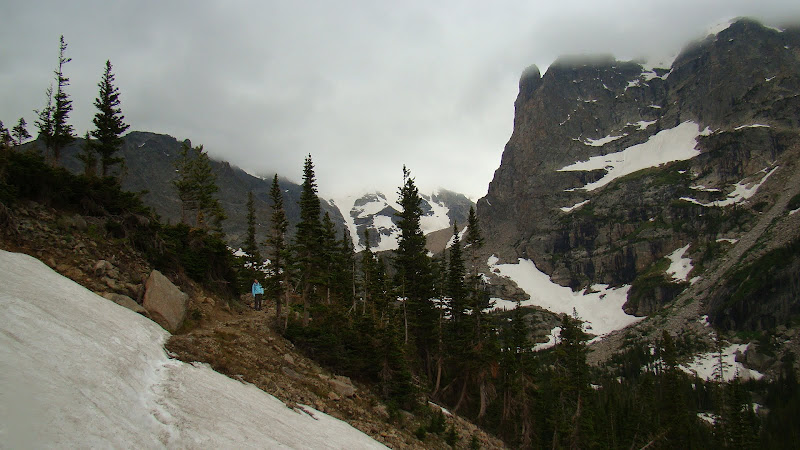 Without seeing many people, we felt like we had ventured deep in Rocky Mountain, despite being no more than 4 miles from a popular trailhead. This illusion was dispelled while dodging people stopped in the middle of the trail in the last half mile, but it was very nice while it lasted. I hesitated to post much about this hike, because the payoff in views is so high. It just takes a little bit of off-trail exploration. And overall, it ended up being fully wife-approved.
Summary
"I'm visiting from (insert state) and climbing Longs Peak -- what should I use as an acclimatization hike?" is a common question for visitors.
Twin Sisters is a common (and good) answer. I'm not as much of a fan of Deer Mountain and Estes Cone (other popular answers), although they're fine, lower mountains; Meadow Mountain would be my next Class 2 suggestion. Flat Top Mountain has a great trail as well, but is a little more popular and busy.
Joe Mills is another answer for those looking for an easy taste of a little bit of everything, and for practicing just a bit of off-trail hiking: not too far, spectacular views, relative solitude, relative safe routes for winter, light routefinding and bushwhacking, and opportunities (but not necessity) for Class 3 and possibly Class 4 scrambling on top.
Posted by mike_hinterberg at 9:50 AM