Snowmass Mountain
With about 4 hours of break, and no lift ticket, yet located right next door to a snow-covered mountain on a brilliant bluebird day, there was only one natural choice:
Go Higher.

I've never skied up a ski resort, so I decided to give it a go on my beat-up waxless backcountry skis, with no idea how long it would take, and how well received the act of skiing upward in Our National Forest would be amongst hundreds of people, mid-day, which is perfectly legal, generally, and allowed on all trails on Aspen-Snowmass Mountain (but isn't helpful if people aren't looking out for you or aren't aware).

Things were going relatively well as I stayed skiers-left of the slope, closer to the aspen groves on the lower part of the mountain, before needing to cross over to the other side. I traversed across the hill -- very uncrowded, being an early-season weekday -- with a nearly flat trajectory, when a helpful older gentleman told me to "stay to the side when going uphill!" I thanked him for this, but mentioned crossing over to the other side. I also made a mental note never to crash or drop anything again while skiing, as the slight uphill motion to retrieve lost objects might also be offensive.

The runs had changed from Green to Blue here, which slowed things down, but eventually I was at the Village Express midpoint. I stopped to check my map, near a ski photographer, who asked if I had any questions. "No, just seeing where I am."
As I considered my options, though, he did point out the way most of the uphill skiers went: Lunchline to Sunnyside. This was both easier and would lead me to aspects that were still in the afternoon sun, so it was a nice tip.

I picked my way over to Sunnyside, and now reached spots where hiking was easier than shuffling and slipping. I probably could have done this much earlier, as it was easier to keep a consistent hiking speed. I am starting to see how hiking up with good boots and lighter skis might just be the way to go instead of messing with skins. I hadn't brought anything to attach my skis to my pack, so I used them as extra poles to dig into the snow. On the final pitch, I went partly through the glades at the top, which had almost no traffic and had the usual zig-zagging paths that cut across the mountain between different tree sections.

Finally, about 2:10 after I started, I made it to the top of the "Big Burn" -- the actual summit was closed off, so I had reached the highest terrain that was currently open, more than 3000 feet higher than where I started.

I scarfed down a sandwich, and a bird landed on my skis, waiting for crumbs. 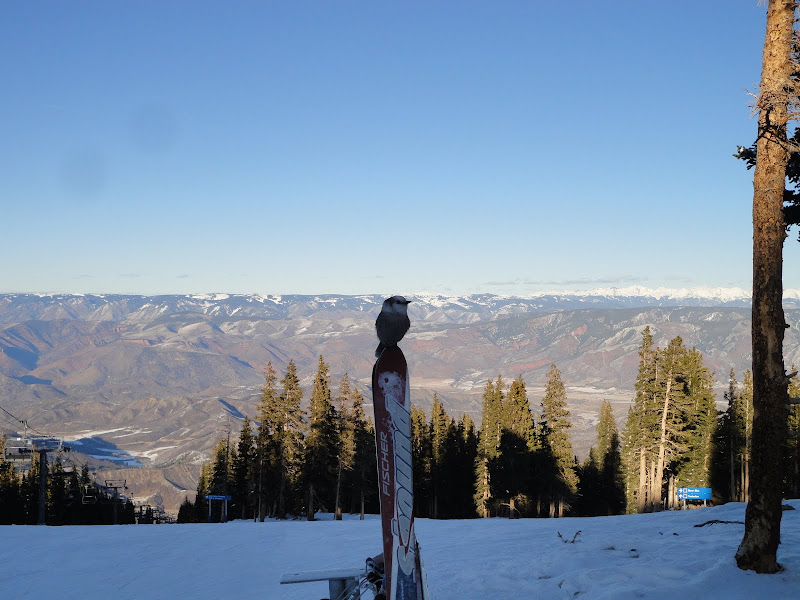 Now in the shade, it was time to head down. I had shed several layers on the way up, but was still soaked with sweat. I didn't have the energy or desire to mess with trying out tele turns, so I just made conservative swooping alpine turns -- these skis, and my ability on them, are sketchy at best. I made it down in half an hour, probably 4 times slower than I would have been on my alpine skis, but was happy to make it down safely after having earned my turns.

The next day, again with about 4 hours to spare in the afternoon, I found myself in possession of a lift ticket. I hurried over to the bus stop, nearly tripping over my loose clothes and gear, just in time to catch a bus. I decided to head over to the Highlands, which supposedly had great views, and some friends that were skiing over there for opening day.
I was not able to meet up with those friends, as they had enjoyed the steep runs up in the bowl, and I hadn't really planned on being there until the last minute. That wouldn't have been smart on my skinny skis anyway. Again, I was very careful and slow on these skis, especially as some areas were icing up, but enjoyed trying out a new area.
In fact, even without views from the bowl, I will say that this was the prettiest resort views I've seen in my limited experience. 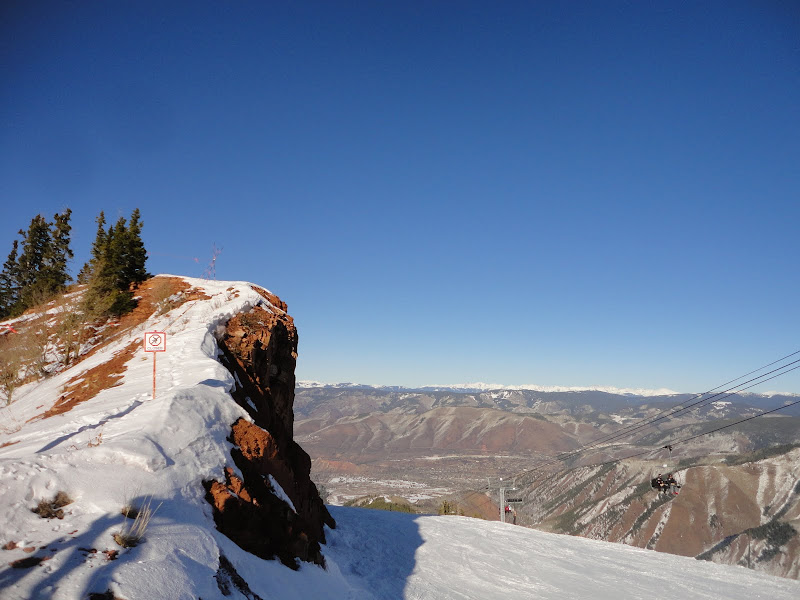 Posted by mike_hinterberg at 7:41 PM