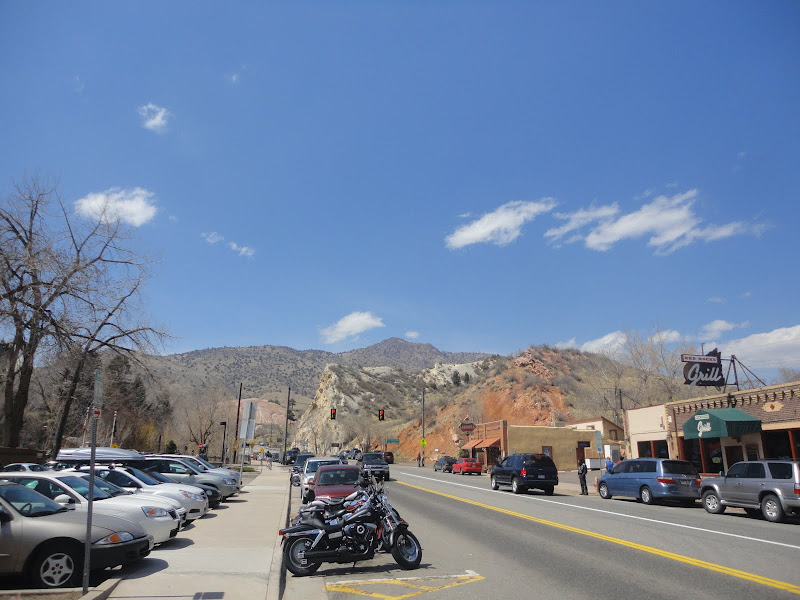 With a nice day on Saturday, J wanted to get out for a modest hike, and we didn't want to drive to far out of Denver. Thought it might be a good day to check out Mt. Morrison -- and we were glad we did.

Mt. Morrison is a prominent foothill above the quaint town of Morrison, Colorado. Even more famously, Mt. Morrison stands above Red Rocks park, home of the famous Red Rocks amphiteatre. Other than the antenna towers near the top, it seemed like it would be an interesting climb, with a great vantage point above the city.

As usual, mtnrunner2 takes much better photos, such as this one from last year: 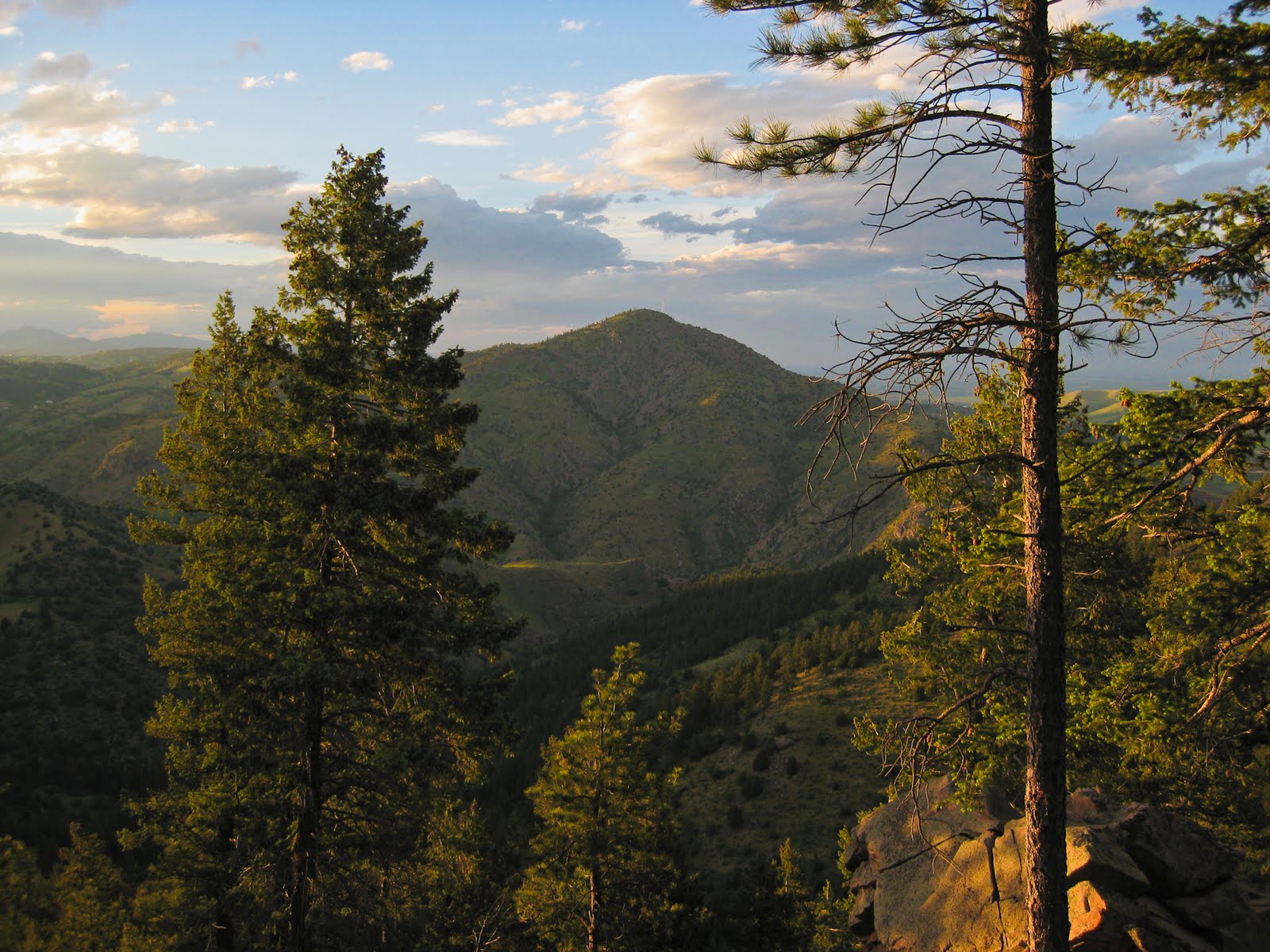 Otherwise, I didn't even know the logistics of hiking Mt. Morrison until recently. It doesn't appear on the official Red Rocks trail map, for example, and I hadn't seen it in popular guidebooks (despite being a very popular park). However, there was some discussion on 14ers.com that discussed the "South Ridge" trail (among others), which is described specifically on Summitpost.

It appears there are some "official unofficial" trails to the top, and only in the last few years, I've read, have some fences been removed to allow access to the summit. The various trails seem to have arisen as social trails, yet not prohibited, as the unofficial trailhead we started at had a sign next to it for hiking only (no bikes or horses). Several folks suggested that the South Ridge trail is the best developed trail, while the more popular and shorter trail from the amphitheater itself is more erosion-prone, which seemed both less fun, more crowded, and less ecologically sensitive.

So these trails appear to be popular, but not developed with modern sensibilities for heavy use, and operate in a nebulous state between official and unofficial. I'm torn, because I love cross-country hiking and scrambling in more remote mountains, whereas this area sees heavy use, but also want to see resources be used sustainably. On the other hand, it's littered with dead telephone poles, antenna, infrastructure for a funicular, and assorted concrete waste near the top. Now you know, and feel free to comment if you have more information or disagree.

South Ridge trail begins by parking at Entrance #4, the West entrance off of Bear Creek Rd. Immediately on your left is the obvious trail and sign, so park anywhere convenient and accessible near the entrance.

And then, there's nowhere to go but up! You begin the hike directly next to an overhead cable, and then over a knocked-down barbed wire fence. Higher up the hill, you actually go over the neglected cable itself: 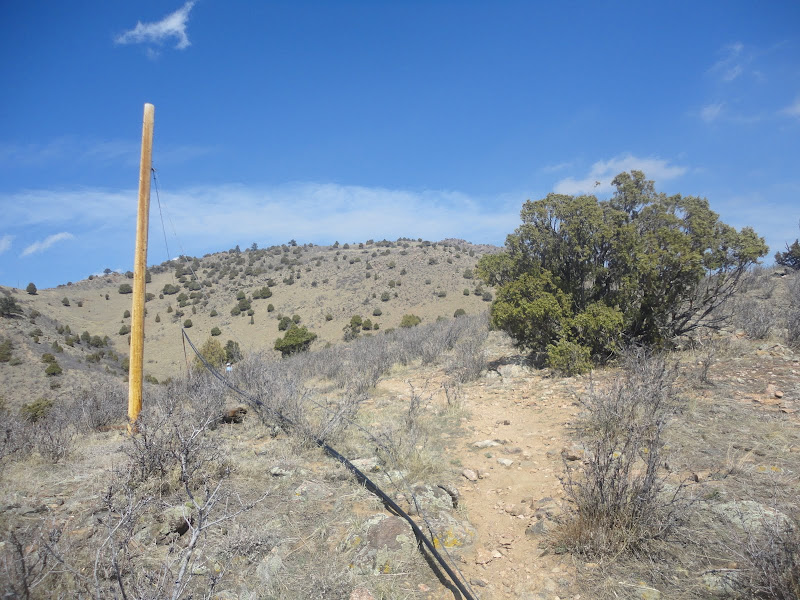 At the top of the first ridge, you have great views of the valley below, to the West, as you start following the ridge and continuing upward to the North: 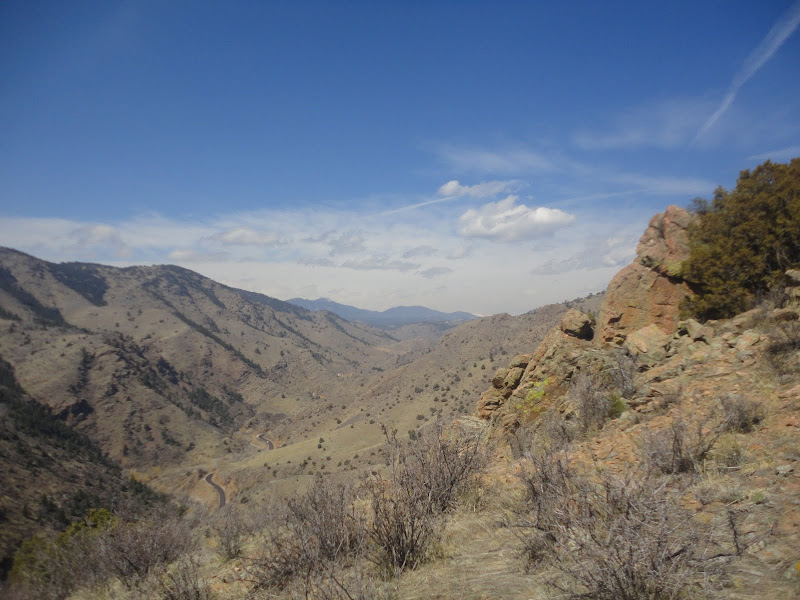 Continuing following the obvious ridgeline trail to the north, where the rocky summit itself comes into view: 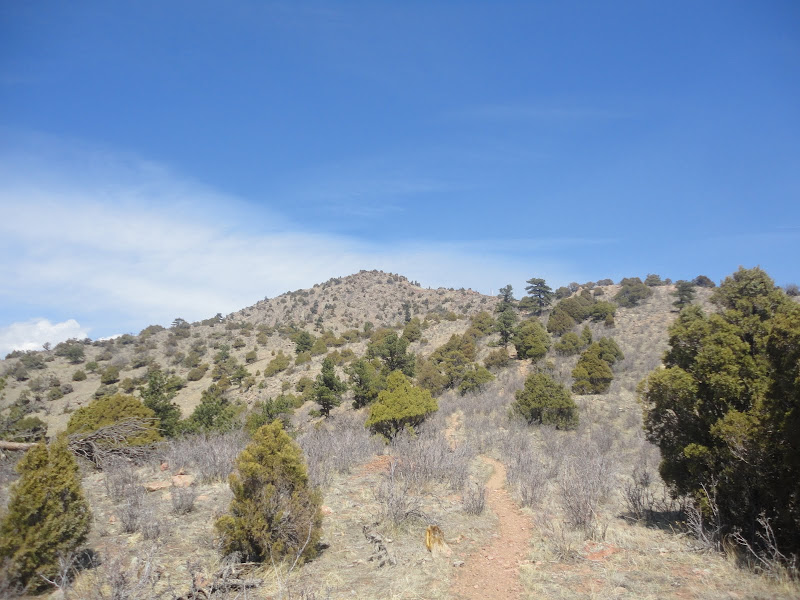 And on the last push to the summit, the fun begins!
The actual bits of trail are steep enough at times that you might want to put down a hand or grab a rock occasionally (and be careful to avoid sending loose rocks down on a person below), and then you have some occasional larger rocks and boulders to scramble over. But, none of these "problems" are exposed, nor more then 5 yards or so in length, so it's pretty much good clean fun. 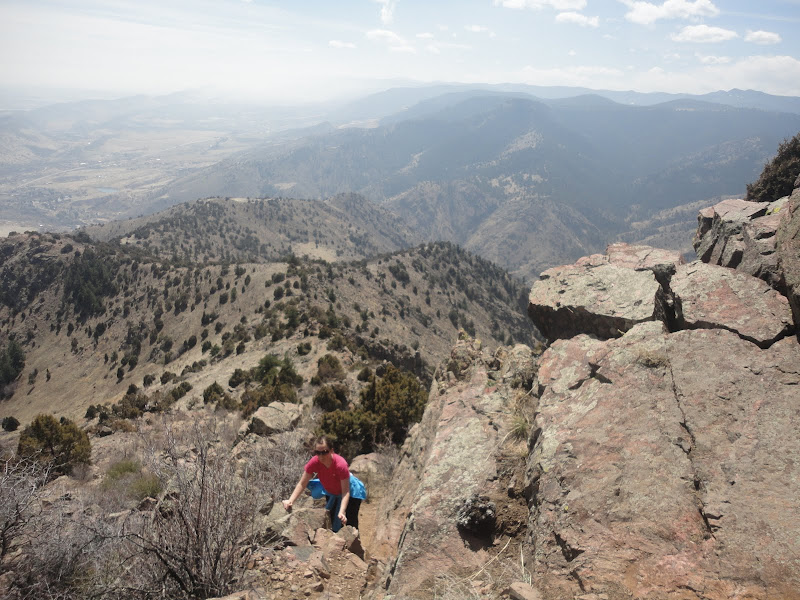 By now, Mt. Evans is clearly visible to the West, and a short bit of easy trail on top of rock leads to the summit. 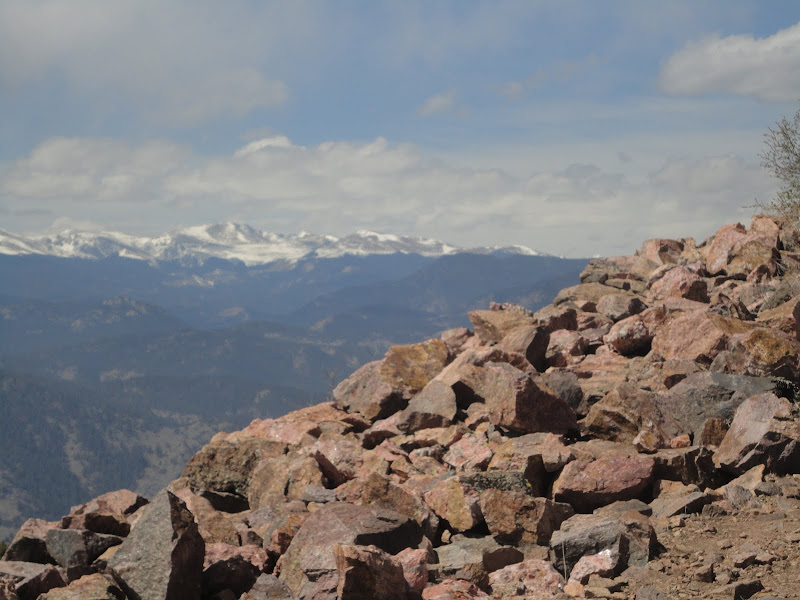 We both liked this hike, and I liked it more than I thought I would. It's right near the magic 1000ft/1M ratio that marks much of the Class 2 mountains I've enjoyed hiking with J in the Sawatch Range especially, so I can see this as a good "14er training" hike for people obsessed with such things. It has some scrambly bits to be interesting while being relatively safe, and is great practice for steep running in either direction (as I annoyed J by goofing off with some repeats on the way down). And, we still only saw maybe a half dozen people or so on the trail. Meanwhile, being a Sunday, other folks were running the amphiteater stairs below -- over and over and over -- I don't discount that as a good workout, but was happier to have the views up top.
Posted by mike_hinterberg at 6:58 PM