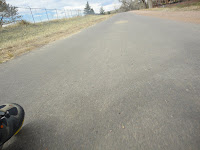 Perfect, warm, sunny saturday. Didn't want to drive anywhere (J had the car, anyway), and I didn't want to monkey around with traffic on the road bike. On a day like today, everybody's out, and I'd rather join it than fight it.

But, I also wanted to continue my non-running experiment this week at least to see if my leg would feel better. So I brought out the rollerblades!

I hit the HCT and Cherry Creek Trail in style, including my little mp3 player (I run with it less than 5% of the time) that has a speaker so I could subject everyone to my music. It also warns them of my approaching awesomeness as well.
(Ben had recently suggested that the best rollerblading would involve carrying an old-school boombox).

Now I've never rollerbladed a marathon before (maybe a half was the farthest?), so I thought that sounded like a good idea. But first, some rollerblade history.

Rollerblade History
I did "learn" to rollerskate at grade school skating parties. 'member those? Problem is, I never really learned correctly: I pushed off with my right foot repeatedly, kind of like a skateboard (I also had a skateboard and never got good at it, but it had skeletons on it and looked cool) and then coasted on my left foot. And I certainly couldn't ice skate (never even tried).

In middle school, probably because of the Wayne's World movie, I wanted to get rollerblades and a hockey stick and ball so my cousins and I could play rollerblade hockey. This didn't work out so well when we realized our neighborhood roads had all these pebbles and cracks on them that we hadn't noticed earlier on our bikes. And still, no skills for any of us, so we went back to playing football on the street.

Didn't think of it much until college, when I had been dating J for a year, who was great at figure skating. Meanwhile, a friend, Neil W., and I used to study together, and one day he pointed out that we could skate for just a couple bucks at noon (including rentals) at the "Shell" by Camp Randall. So a couple days a week, we ice skated, all year, as I learned to skate. Neil W. helped me, and even cranked my laces tight for me (which he said was imporant). This whole thing would be great to watch with some sort of musical montage. Eventually I did some basic crossovers and skated backwards -- and this was all in secret from J! Then eventually J and I were able to skate together, and we continued to do so -- maybe 2 or 3 more times, ever.

By senior year of college, I had a sweet rental house with 4 roommates on Lake Monona. One time I tried skating around it in my old skates -- don't remember if I even made it all the way around (7 miles or so?) but barely moved in the wind and thought I was gonna die. Then I borrowed my roommate's skates, some sweet Nike's, and it made a world of difference! I learned about bearings and ABEC ratings: basically, a higher number is faster (skates are nice and uncomplicated that way). J got me some as a gift, and I used them a few times in Madison.

Then, J and I definitely rollerbladed together more than we ice skated: occasionally in the Twin Cities, sometimes to class and mostly on nice weekends near Lake Calhoun. Then we moved to San Diego, and the best spot was the trails around Crown Point near Mission Bay (and along the Pacific Beach boardwalk). By then, we met "other" Neil, and Diana, and often met them on perfect weekend mornings for skating and breakfast. And that reminds me: I worked with one guy in San Diego, who was definitely "in" to rollerblading: he had done the Minnesota Duluth North Shore Inline Marathon a few times, even returning from San Diego to do it. I thought that sounded really cool, but 26 miles sounded crazy far for anything less than a bike! But the point is, there is apparently a pocket of rollerblade culture in Minnesota, and it was perfectly acceptable in San Diego (actually, in PB it was cooler to have old-school skates and be able to dance and stuff), even if it's not as popular elsewhere.

We also took our blades with us for a Labor Day weekend trip to Vancouver and Victoria, BC, where we bladed in Stanley Park, which was awesome. But then we carried our heavy skates in our packs the whole rest of the time.

Then, in the Fort, a few times we bladed in South Fort Collins and on the bike paths; namely, the Spring Creek/Mason/Power loop that ends up being 13 miles. For the first 6 months or maybe even a year, I think I actually rollerbladed to work more than any other transportation -- at ~2.5 miles, the bike ride was "too short" and it was easy to stash the blades in a locker, yet I wasn't sweaty like I would be from running.

So now, Denver -- I hadn't rollerbladed here at all.

Denver Rollerblading
So today, on a perfect day, I saw 3 other rollerbladers in 3 hours! Bad news is, they all appeared *older* than me. I gave them the knowing nod, but I think they were also focused on not wiping out on some crack in the trail. (To make up for it, though, some legit kids on skateboards gave me the nod as well). Actually, for the most part (especially Cherry Creek) rollerblading here is decent.

Rollerblading is more popular say in Wash Park, but I am more of a cover-the-map sort of dude than a park-loop dude when it comes to anything, though. It appears that there is a group that meets regularly and then hits the streets...neat!

So normally when running, I cut off HCT on Florida, but it's a steep hill with a stop sign in the middle that would mean death on wheels (based on my relative inability to stop gracefully on rollerblades), so I followed the winding HCT the extra miles to Cherry Creek. I had mapped out that this route would be 13.1 miles where the trail crossed Speer. Unfortunately, I hadn't noticed that it first crosses right after the country club, and then the trail runs parallel for another few miles until crossing it for real, basically in LoDo, which was actually 16 miles (I thought I was just slowing down).

So I ended up blading my first ultra. At 5:45ish miles, nothing to write home about -- many dudes run faster than that! But it accomplished my goal of not irritating my groin muscle at all (I figured it would be a nice, 3 hour adductor stretch), and also accomplished a newish goal (which used to be the older M.O., and might be related to lingering injury) of not chasing running miles if there's a fun alternative.

Mostly, though, it just made other muscles hurt and blisters appear. Importantly, I didn't wipe out!

Recommendations
I highly recommend the Cherry Creek Trail for rollerblading and people-watching. The Highline Canal Trail (HCT) is decent, too -- it's smoother by the golf course west of Parker, and noticeably more rough to the East.
Posted by mike_hinterberg at 8:48 PM