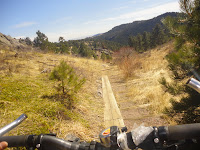 Been consciously avoiding running this week (as an experiment: results inconclusive, to see if my nagging groin/leg thing would get better), and I had more school work this week anyway. Had a few hours and access to the car today.
I was thinking about road biking, but mountain bikers have been getting a bad rap lately, so I dusted my mt. bike off, and headed to White Ranch in Golden (having noticed just in time that Elk Range trail on Centennial Cone is closed for the season).

White Ranch
It was a gorgeous day and the wind finally died down, so I headed up Belcher Hill. Unlike running there last month, when there was mud and ice, it was dry, loose sand on the front side today. As I mentioned, I hadn't mt. biked much lately, and although I live for steep aerobic climbs, some of the moderately technical rock sections were making me dab or stop when I shouldn't have.

Finally, I reached the rolling sections, but I still felt slow and overly cautious. The waterbars, stairs, and loose sand -- frankly -- suck. I like trails where I can ride the whole time and have good flow. And, if erosion control is necessary for certain trails (and it is), even as a mt. biker, I do understand the concern about poor trail construction, poor riding habits that make things worse, and some areas and types of soil that just don't hold up well to bike traffic. By Gawd, look at the glory of the singletrack in Fruita to understand this distinction.

I decided not to check out the backside and headed back down. But, the upper level singletrack is significantly better. Still, I was dragging and tentative here. My brake was dragging.

Finally, I just flipped the damn bike over and took a look. There is a black lever piece outside of the brake caliper itself where I had the cable routed directly underneath it. The lever was pushing against the brake cable, and limiting how far I could squeeze the brake! Duh, I rerouted the cable and had an instant improvement. This also explains why the problem was intermittent, as the cable was poorly routed (by me) so it occasionally (but not always) was limited in this way.

This was the fix I needed, as though I assumed I was slow on climbs from not having ridden, I really was held back by the brake as well. It was much more fun this way. I encountered more people on the way down, and said "Hello" and gave plenty of room and warning as an ambassador to the sport. Stopped at one point to watch some deer, and chatted with some hikers.

So I had already made my decision to head down early, but I had a plan: check out North Table Mountain.

North Table Mountain
North Table Mountain has wide, non-technical trails that wind to the top of the mesa. It looked like it would have great views, and is a great locals' workout, but harder to justify as a destination due to the shorter trails. But I was in the mood more for speed than technical monkey business, so it was easy to stop off and give it a shot.

Headed to the top in around 7 minutes, to great views: 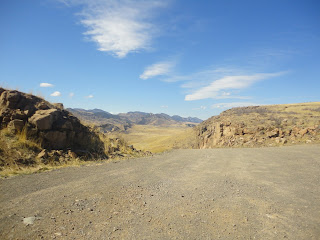 Immediately got distracted by the gravel pit/quarry to the right. Some informal trails and such, but no no-trespassing signs: it looked like a fun little rocky playground. Checked it out and then continued to finish the loop.

Just some smooth rolling and then downhill. Not knowing what to expect, I rode the brakes quite a bit. When I hit the 110-degree turn back down off of Tilting Mesa, I came to a complete stop, and checked my rims out of curiosity.

Hot Rims!
I've checked my road bike rims, on purpose, coming down Flagstaff, Trail Ridge, Mt. Evans, Skyline Dr., Haleakala, etc., and found them to be warm. (Even though road bikes are often going faster, there's also often enough room and ability to sit up and use the wind to slow you down, more than on a mt. bike trail). But in this case, OUCH! I put a little bit of water on, and it didn't sizzle, but it steamed right off! I've heard rumors of that (the tube will explode, and/or the bead or tire melts), but never had it happen myself.

I only had moderate downhill now and took it easy, and the rims cooled off pretty quickly.

Anyway, the short ride on Table Mtn. was better than I thought it would be, and I was in a better mood than when I started.

Learned some good things by hopping on the bike: doesn't seem to affect my groin/leg much at all (even with weirder, jerky moves on a mt. bike compared to a road bike); got my brake dialed in, finally; and it's time to get that front rotor mounted!

And as always, when I haven't done it in a few months, I think to myself, why don't I ride more often?
Posted by mike_hinterberg at 6:55 PM