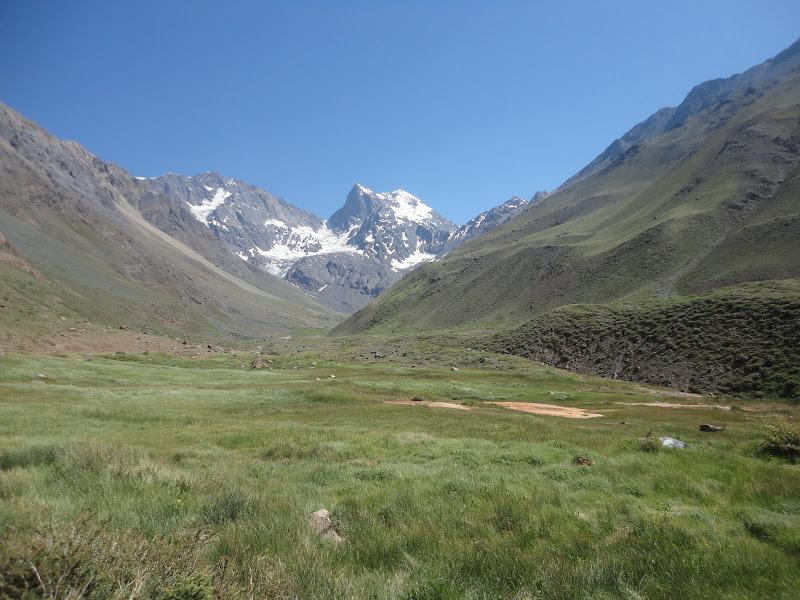 
After spending the first night in the canyon, our plan was to hike to the San Francisco glacier in Parque Nacional El Morado. This was another hour or so (conservative) drive up the canyon. As I mentioned earlier, some websites warn about needing a 4x4 due to deteriorating road conditions, so I was unsure if we'd be able to make it up there. Fortunately, the road was hardpacked dirt and rock, and the Yaris handled it just fine. The worst of the road itself was merely washboards, but no deep ruts or anything. I would compare it to Weld County dirt roads here in Colorado. The traffic was light enough, even on a weekend, that riding a bike would have been a fine option as well (although one would need to carry a sufficient amount of water), preferably a mountain bike or a cross bike.

Climbing the dusty canyon and getting closer to the park, all of the sudden the gigantic Volcan San Jose glows white with snow in the distance, where the Chile-Argentine border hangs in the air above 19000 feet. 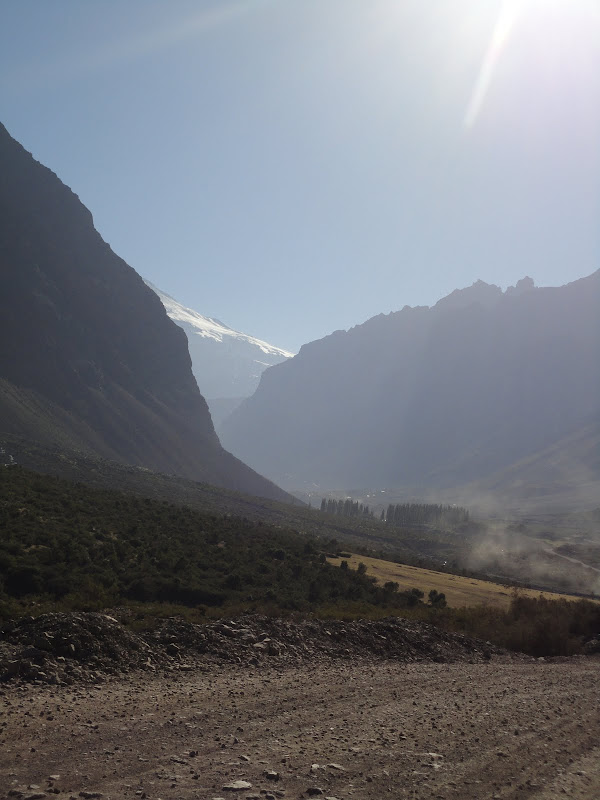 Then we reached the turnoff for the park itself. The driving became a little more interesting here, as we climbed a steeper, rocky hill. But not to worry, as there were boards spaced for tire tracks to help the climb! All you had to do was line up the car tires and drive on the boards up the hill! 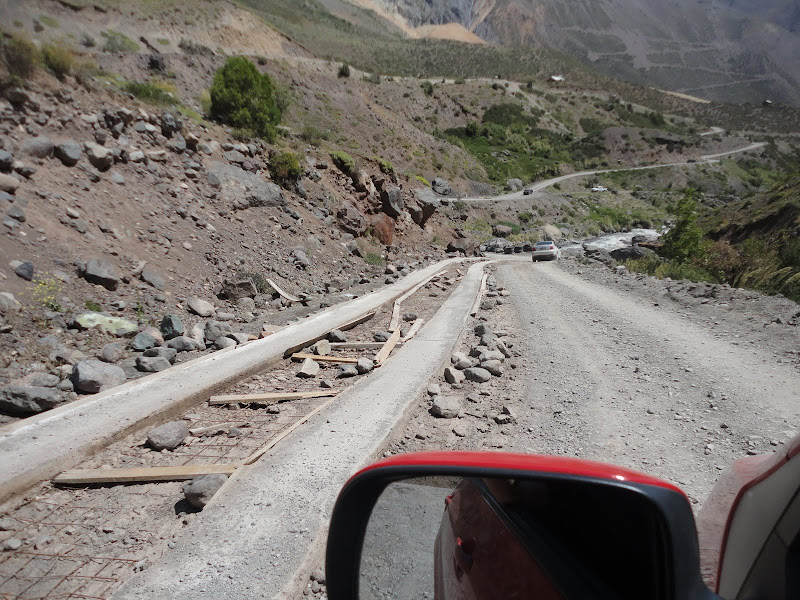 It's like pulling up a ramp in your garage, which always makes me nervous, except like 500 times longer. I knew there was no turning back, so I focused on some sort of rhythmic yoga breathing as if I were climbing a hill on a bike, and kept a steady slow speed. I was afraid of slipping the Yaris off the side and getting stuck and hitting the nether regions on some rocks. It wasn't as bad as I thought, and I guess it's something you'd get used to.

After that short climb, we entered a little town with some market stalls, but we were a bit earlier than most folks, so I was unsure to park. I asked a friendly woman and she talked about two different lots up the road...but over this sketchy bridge: 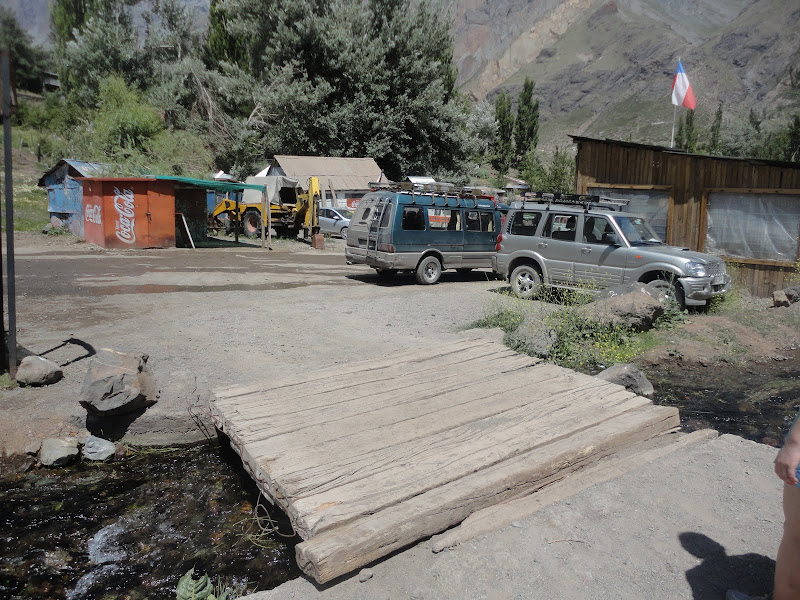 Luckily, that bridge was Yaris-ready, too. She had said that the "CONAF" (National Park) entrance was up further on a bridge, so I kept driving up a narrow road, but that was for CONAF only, so I needed to back up the road. I parked just over the other side of the sketchy bridge -- I would have been just fine parking by all the stalls in the first place, as it only saved a few hundred yards of walking.

Next, we walked back up the hill to the entrance on the bridge. The park opens at 8:30, and we were there at 9:30. There were only 3 parties ahead of us, which is good since it was a weekend. We paid $1500 pesos/cp, which is $3 per person. The friendly ranger had hiked the Grand Canyon as well as Rainier in the US, gave us a map, and sent us on our way.

The park has exactly one trail, ascending from South to North. It is 8km one-way to the base of the San Francisco glacier, at the foot of El Morado. Climbing on the rocks is "forbidden", though climbing of the mountain (El Morado and El Mirador), I believe, is allowed, though I don't know what sort of permits one might need. However, along the way are some small pools and a small lake, and many people hike to one of these areas, which is still surrounded by stunning alpine scenery. 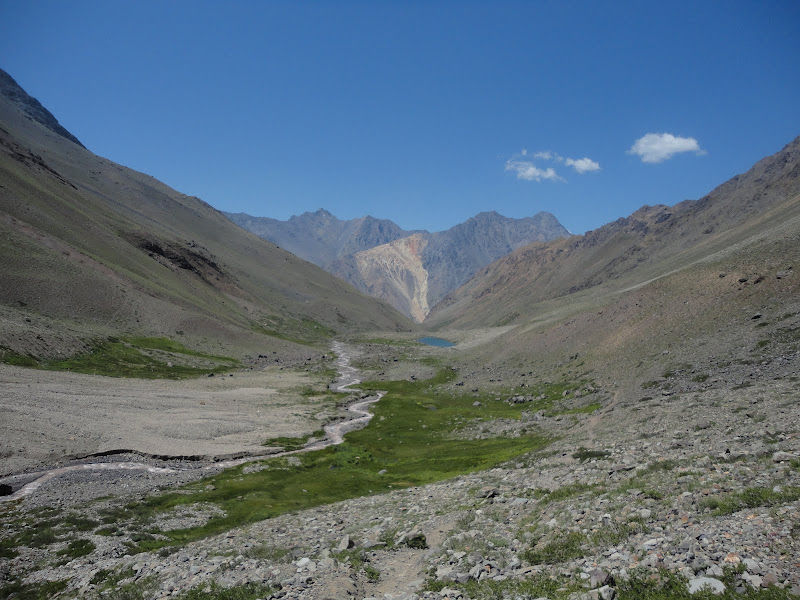 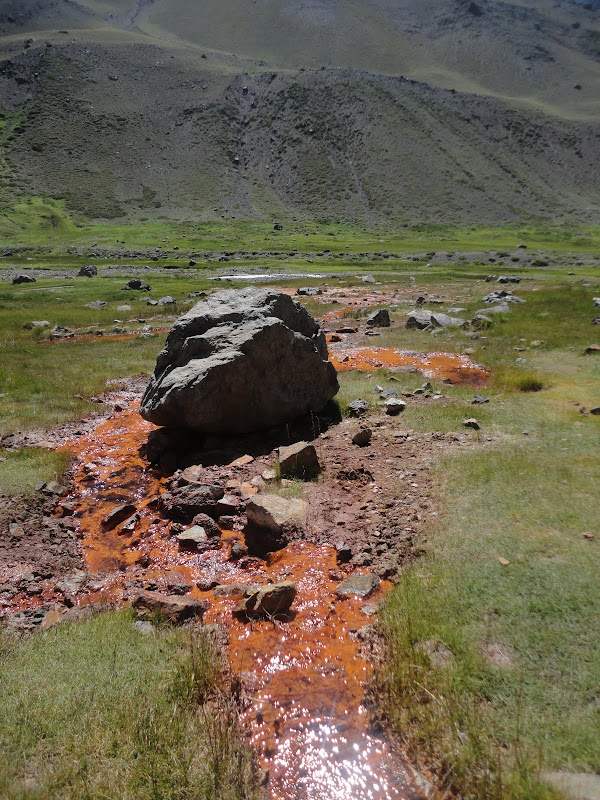 After 8km is a sign warning against climbing on the glacier itself, but it still looks somewhat distant. Then, I realize, "That's no moon, it's a space station!" That is, I was staring at the higher, obvious snow fields, without appreciating the rock and dirt-covered mass right in front of us. 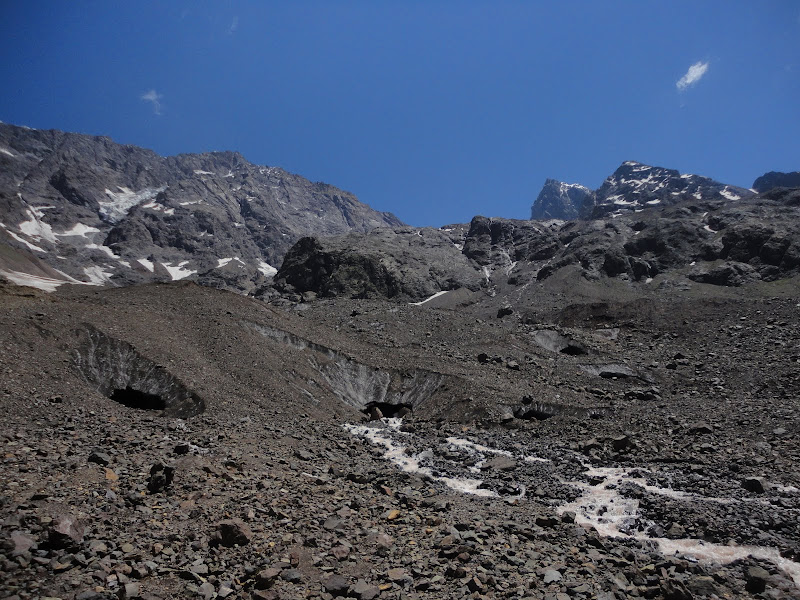 Crossing a short boulder field gives an up-close view of the glacier itself. 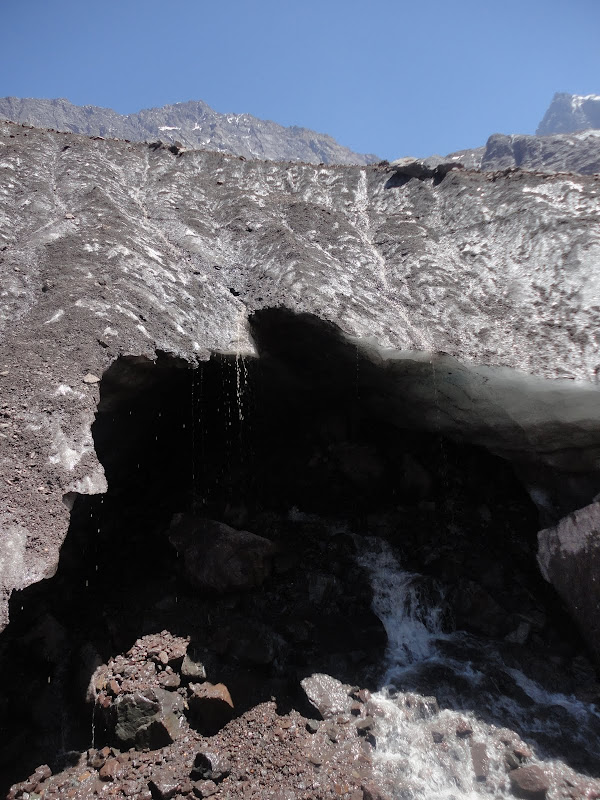 These pictures don't do any justice to the actual experience. While it's hard to imagine something as slow as a glacier as "powerful", that's exactly what it was. Beneath the melting ice caves were rushing torrents of water, and a cool breeze coming straight out. The ground beneath us was squishy and unstable. Ice chunks and sizeable rocks regularly dropped from the ceiling or rolled from above, splashing into the river below. That is, as tempting as it seemed to go inside the gaping glacial maw itself, it was alive and intimidating. After a few pictures, we headed down a bit for a lunch break, and then enjoyed more views in the opposite direction.

Also not obvious in these pictures is exactly how purple (morado in Spanish) the mountain and rock really is. I picked up a few small stones, and in any light, you would call it "purple." It is closer to the "America" song and Colorado Rockies logo than anything I have seen in Colorado, absolutely sublime.

On the way down, we saw a few dozen friendly folks, most everyone smiling and greeting each other. Still, it was nice to have arrived early and enjoyed the glacier up close by ourselves. J held a great pace and passed numerous parties in both directions, suggesting to me that she'll be nice and ready for some more hikes this summer. I also saw one trail runner, it turns out he was part of a group. He had gone for a ~40 minute run, I asked about having run all the way to the glacier or not and other runs but he mainly talked about the upcoming Santiago marathon in April. I showed him the Denver Marathon shirt I had on -- represent! Interestingly, in this and another conversation I had, the races were always referred to by the sponsor -- Adidas, North Face, etc.

In short, this was a gorgeous, memorable day in the Andes. I enjoyed the beautiful summer day in January, while simultaneously being motivated and making plans for further local exploration this summer in Colorado -- only 6 months away! It's amazing how different mountains can be both completely foreign yet somehow reassuringly familiar at the same time.
Posted by mike_hinterberg at 4:33 PM