Cascada de las Animas is an "eco-tour nature sanctuary" in the Canyon. It has a long and interesting history, having been family land for generations that essentially formed a private nature sanctuary that was eventually declared protected as such by the Chilean government, but not before a lengthy battle that prevented a gas pipeline from going through the land.

The building we stayed in has a cozy, open common area that was perfect for relaxing, drinking wine, and reading: 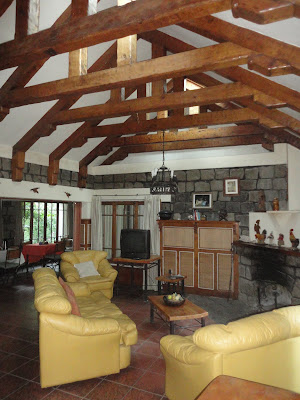 In addition, they have a relaxing and cool piscina which was perfect for the 30-degree days: 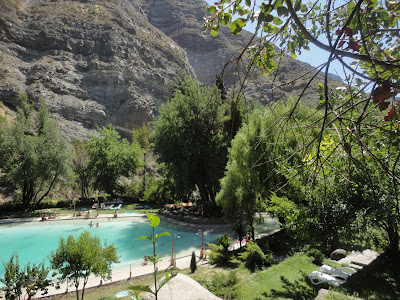 This was a nice place to sit and drink a beer if you were an adult. And everyone under the age of three was either running around fully naked or else breastfeeding.

But the real attraction of the area is the source of the name: "Waterfall of the Spirits" The waterfall is on the land of the sanctuary, and is less than 3km of a "hike." The route is marked by signs, and hiking here is free with permission by staying here. I was told we could hike sin guia as long as we were back by 4pm, as we would need a key for the bridge. However, when I went near the trailhead, the guide said, "I don't think this is possible," but with some assurances we were able to go off on our own. It would have been free to go with the guide as well, so that wasn't the issue, but this is a clear cultural difference I've run into in the past when wanting to hike in Latin America: much of it is guided and costs money. Part of it is probably a preference of people that travel there, and part of it is a way to make money, understandably, but I've seen many traveling natives of the country partaking in guided tours as well. I previously had a discussion with a native in Costa Rica about wanting to hike around Arenal Volcano, and she was somewhat incredulous: What if you get lost? Or hurt? Isn't it better to have a guide point out different things to you? etc.

In any case, I do not take for granted the ability to roam around my home state and country at will, and in some respects I think it's a fairly unique cultural value to desire to explore openly and freely (admittedly, this limited observation is often on the peripheral of larger urban areas, which is likely biased towards observing folks who only occasionally leave the city). One last thought here: I think the key to protection of lands is empowering people everywhere to feel like they can partake in their public land freely and creatively, without a power-relationship to a bureaucracy of permits and rules, etc. But clearly I digress!


So the 25-minute hike to the waterfall was peaceful, and we were able to enjoy it ourselves. We crossed a few little suspension bridges, including one that twisted at odd angles when I got cocky and started (but didn't finish) running across, until we came to the falls themselves, which had an upper and lower cascade, and were quite inviting in the afternoon heat.

Sure enough, when we headed back, a couple of small, guided groups were heading out.

For a few of our lunches and dinner, we headed to the local market and made a meal in the lodge. Our staples were fresh torta bread (easy to find everywhere), some vegetables (tomato, pepper, garlic), and some creamy cheese. We enjoyed watching the guy at the counter wipe a crusty knife on a dirty apron before cutting off a block of cheese, but the cheese was delicious and luckily we never got sick. We also picked up a boxed liter of wine (Santa Rita 120) for like $2, which I think is about 1/5th the U.S. cost by volume.

One night, though, we did try the restaurant on the lodging grounds, which was actually quite excellent.
Specifically, they had a fabulous seasoned mushroom appetizer and salmon entree. The restaurant wraps around trees and overlooks the river and canyon itself, and was a great place to hang out and enjoy a long meal: 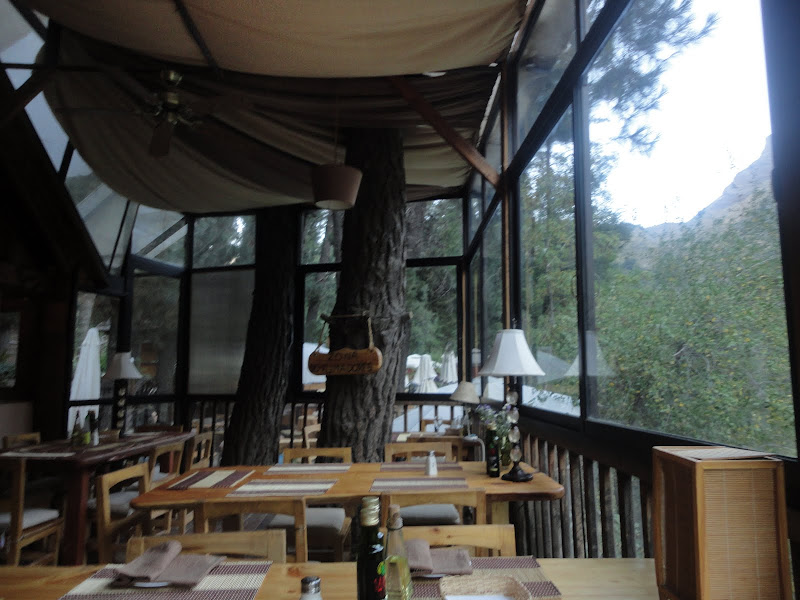 Posted by mike_hinterberg at 3:50 PM