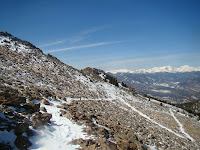 When cruising down the Peak-to-Peak highway, the twin rock heaps that make up Twin Sisters mountain poke out on the east side of the road. Twin Sisters is an especially popular summer hike, known for its Long views of the Front Range, and for being an accessible hike above treeline. Also, although part of the Park, it doesn't require an entrance fee, and with an elevation gain of ~2500 feet in 4 miles, it's known as a popular acclimatization hike for those wishing to visit even higher summits.

For many of those reasons, I've purposely avoided hiking this trail in the summer. But, with Front Range temperatures approaching 60, full sunshine, and virtually no wind, it seemed like a great late-Winter hike for J and I.

With no threat of summer storms, we arrived fashionably late at 10am. We passed another party that started just before us, and then saw no other parties until right before the summit. This gave us a perfectly leisurely walk on well-packed snow. Snowshoes weren't needed on the trail, though they wouldn't have hurt (other than slowing us down a bit); and, truthfully, there was enough snow and room on the trail that backcountry skis would have been fun for most of the trail. I hadn't read reports of cross-country skiing this trail or seen this trail in winter guidebooks, but I think it would be a great trail in an early morning after fresh snow.

After winding between NF and NP land, the trail eventually steepens as it approaches treeline, and opens up to gorgeous views to the west. 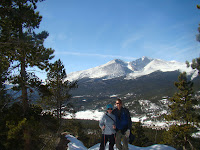 At this point, we were grateful to have had a party in front of us that left good tracks as we curved from south to east. We had a few deeper moments of postholing, but soon returned to packed snow as the trail steepened just before treeline. Here, I found a single Yak Trax (Yak Track?), and began carrying it with me.

Ah, the tundra above treeline: pretty much my favorite place to be! I always feel like it's a whole new world up there, and I want to run around and explore every little section I can see. For anyone that wonders if there is any wonder left in the world, I implore you to get above the trees.

I should mention one unfortunate aspect of the top of this hike: a communications tower violating the ridge between the Twin Sisters. It's a little unusual for NP land.

Even still, this area allows for plenty of fun easy rock scrambling. We saw the party in front of us, and I offered up the Yak, which was indeed lost by a girl in the party. They were as happy as we were to be up high, and then we were alone as we scrambled to the top of the West Peak.


After a lunch break, I stared at the East Peak. Clearly, it was a little bit higher (sources say by about 15 feet), so I had permission to quickly scramble over: 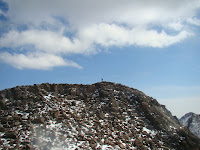 Ten minutes, I was down, up, and down again, ready to head back.

The descent was even more fun, in the full sun and soft snow. I ran down the steeper sections in my snow boots, and we started encountering a few more parties heading up or taking a break at the final sections, with a fair number of people on snowshoes as well. One woman said I had too much energy like a puppy; another said I was smiling too much! I couldn't help it, it was just that much fun to bound through the snow.

We made it back to the car and found it intact: I was worried that my stinky banana peel left in the car might be awakening-hungry-bear-bait.

In all, I highly recommend a winter hike of Twin Sisters: great views, great snow, not too crowded.
Posted by mike_hinterberg at 7:46 PM