I had heard and read good things about the laid-back nature of the Salida trail marathon. A good crowd was going to be there, the price was right, and the weather was looking great for a fun day in the mountains. So we got a nice carpool group going, and headed out: Nick Clark, Nick Pedatella, and Caroline Soong. It was nice to meet all of them and talk about running, as well as discussing the best (and worst) places to live and run in Colorado -- mostly based on availability of quality microbrewed beer.

After a few hours, we were in Salida, where the three of them had bunks at the Simple Lodge Hostel, which seemed very pleasant and a great deal in town. My plan was to sleep in the car as close to town as possible. Based on some online research and a description from Nick, it seemed like the Arkansas Headwaters Recreation Area (AHRA) had some close-by camping, but it was ambiguous (to me) if it was actually 'free' to camp there. Well, it turns out that it's an easy, excellent place to sleep off-season -- I'm sure it's quite busy during the summer -- but this time of year, nobody was around, and it appears that staying in a non-developed spot is free. Just head East on Hwy 50 out of town for just over a mile, and take the first left just past the RV park, being sure to be after the sign that says "Entering Public Lands."

I slept just OK, with plenty of room in the car, and my sleeping bag being warm enough. True, you're not far off the highway, but the price is right. Oh, I should mention that Nick talked me into a pre-race bomber of Fat Tire. This conflicted with my previous plans of not drinking for the week before a race, but I couldn't argue with his results. I thought it might help me sleep, but it just made me have to pee more. D'oh, why do you have to go more when you're camping and it's cold out?

I woke up at dawn before my redundant alarm clocks went off, with a gorgeous view of the Collegiate Peaks in front of me. Sweet. Headed into town to meet the others, who were busy making coffee and waffles, which they shared. Even better. Met a few interesting folks in the hostel, including CRUD'ers from the Springs, and some altogether random folk.

We all got ready and picked up our stuff. As the sun cleared the foothills and buildings, it was shaping up to be a warm day. We got ready and headed over to the start line. Everyone was fairly nonchalant and ready to go, and we were off. The race began with a jumble of marathoners, half-marathoners, and a fun run, but there was plenty of room up the dirt roads for all of us.

We began climbing....climbing...and climbing some more. Nothing to steep, but steady. I felt good, and was surprised to keep an eye on Pedatella and Burch. I knew they'd blow me away on the descents, but it also should have been a clear sign that I was going out too fast! We reached the half-marathon turnaround and kept climbing, and I only saw a few half marathoners at the turnaround. That should've been another sign...

I did slow a bit purposefully here, and ditched the shirt, preparing myself for full-on winter sunburn. But it felt so good! Finally, we turned left to Turret, and had some fun rollers and descents on the snow, along with great views. I was feeling mostly good, with just a little heaviness in the legs, but I was prepared for a fast and fun descent in the 2nd half. At the turnaround, I saw Timmy Parr fly by, shirtless and smiling, with several minutes on Nick, and then Burch. I was pleasantly surprised to be within 10 minutes of those guys, and within a couple minutes of the women's leader, Keri Nelson. I knew they'd hit the downhills faster, but I still was looking forward to a screaming descent after all that climbing, and having a respectable time, and maybe catching up to Keri.

Except that's not how the course was, and neither were my skillz. Shoulda studied better! Lots of rolling on the backside of the course, as well as mud, rocks, ice, and snow. You couldn't take your mind off of the trail for a second, and I took a few spectacular slides while somehow remaining upright. (Not everybody did, as I counted a bloody elbow and fractured coccyx amongst the overall carnage in the runners ahead of me). I did blast some of the fun downhills, but never seemed to get a long section of momentum. By the time we hit the 17.2 mile turn -- the last aid station on the course -- I was in a bit of disbelief that we were 'only' at mile 17.2. Even more stupid, I grew tired of carrying a full Gatorade bottle, so I ditched half of it about 5 miles out, only to run out in the last few exposed, sunny miles later.

It was clear that I was fading a bit and just holding on to a manageable pace. My goals of catching anybody, let alone staying within 20 or so minutes of the leaders, was clearly out the window, as was running a negative split on the net downhill. I still had pre-race goals of top-10/top-10%, so I had that to salvage. On long downhills, I saw Brownie and another runner catching up. If I didn't keep running, I was going to get passed by two guys in the last few miles, with one of them being a proud mountain alcoholic running with a perpetual hangover -- not that there's anything wrong with that (except when fueled on swill beer). As we made our way down the last hill, a virtual spotter and ultra-super fan, Bill Duper, accurately told me I was 10th, and no one was in sight. "Yeah, but they're coming quickly!" I told him. So those last few miles, I made that my life's goal (for the next 15 minutes or so): no more looking at the watch, just don't get caught, pure and simple.

I wound around and finally found the elusive finish line. My stomach was cramping, and I needed water. I felt out of it when I first crossed the line, which Nick noticed immediately. (The Gatorade and food mess all over my face also gave it away).

I did finish in the top 10 at least. Though I did get "chicked", I can't complain: turns out Keri Nelson ran a screaming second half downhill through the snow, as witnessed by NMP -- well, it doesn't hurt that she's like a snowshoe racing studdess!

Here, I should note, that both Timmy and Keri (let alone other runners) gave encouraging comments on the turnaround to other runners. Both are class-acts, which is another reason that makes the trail-running and ultra scene so enjoyable.

So my first real trail marathon taught me some lessons. This is only the 2nd time I've really bonked, the other time being the Colorado Marathon, whereas I've finished 50-milers feeling great and smiling. The theme? Starting out too fast! My best and fastest marathon had some pretty dead-even splits, and in the ultras I purposefully started out slow.

However, after 40 oz of water or so and some delicious hot soup, I felt completely revived, and enjoyed chatting with other runners on a beautiful day. Brownie delivered Guiness to Nick, post-haste, and this was thoughtfully shared with other runners. All in all, a fun day in the mountains, and I have a nice winter sunburn to prove it! 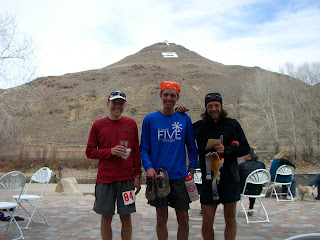 Posted by mike_hinterberg at 9:59 AM