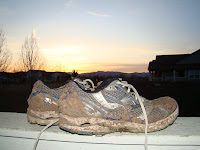 2 weeks ago, the muddy downhills in Salida and (relatively) warmer temps wiped me out a bit. With 3 weeks to go before a 50k, I was getting a little anxious about my preparation. The following weekend, I had a good but still-painful 27-miler as a trainer. Legs still felt a bit beat up, with a tight left quad and hip flexor*, but kept pushing during the week, and legs started to loosen up. It seems like little-to-no taper is all the rage these days, so rather than cut the long run down this weekend, I decided that 3 weeks of marathons in a row would be kinda neat and maybe set me up for a strong summer...Or beat my legs up even more.

* - Too much self-indulgent detail. Sorry. Back to my implicit goal of more stories, less minor training details.

Anyway, the weather was primed to be beautiful: upper 50s, DFC-wind. I waited until just after 9 so it was warm enough to run in shorts, and most of the run shirtless. Wanted more vertical, but had to head from my house (Harmony/Timberline area), so decided to head out to Coyote Ridge and back, which would give me a mix of trails and roads, with multiple road options depending on mud conditions.

The first 1.5 miles of the future Powerline Trail-South (Keenland to Trilby) gave me hope for today's trail conditions: wet in spots, but just enough islands of dry dirt to keep my (road) shoes from getting completely caked in mud. Then, I headed straight West on Trilby, and then the mile south to Coyote Ridge, all of which provide good rollers.

I saw a few cars at the Coyote Ridge TH, and a woman getting ready to run/hike. "You're on a long one today!", that's what she said, literally, as she must have passed me in her car on the way to the TH. I headed up the ridge, and the mud wasn't too bad in the middle of the trail -- only a bit dicey in the usual shadowy and north-facing spots.

The trail was just barely on the edge of usable -- I do feel bad about mucking it up, though I stay on the trail and I'm certain the next rain and subsequent traffic will erase all evidence. However, the benefit was that I had it to myself: no mt. bikers, gapers, or rattlesnakes to dodge. Soon I dropped down Rimrock to the Blue Sky intersection, and it was clear that Blue Sky was a bit worse for the wear. I decided to give it a go to the North, thinking about an out-and-back but ready to turn around if necessary.

Except I didn't, . The trail was quite muddy, with some lingering snow, but once I got a mile into it (still staying on the trail, but having to be very careful on downhills!), I decided to finish it up, mostly being too lazy to turn around. Besides, there were human and dog tracks in front of me, and I was curious as to their owners.

Soon, I found them: A female runner/hiker, with her dog, Chloe, trailing her own leash through the mud. After I greeted them, she motioned to the dog:
"I'll get her, she's not a friendly dog!"

I smiled and nodded, but then processed the unusual negative: Nearly every dog owner says "Don't worry, he's a nice dog!", to the point of being meaningless, and they'll quickly get the leash out, even though I actually prefer keeping a well-behaved dog roaming free: it's more fun for the dog, and I think chaining up a dog and getting worried every time a runner goes by might actually create a negative association for the dog.

But I digress. This dog was advertised, unusually, as being not nice: "I don't want her to bite you!" I stopped running, the dog circled around me and growled, but we all remained calm and passed each other. Weird.

So I had the rest of the mud to myself. One thing that was a bit encouraging was that I felt fine, but I was able to see how much the mud slowed me down ("a lot", roughly), on a route I've run before. This means, quite easily, that the mud in Salida might have cost us all 20+ minutes over a "perfect" trail, which we all figured was academically true. But this proof was in the pudding!

Enough with the mud, I decided I'd take the asphalt down around the Horsetooth inlet rather than doubling back. This would also let me hit JJ's on the corner for a liquid refill. I finished my 2 PB&J sandwiches while cruising down the road, and saw a fair number of cyclists enjoying the day as well.

Oh, and one jerk that decided to speed past at ~50mph just a few feet from me, coming from behind (as I was on the left shoulder). The situation was thus (you might need a whiteboard, or various knick-knacks on your desk, to model this): me (pedestrian on left); line of 3 cars on the right, traveling same direction; distant car approaching opposite direction; several cyclists on far right shoulder, traveling same direction. A 4th, impatient SUV zooms past, shooting the gap between me and the 3rd car, scaring the crap out of me, and then keeps passing the other 2 cars, right as the first car swerves a few feet (legally, thank you) to give the cyclists some room; and ducks into his lane as oncoming car comes. Got that?

I'm not sure that passing near a pedestrain from behind is illegal, but with all those people out there, it just seems like bad karma.

Made it down to JJ's, $2 in hand. Cherry slurpee! Haven't had one of those in for-ever. For-ev-ER. Not since getting Icee's at Kmart as a kid, in Wisconsin. Awesome! Manna from heaven. Cold, slushy, high-fructose manna from heaven.

Feeling pretty good as I headed south down Taft, on the left sidewalk (right side didn't exist). Crossed an intersection, as a car cut left (from Taft onto neighborhood street) directly in front of me. WTF? I shouted "Hello?!", as the driver's window was wide open. The driver didn't even look at me. If she had a soul, she could have put up her hands in the "Whoops, sorry!" motion. She was dressed like she just came from church. I could be making that up, but angry side note anyway: I can run outside all morning on a beautiful day, mostly encounter friendly and interesting people in the community, and have little-to-no-chance of accidentally killing somebody else. I'm pretty happy about that.

One more side note: I don't run with headphones, and many ultra-runners similarly don't, much of the time. This is another good reason why. I knew that car was coming before I crossed into that lane, just like I knew that car was passing from behind. Given hundreds of hours and thousands of miles near the road, anyone will develop the ability to hear cars and judge their speed just by sound, or figure out traffic in peripheral vision, just like a fast skier or mountain biker can quickly assess traffic and terrain...because they're focused on survival. Sadly, no such requirement is put on driving, and when many of our citizens barely take the time to walk around town, it feels like fighting a losing battle.

But I digress again, as I soon had my last 5 or so miles of mostly car-free running, through delightfully rattlesnake-free Cathy Fromme prairie, the Clarendon Hills subdivision, and Fossil Creek. I got in in 4:10 or so, including stops, somewhere in the 27-28 mile range.

Anyway, my legs are feeling decent, and I hope I finally turned the corner from base-mileage to consistency and being able to recover more quickly. I did wilt a bit in the sun, which is usual for this time of year, so the next piece of the puzzle is heat training.
Posted by mike_hinterberg at 10:22 PM